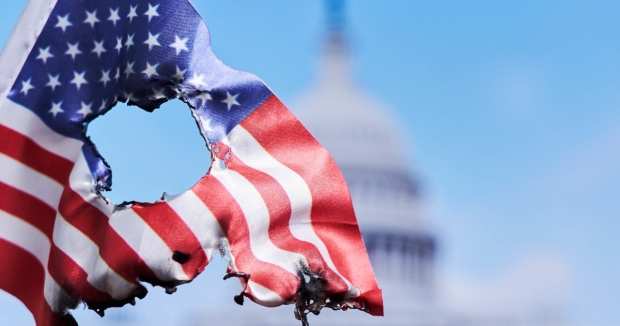 According to two surveys released on Friday, the majority of Republicans oppose and disapprove of the breach of the Capitol building.

While both surveys showed majorities against the breach, it is unclear what exactly accounted for the difference between the overwhelming majority in one survey and a modest majority in the other. However, Philip Bump of the Washington Post noted in a detailed analysis of both surveys that the PBS NewsHour poll asked about whether respondents supported the actions, while the HuffPost survey asked about approval.

Some Republicans were likely following the messages of the leaders of their party in Congress, such as Mitch McConnell, who called it a “failed insurrection” according to both left-rated and right-rated sources.

Unsurprisingly, opposition and disapproval among Independents and Democrats was high, above 90% in the case of Democrats.

Majority opposition or disapproval still means that a sizable minority supports or approves such actions and potentially violence, so a real danger for violence or confrontation remains. Yet that risk should be balanced with the knowledge that it is a minority opinion.

Other Overlaps in the Surveys

The surveys also found other overlaps between Democrats and Republicans, though some of their shared concerns are troubling for the future of a democratic republic.

The HuffPost survey found majorities in both parties (and a plurality of Independents) saying the breach is representative of a broader movement in society, rather than just an isolated incident.

The PBS NewsHour survey found more than 75% in both parties plus independents believe there is a serious threat to democracy. Yet the survey also provided a silver lining: supermajorities in both parties, including 85% of Democrats, believed that our democracy will survive.

“False Polarization” Among Democrats, and Trump Loyalty Among Republicans

The HuffPost survey found that more than 75% of Biden voters and Democrats believed that Trump supporters who breached the Capitol represent most supporters of the president.

Clearly this perception contradicts the results of the surveys, showing that majorities of Republicans, including Trump voters, opposed or disapproved of the breach. Additionally, HuffPost found a majority of Republicans and a plurality of Trump voters disagreed that those who breached the Capitol “represent people like me.”

The views of Democrats correspond to “false polarization” or “misperceived polarization,” findings that members of one party often view the other party as more extreme than they really are. These misperceptions can lead to a cycle of more extreme emotions and actions.

Researchers support spreading accurate information about the other political side to counteract these misperceptions, much like the top-line survey results presented in this article.

This result raises questions about what influence Trump can have after he leaves office. Even though his communication channels have been somewhat limited, especially given his permanent ban from Twitter, any ex-president will likely be able to find some viable mass communication options.

For now, any potential instigator of violence will face online companies that are increasingly assertive against platforms and violent speech. And majorities of potential audiences of Republicans are likely to be skeptical of physical force, as they disapprove of or oppose the Capitol breach.