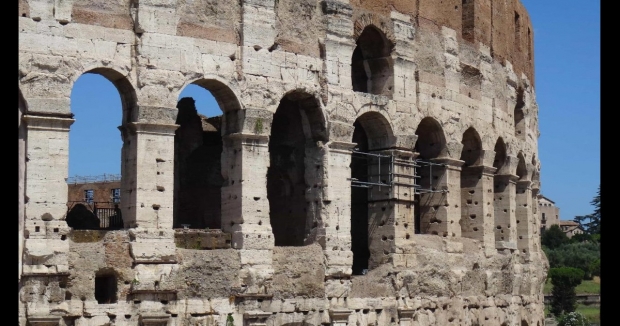 Blocks from a Hard Rock Cafe and nestled between graffitied buildings, the ruins of the Stoa Poikile sit, crumbling and nearly overtaken by greenery. Millennia before American brands dotted the streets of Athens, these ruins had served as the lecture hall for Zeno of Citium, the founder of an ancient philosophy called Stoicism.

Scholars have embarked upon a journey to revive Stoicism for a modern audience, and Professor Massimo Pigliucci, the author of How to Be a Stoic: Using Ancient Philosophy to Live a Modern Life, wrote an exceptional handbook, guided by the teachings of the Stoic philosopher Epictetus, for anyone interested in learning about Stoicism. While this book is primarily a roadmap for living a “modern life,” I was delighted to discover several insights into how Stoicism can help us navigate a polarized world. Here’s what I learned:

The Dichotomy of Control

Learning about the dichotomy of control instantly revolutionized my outlook on politics. Professor Pigliucci described the dichotomy of control as the understanding of “...what is and is not in our power...” Reinterpreted in the context of depolarization, this means that we should not waste our energy griping about election outcomes or fuming at the sight of a slanderous post by a political opponent. Instead, we should direct our energy towards things that we can control, such as exposing ourselves to varied perspectives, going out to vote, or even canvassing for a candidate.

Living According to Nature

“Living according to nature” was another invaluable insight from Professor Pigliucci’s book, and it essentially means embracing reason. The Stoics believed that reason must be applied to every facet of life, especially impressions. Professor Pigliucci wrote that Epictetus insisted “...that we look at ‘impressions’, that is, at our first reactions to what the world presents us with, and realize that in many cases they are not what they seem.”

Interestingly, a recent study published by professors from Harvard and Clemson revealed the timeless nature of Epictetus’ assertion. This study found that most Republicans and Democrats misperceive their political opponents as being more extreme and confrontational than they truly are. This means that our impressions about our political opponents are in fact “...not what they seem,” highlighting that we should follow the lead of the Stoics and, as Professor Pigliucci phrased it,  “reflect on our condition and truly make an effort to see things in a different light, one that is both more rational and more compassionate.”

Cosmopolitanism is another Stoic (and Cynic) concept relevant to depolarization. It is defined by Professor Pigliucci as  “...the idea that we ought to extend the sympathy we have for kin to our friends, acquaintances, fellow countrymen, and beyond to humanity at large…” Sympathy for our fellow countrymen is especially important for the depolarization movement, because our goal is to facilitate unity. Thus, cosmopolitanism reminds us to embrace our common humanity and ensure that the needs of all our fellow countrymen are addressed by the policies we champion.

Imagine if every American demonstrated these virtues. My guess is that more social issues would be addressed and the bonds between citizens would be strengthened, because we would all be dedicated to doing “the right thing,” treating others with “fairness and kindness,” and exercising “moderation and self-control in all spheres of life.” Or imagine if every politician treated their opponents with “fairness and kindness,” considered the complex nature of many policy decisions, and embraced the grey area, possessing the wisdom that the world is not “black and white.” Again, my guess is this would promote lasting, positive change as politicians would be willing to venture away from partisanship and towards the common ground buried within the grey area.

But what I just described seems more like a utopian fantasy than a realistic expectation. I must practice what I preach and apply the Stoic concept of reason to my own analysis. Thus, it is unreasonable to suggest that every American, including every politician, will embrace Stoicism. Stoicism requires dedication and time. Not to mention, social media, polarization, biased news, and misinformation further complicate the path towards model citizenship. However, those who are willing to adopt these virtues will hopefully serve as positive influences on their communities and as role models for their fellow Americans.

As we continue to live in a complex and sometimes perplexing world, one marred by disease and polarization, I’ll leave you with one last piece of wisdom from Epictetus himself: “make the best of what is in our power, and take the rest as it occurs.”

This piece was edited by AllSides.com Managing Editor Henry A. Brechter (Center bias), and was reviewed by James Coan (Center). Correspondence can be directed to james@allsides.com.