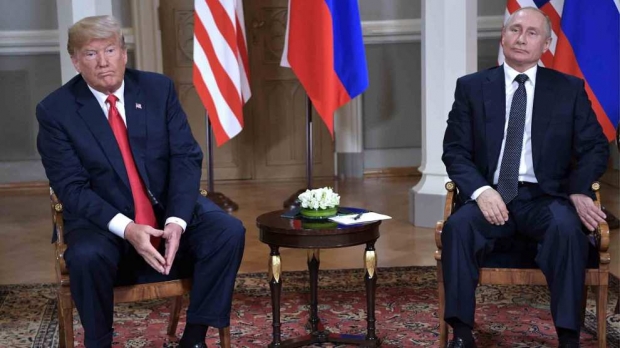 After meeting with Russian President Vladimir Putin in Helsinki, President Trump sparked bipartisan outrage when he publicly accepted Putin's denials of election meddling. He later backtracked, stating that he meant to say the opposite. While his remarks received criticism across the aisle, some say this shows he is guilty of collusion, while others argue that such accusations are overdramatic.
Check out some other big stories this week: Russian Intelligence Officers Charged with Meddling in 2016 U.S. Election, Peter Strzok Testifies to Congress About Anti-Trump Bias, and Trump Holds Joint Press Conference with Teresa May.
Snippets from the Left
In Helsinki, Trump Shows He Is Indeed Guilty of Collusion
Mother Jones
"Since being elected president, Donald Trump has vociferously claimed he engaged in 'no collusion' with Vladimir Putin’s attack on the 2016 US election and that the investigation of any interactions between him and his associates and Russians was a 'witch hunt' or a 'rigged witch hunt.' Yet his historic Helsinki summit with Putin—and particularly the unsettling joint press conference they held—provided a clear indication that Trump is indeed guilty of one form of collusion: colluding with Putin to cover up Moscow’s criminal assault on American democracy.
...
It seems likely—in fact, highly probable—they talked about what they would say on this subject during the post-meeting press conference. (The public cannot be sure of this, because no one else, besides interpreters, attended the session, and no transcript has been released.) Yet the events of the past two years already indict Trump: he has repeatedly aided Putin’s attempt to escape responsibility for the attack. And today, the two men issued respective messages—which might have been coordinated—that each supported and advanced Russian disinformation.
There you have it. Collusion. Trump working with Putin, in the open, to make the Russian attack on the United States disappear. Trump himself has proven the case."
Snippets from the Center
Trump voices support for U.S. intelligence a day after fueling bipartisan outrage with Putin comments
USA Today
"Trump spoke before a meeting with Republican members of the House Ways and Means Committee a day after he faced bipartisan criticism for pro-Putin comments at Monday's summit in Helsinki.
The president said both the United States and Russia were to blame for frosty relations, and he accepted Putin's denial of Moscow's interference in the election despite the conclusions of the U.S. intelligence community.
...
Trump said he reviewed a video of his remarks with Putin after seeing the negative attention they received. He said that he misspoke during the news conference and that he meant to say he saw no reason why it 'wouldn't' be Russia that interfered in the election.
...
Republicans said Putin has long sought to divide Western countries he sees as rivals and Trump's comments played into that agenda.
Snippets from the Right
Trump critics outdo each other with melodramatic analysis of Trump-Putin press conference
Washington Examiner
"For Trump critics, there is no need for hyperbole. There’s no need to oversell the story.
...
The American president, for example, made a fool of himself this week in Helsinki during a joint press conference with Russian President Vladimir Putin. His slavish deference to Putin says more about the president than any critic could. The president’s words and deeds don’t need much additional commentary.
But certain Trump critics just can't help themselves. People like MSNBC contributor and former Watergate prosecutor Jill Wine-Banks can't resist the urge to outdo the president in terms of outlandish and shocking rhetoric.
Russia’s election interference is 'just as serious to me as the Cuban Missile Crisis in terms of an attack or the 9/11 attack,' former Watergate prosecutor Jill Wine-Banks told MSNBC’s Ali Velshi.
...
Because if election interference is indeed an act of war, one that apparently necessitates a military response on par with what the U.S. did after Pearl Harbor and the Sept. 11 attacks, I can think of at least one major country that has stuck its fingers in several election pies throughout the globe. Here’s hoping the many affected countries don’t believe this sort of thing deserves a military response."
Discover more on this topic on AllSides.
Russia, Donald Trump, Vladimir Putin, Story Of The Week, News