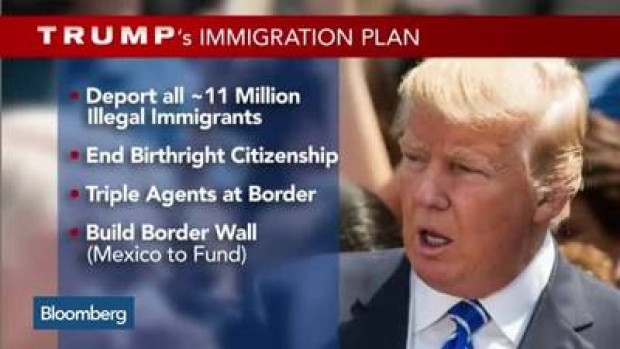 In this week's headlines, we’ve seen a lot about Trump expressing a shift in the topic he’s been famous for in his campaign: immigration. He spoke of “softening” on deportations and that he’d like to “work with” non-criminal undocumented immigrants. How is this being received? Does it represent flip-flopping, is it a disappointment, or is it a smart, welcome change? Today we bring you a few different perspectives, including one from the Center that compares the immigration policies of Trump, Clinton, and Obama.
See other news featured by AllSides such as Clinton Foundation Becomes Campaign Issue, Massive Earthquake in Central Italy, Trump Courts Black Voters and the latest AllSides News.
Snippets from the Left
Donald Trump Has A Completely Different Immigration Position Every Day
Huffington Post
“The continual problem with understanding Trump’s position on immigration ― or any of his policies, for that matter ― is how often he contradicts himself and how vaguely he speaks about it.
For most of his campaign thus far, his immigration plan has boiled down to building a wall along the U.S.-Mexico border and ‘rounding up’ all undocumented immigrants.
Only recently have he and his campaign even begun to specify what a Trump immigration plan might look like. On Tuesday, a Trump aide told The Huffington Post that the GOP nominee never meant mass deportations but instead wants to enforce existing immigration laws and focus on getting rid of undocumented immigrants with criminal backgrounds.”
Snippets from the Right
Ann Coulter Criticizes Trump’s Immigration Pivot — Then Appears to Come Around
TheBlaze
“In her book, Coulter wrote, ‘There's nothing Trump can do that won't be forgiven. Except change his immigration policies.’
However, after Trump softened his tone, Coulter appeared to as well.
‘I don't think it is a change in policy,’ Coulter said of Trump’s new position in an interview with the Washington Examiner.
‘The policy is anyone who's here illegally is here illegally, does not have the right to be here,’ she said. ‘We'll decide whether it's in our interest to let them stay or not. Perhaps it is in our interest to let some of them stay.’”
Snippets from the Center
Trump, Clinton, Obama: How do their immigration plans stack up
Christian Science Monitor
“He also called for international efforts to cut off funding to terrorist groups, expanded intelligence sharing, and cyberwarfare — all steps that are part of the existing White House strategy.
Trump broke with current policy, though, in calling for sharp new limits on visitors and immigrants from countries with a history of exporting terrorism. ‘We will be tough and we will be even extreme,’ Trump said. ‘Our country has enough problems. We don't need more.’
Trump did not renew his controversial call for a ban on all Muslim immigrants. But he did advocate a new ideological test for newcomers, backed by what he described as ‘extreme vetting.’”
Discover more on this topic on AllSides.
Story Of The Week, News, Donald Trump, Immigration, Deportations