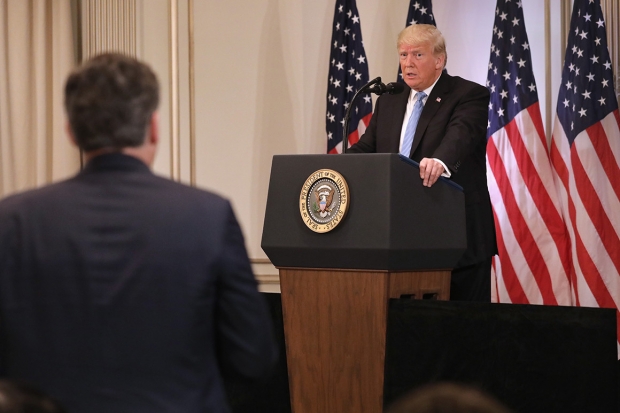 CNN has filed a lawsuit against the Trump administration after White House correspondent Jim Acosta's press credentials were revoked following a contentious exchange with President Trump. Some have said the move violates Acosta's free speech, alleging Trump suspended Acosta's pass based on the content of his questioning. Others contend it was Acosta's behavior that rightly cost him his credentials, as he is often accused of grandstanding during press briefings.
Nervous about those inevitable political discussions that happen at Thanksgiving dinner? Take a look at our suggestions for how to navigate tricky conversations with your political other.
After a deeply polarized election, what's next for the U.S.? Americans of all stripes are joining in-person or virtual conversations in which we #ListenFirst to understand. Join us for a 3-day conversation event.
Check out some other big stories this week: Report: Facebook Paid Political Consulting Group to Discredit Critics, House Democrats Reportedly Preparing 'Subpoena Cannon' to Probe Trump, and Matthew Whittaker Replaces Jeff Sessions as Attorney General.
Snippets from the Left
Donald Trump and Jim Acosta, a Love Story
Politico
"If CNN reporter Jim Acosta is such a troublous force inside the White House Briefing Room—a 'rude, terrible person' as President Donald Trump recently put it—deserving of being banned from White House grounds, then why did Trump and press secretary Sarah Huckabee Sanders routinely call on him during the televised question and answer periods at the White House over the past 22 months?
...
Acosta’s forced exile and the lawsuit filed by CNN today demanding that Sanders and Trump return the “hard pass” that will allow him to roam the White House grounds have turned him into a free speech martyr, which I suppose he is. Like all First Amendment radicals, I deplore the Acosta ban and look forward to the day that he’s back in the White House making a pest of himself again.
...
Like so many episodes of The Trump Show, the martyrdom of Jim Acosta provides an entertaining sideshow. While it’s true that he’s more of a pain in the neck than a true newshawk, we can still call for his return to the White House briefing room in good conscience because being a pain in the neck is often a necessary part of the job. Besides, Sanders and Trump already miss him."
Snippets from the Right
Trump was right to boot CNN's Jim Acosta out of the White House
Washington Times
"To hear members of the White House press corps tell it, at stake is the First Amendment, the Fifth Amendment, and perhaps the very future of America as we know it. In reality, it’s nothing of the kind.
There was no blue wave. If there had been, Democrats would have gained control of the Senate.
...
To recap, Mr. Acosta had refused to allow other reporters attending the presidential press conference to ask questions by refusing to hand back the microphone in a grandstanding display (a move former President George W. Bush used to call “peacocking”). And he really didn’t want Mr. Trump to answer, anyway, he was there to make biased statement after biased statement.
...
Mr. Acosta’s just a snotty little brat who needs a timeout. Now, he’s having one. And that’s actually a good thing. To CNN, the message is clear: Bring a grown-up to the White House. Until then, sit quietly in the corner and think about what you did wrong."
Snippets from the Center
Judge will decide Friday whether to force White House to restore press credential to CNN's Jim Acosta
USA TODAY
"A federal judge postponed until Friday a decision on whether the White House violated the First Amendment by taking away a CNN reporter’s press pass after his contentious exchange with President Donald Trump.
...
The White House argued that the revocation was lawful because Acosta “disrupted the fair and orderly administration of a press conference during an exchange with the president.” The White House said no reporter has a First Amendment right to access to the grounds, and that CNN has 50 other workers with White House credentials.
CNN asked the court to force the White House to restore Acosta’s credentials. The network's lawyers argued that the administration’s decision to kick him out violated the First Amendment and his due process rights, and that the White House had offered no notice or opportunity to fight the decision."
Discover more on this topic on AllSides.
Free Speech, Jim Acosta, Donald Trump, CNN, Media Bias, Story of the Week, News