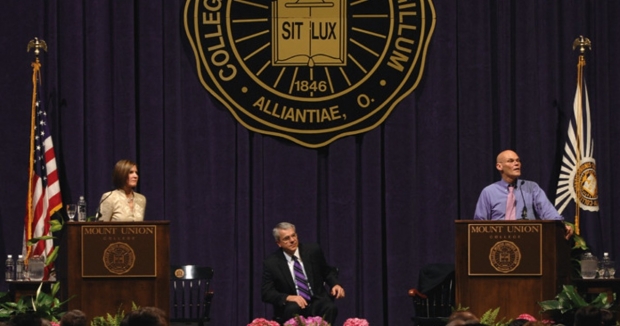 A View from the Left

This piece is from a writer rated Lean Left.

The relationship began when they were political rivals. Mary Matalin was a campaign director for Republican George H.W. Bush. James Carville was the chief strategist for Democrat Bill Clinton.

Yet at the start of Bill Clinton's Administration, these advisers from opposite political parties not only became close, but they married. Both were in their 40s when they married in 1993, a union that has thrived ever since.

Many political consultants create negative ads. Both Matalin and Carville fought for their sides aggressively, sometimes causing controversy with certain approaches. One of her press releases for George H.W. Bush for president caused an uproar in 1992. Also in 1992, Bill Clinton’s presidential campaign (for which Carville worked) was described as more military and warlike than political.

Throughout the years, in interviews and in their 2014 best-selling book “Love & War: Twenty Years, Three Presidents, Two Daughters, and One Louisiana Home,” both offered experience and wisdom for couples in marriages and in bipartisan relationships.

On her marriage, Matalin said that they disagree on policy and the role and scope of government, "but our love for policy and politics and the need for informed citizenry and participatory democracy is the same." In another interview, she said, "I respect his politics. He's not right, but not being right doesn't make him the wrong man for me. You just got to respect where the other guy is coming from. I know why I'm a Conservative. I know why he's a liberal."

She went on to say, "What I most love about my husband has nothing to do with politics. He helps everybody. He's a giant soul."

Carville, the Democrat, explained their
marriage this way: "Sure, we have the Republican-versus-Democrat dynamic, sleeping with the enemy, however, you want to describe it. It's true that I don't agree with her politics, but we agree on plenty of other things. I got married when I was forty-nine years old. I didn't enter into that lightly."

Offering some reasons why he chose Matalin to be his wife, he said, "She is
very smart and very loyal. She has a really broad skill set. She almost likes to go against the wind."

And after nearly three decades together, Carville believes that they "have an advantage over a lot of people because we're in love with each other."

Matalin no longer considers herself a Republican, but their politics are still different. In 2016, Matalin registered as a Libertarian. Her explanation: "Because I'm a Republican in the Jeffersonian, Madisonian sense," she said. "I'm not a Republican for party or a person, and the Libertarian Party represents — continues to represent — those constitutional principles that I agree with."

An example of a recent political disagreement came when Carville did not mince words as he said that "his mission is to help extract" President Trump. On the other hand, Mary Matalin is "super proud of President Trump" for stopping what she called “traffic from China” to stop the further spread of the "virus from China."

Each has recommendations for others to start and maintain relationships across political divides.

On bipartisan relationships, Carville advises people to spend some time in places that don't "sustain your own point of view" because “there might be things you find out that you can agree on." He recommends to not get "stuck in a validating cycle." He supports closing the political disconnect with "members of one party ... coming into personal contact with those in the other."

And while Matalin explains that she feels comfortable suggesting the use of data to support arguments, she further advises having a face-to-face conversation with your neighbor. She recommends dialogue between white and black people. And, she recommends going to that conversation without presumptions about how the other feels about you.

Collectively Matalin and Carville show that they have much in common, despite political differences. In their book, they share their deep love of New Orleans' identifiable food, music, architecture, social structure, and even the funerals. They are parents to two daughters, Matalin and Emerson.

Matalin and Carville remain happily married, and they have even renewed their vows several times.