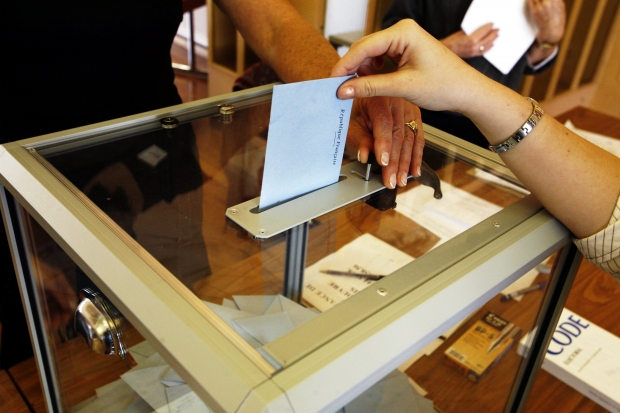 Six days ago Gallup published a poll showing two-thirds of Americans feel that the presidential election process is broken. Meanwhile, at a journalism award dinner, President Obama critiqued the media for it’s role in how this year’s election has played out.  In light of these stories, it seemed like a good week to look at the current American presidential election process from a few different viewpoints.
New Feature: AllSides DialogsEngage in dialogs with civility and reason. AllSides Dialogs offers a great alternative to the crude, thoughtless comments you generally find online. Vote and share your side here:
Should the Republican candidates pledge to support the eventual nominee? Find other dialogs here.
See other news featured by AllSides such as Trump Backtracks on Abortion Comments, GOP Candidates Back Away From Pledge, GA Governor Vetoes Religious Freedom Bill and the latest AllSides News.
Snippets from the Right
Political hatefest: Why the media—and the candidates—are dragging down the campaign
Fox News
“We are now at the point in this political season where everyone is hating on everyone else.Think about it: When was the last time you saw a piece or watched a segment in which a candidate was portrayed positively?
Presidential campaigns are a tough business where every contender gets roughed up as the price of admission. But the level of vitriol—the pundits against Donald Trump and his rivals, and the candidates sliming each other—has spiraled way out of control.
It hasn’t been Morning in America for a long time. In fact, it’s pretty close to a dark and stormy midnight.
And the hyperspeed news cycle has all this unfolding at a head-snapping pace, like an endless feed of Twitter taunts.…This is a reality show campaign in which reality, perhaps in the form of terror attacks, sometimes intrudes. It is endlessly entertaining, but often feels like tragicomedy with no heroes.”
Snippets from the Left
This is only the beginning: Nate Silver explains how Donald Trump has “hacked the system” and created a roadmap for future political con men
Salon
“‘Trump has been able to disrupt the news pretty much any time he wants,’ Silver wrote, ‘whether by being newsworthy, offensive, salacious or entertaining. The media has almost always played along.’
Of course, the press has played along – it can’t do otherwise. A corporatized media has turned citizens into consumers, and politicians into products. Trump understands this and he acts accordingly – it’s really quite simple. His whole career has been about brand management, which is now all the training a national politician needs.
…Put another way, Trump has hacked the system and exposed the weaknesses in American political institutions. He’s uncovered profound flaws in the Republican Party. He’s demonstrated that third-rail issues like racism and nationalism can still be a potent political force. He’s exploited the media’s goodwill and taken advantage of the lack of trust the American public has in journalism.”
Snippets from the Center
Republicans Sour on Way Election Process Is Working
Gallup
“It is unclear from the data if partisans are reacting to the developments in their own party's nomination race, the other party's nomination race or both. Republicans' increasingly dour sentiments may be related to Trump -- either the increasing inevitability that he will gain his party's nomination, or the way controversial aspects of his campaign have dominated the news. Trump is the least popular Republican nominee among members of his own party in recent elections going back to 1996, and he is much less well-liked than Hillary Clinton is among Democrats. Democrats' more stable but still cynical views may be based on their views of what is happening on the GOP side, or they may not be pleased with something about their own party's campaign.
Another factor could be the increasingly contentious campaigns, particularly on the Republican side, where personal attacks have been an almost daily occurrence and violence between supporters and protestors has broken out at some Trump rallies.”
Discover more on this topic on AllSides.
News, Election, Election: Presidential