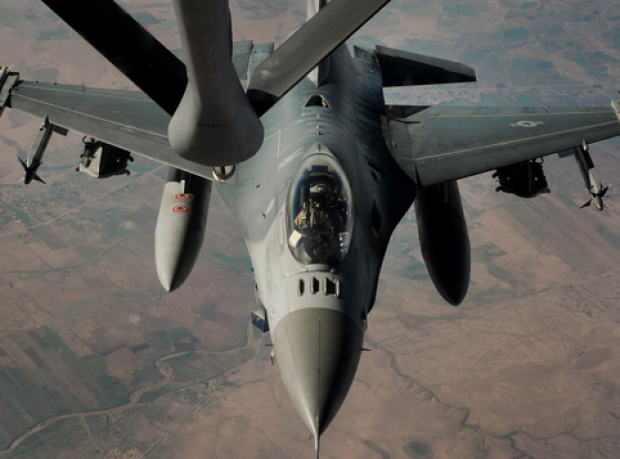 Russia started airstrikes in Syria this week, claiming to target ISIS. The U.S., also carrying out airstrikes in Syria, has expressed doubts about Russia's true motives. Some believe Russia is instead supporting Assad by aiming for Syrian rebels. With a great deal at stake, the Obama administration launched military-to-military talks with Russia today. Let’s see what’s being said about all this across the media’s political spectrum…
See other news featured by AllSides such as Planned Parenthood to Testify, Obama Addresses U.N. and the latest AllSides News.
Snippets from the Left-Center
Obama administration scrambles as Russia attempts to seize initiative in Syria

“Blindsided by the unexpected swiftness of Russia’s air attacks in Syria, the Obama administration scrambled Wednesday to retake the diplomatic and military initiatives, saying that it would not be bullied into supporting President Bashar al-Assad and that it was about to significantly expand its own Syrian air operations.
After spending much of the day together here behind closed doors, Secretary of State John F. Kerry and his Russian counterpart, Sergei Lavrov, said in terse evening statements that U.S. and Russian military officials would meet, perhaps as soon as Thursday, to ‘deconflict’ their operations in Syria.”
Snippets from the Right
Confusion hangs over start of US, Russia military talks on Syria
Fox News
“Exactly which groups Russia is hitting is becoming a critical question, especially as human rights groups said their airstrikes targeted U.S.-backed rebels. Pentagon Press Secretary Peter Cook, asked at an afternoon briefing if he could rule out the possibility that U.S.-backed rebels were hit, answered: ‘I can't say that with certainty.’
McCain issued a blistering statement criticizing the effort to offer Russia a role.
‘It is simply incomprehensible that the Administration is taking such great pains to offer Russia a 'constructive' role in Syria, pretending that Russia has the slightest interest in anything other than propping up the murderous Assad regime,’ he said.”
Snippets from the Center
Syrian Opposition Says Russian Airstrikes Aren't Targeting ISIS
NPR
“Russia says it has carried out at least 20 airstrikes in Syria. But many of those attacks hit areas miles from the ISIS strongholds that were initially named as targets. Syria's opposition says Russian forces are hitting any opponents of President Bashar Assad — and that civilians are paying a price.
‘We want clear condemnation for the Russian brutality, and we want protection for the civilians,’ Khaled Khoja, leader of the anti-Assad Syrian National Council, said at a news conference in New York.
Criticism that Russia is targeting rebel groups in Syria began soon after the airstrikes started Wednesday.”
Discover more on this topic on AllSides.
News, Syria, Russia