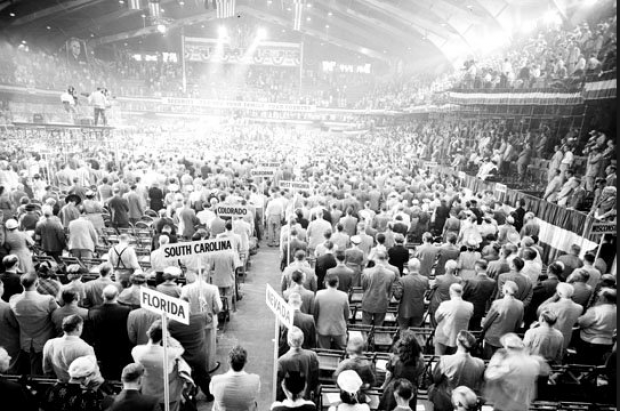 When Donald Trump lost the Ohio primary this week, it increased the possibility that he won't have enough delegates to secure the nomination before the July convention. CNN has just published a story about a group of conservative leaders calling for a GOP unity ticket and advocating a convention fight to stop Trump. The GOP could be headed for a contested convention that becomes a brokered convention. This story calls, again, for at least four different viewpoints, as there are views on the Right for and against the idea of creating a new front-runner at the GOP convention.
See other news featured by AllSides such as Rubio Drops Out, Hillary Scores Big Wins, Judge Merrick Garland Chosen, Kerry Calls ISIS Atrocities Genocide and the latest AllSides News.
Snippets from the Right
Trump's Super Night: Now the GOP is betting on convention chaos
Fox News
“Conservative New York Times columnist Ross Douthat takes a whack at this argument, saying the ‘officially neutral press’ will warn about the ‘bad optics’ of denying Trump the nomination and the ‘backlash’ to follow.
‘The less-than-democratic side of party nominations is a virtue of our system, not a flaw, and it has often been a necessary check on the passions (Trumpian or otherwise) that mass democracy constantly threatens to unleash.’
Douthat compares Trump to Barry Goldwater and George McGovern, who led their parties to historic defeats, but says The Donald is different because he’s ‘an authoritarian, not an ideologue.’
‘So in Cleveland this summer, the men and women of the Republican Party may face a straightforward choice: Betray the large minority of Republicans who cast their votes for Trump, or betray their obligations to their country.’”
Snippets from the Right: Pro Trump Viewpoint
It's Time To Make America Great Again, Period
Town Hall
““The time has come to admit the truth and coalesce behind the Republican frontrunner Donald Trump.  This is no longer about Republicans or Democrats, moderates or liberals; this is about the existence of America in the world as we know it.  World leaders, politicians, and the media all gave it their best shot to bring down Trump with lies and deception, but they all failed.
…Trump has a fire inside of him that we have not seen in our lifetimes.  He defines patriotism and has laid down everything he holds dear to sacrifice for his country.  He truly loves the American dream and has realized leaving it in the state it's in now would be unsatisfactory for an already storied life.  He wants to do more for his country before time runs out.
Before writing Donald Trump off as the rich businessman from Queens, N.Y., ask yourself, what's best for America?”
Snippets from the Left Leaning
To defend our democracy against Trump, the GOP must aim for a brokered convention
Washington Post
“…the country needs two healthy parties and, ideally, a contest of ideas and ideology — not a slugfest of insults and bigotry. Mr. Trump’s emergence already has done grave damage to American civility at home and prestige abroad. The cost of a Trump nomination would be far higher.
On Wednesday, Mr. Trump offered what was meant as an argument for his nomination. If he reaches the convention with a lead short of an outright majority, and then fails to win, ‘I think you’d have riots,’ Mr. Trump said. ‘I think you’d have problems like you’ve never seen before. I think bad things would happen.’
A democrat disavows violence; a demagogue wields it as a threat. The Republican Party should recognize the difference and act on it before it is too late.”
Snippets from the Center
7 things you need to know about a contested convention
CNN
“How does a contested convention become a brokered convention?
Simple: If no candidate arrives in Cleveland with a majority, then the convention is considered ‘contested.’ If, for example, Trump is within 100 votes of 1,237, then there is a possibility he convinces enough uncommitted delegates to lock up the nomination on the first ballot. Ford defeated Reagan in 1976 by similar means.
But if no one emerges with the magic number after that first ballot, the real action begins.”
Discover more on this topic on AllSides.
GOP Convention, Republican National Convention, Donald Trump, Republican Party, GOP