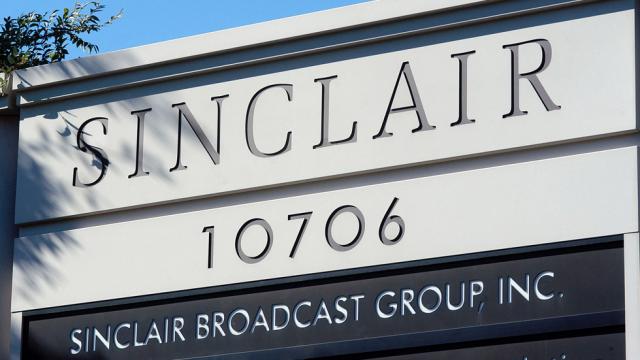 Sinclair Broadcasting required its local news anchors to read from an identical script warning against false news and criticizing the mainstream media for "irresponsible, one-sided news stories." Many on the Left denounced the network for displaying conservative bias, while some on the Right argued that such criticism is a double standard.
Take a look at some other big stories this week: Mueller Says Trump is Currently Not Criminal Target in Russia Probe, Trump Says He Will Deploy Military to Guard Border Until Wall Is Built, and Laura Ingraham Facing Boycott Over David Hogg Tweet.
Snippets from the Center
Sinclair requiring anchors to read new promo slamming 'one-sided news stories': report
The Hill
"Sinclair Broadcasting Corp. is requiring news anchors at its local TV stations to take part in a new promotional campaign that slams national media outlets for sharing “fake stories,” according to a new report.
CNN reported on Wednesday that the script for the promotional campaign begins with local anchors praising the 'quality, balanced journalism' produced by local stations, but then pivots to the 'troubling trend of irresponsible, one-sided news stories plaguing our country.'
...
'Unfortunately, some members of the national media are using their platforms to push their own personal bias and agenda to control 'exactly what people think' ... This is extremely dangerous to our democracy.' The script then has anchors say they 'understand Truth is neither politically ‘left or right.''
...
The broadcaster is known for its right-of-center slant and requires stations across the U.S. to run segments that often include conservative video op-eds. It’s also known for featuring top conservatives, and hired former Trump spokesman Boris Epshteyn last year."
Snippets from the Right
Sinclair Broadcast Group's 'fake news' promo guilty of carrying water for Trump by the liberal media
Washington Examiner
"Mainstream media outlets and personalities, expectedly, freaked out over the promo, pointing out how President Trump is weaponizing the media (i.e. Sinclair Broadcast Group) against every other publication and news channel.
...
Under eight years of former President Barack Obama and, arguably, the 18 months of Hillary Clinton's presidential campaign, it's hard to ignore that virtually every mainstream media outlet – certainly the most credible ones by today's standards – carried water for the Democratic Party.
Right now, the shoe is on the other foot. Democrats are mad that their side doesn't control any branch of government. But they're wrong, they still have power of the Fourth Estate: the media.
...
So yes, criticize the Sinclair Broadcast Group. But don't let the others off the hook. Neither one should be patsies for the president, regardless of party. No matter how much you like the president, whether it be Obama or Trump, you should always try to hold them accountable for the actions they carry out in office."
Snippets from the Left
Sinclair Broadcasting Orders Local Anchors To Record Bizarre ‘Hostage’ Video
HuffPost
"It’s being slammed on Twitter as a 'hostage' video.
...
Sinclair is also requiring its stations to run segments from Boris Epshteyn, a former advisor to President Donald Trump, who often speaks in support of the White House, the newspaper reported.
Sinclair has been accused of being too close to Trump in other ways as well.
In 2016, Jared Kushner, president’s son-in-law and adviser, said the campaign had struck a deal with Sinclair to give the network more access in exchange for running interviews with Trump without commentary, Politico reported.
...
Sinclair is currently in the process of purchasing Tribune media, a deal that would give it access to 42 more stations. Once complete, Sinclair will reach 72 percent of U.S. households."
Discover more on this topic on AllSides.
Tags:
fake news
Media Bias
Sinclair Broadcasting
Story of the Week
News

END_OF_DOCUMENT_TOKEN_TO_BE_REPLACED
Go ad-free!   About these ads