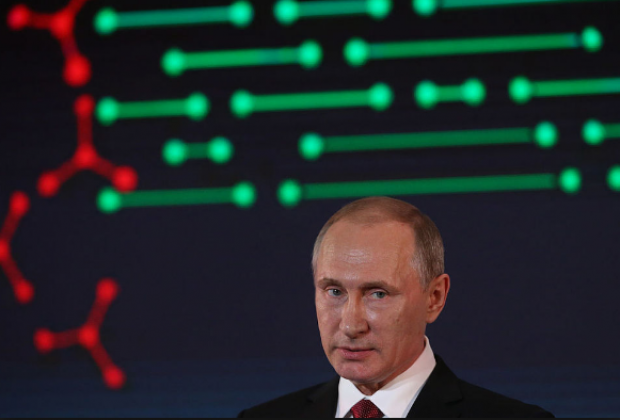 Our relationship and future path with Russia has been a consistent undercurrent in much of the news this week. First there was Donald Trump's pick of Rex Tillerson for Secretary of State and the mixed reactions to that cabinet pick. Some applauded Tillerson's extensive international experience building relationships with foreign leaders as ExxonMobil's CEO while others were very concerned with his lack of political experience and especially his close ties and strong relationships with Russia and its President Vladimir Putin.
And then this morning NBC News reported two unnamed intelligence sources linking Russian President Putin personally to the cyber hacks to influence the US Presidential election. Earlier there were conflicting reports about Russian involvement and intent, with the CIA and FBI not in agreement, Trump questioning this "conspiracy theory", and Congress demanding more information but being told to wait for further analysis.
See other news featured by AllSides such as Rep. Ryan Zinke for Interior, Trump Taps Rick Perry for Energy, Tillerson Likely for State and the latest AllSides News.
Snippets from the Left
The Perfect Weapon: How Russian Cyberpower Invaded the U.S.
The New York Times
"Like another famous American election scandal, it started with a break-in at the D.N.C. The first time, 44 years ago at the committee’s old offices in the Watergate complex, the burglars planted listening devices and jimmied a filing cabinet. This time, the burglary was conducted from afar, directed by the Kremlin, with spear-phishing emails and zeros and ones.
An examination by The Times of the Russian operation — based on interviews with dozens of players targeted in the attack, intelligence officials who investigated it and Obama administration officials who deliberated over the best response — reveals a series of missed signals, slow responses and a continuing underestimation of the seriousness of the cyberattack."
Snippets from the Right
Top intel office not on same page as CIA regarding Russia hack assessment
Fox News
"Fox News is told that several U.S. election-related hacking incidents are being wrongly lumped together, when they should be treated as separate events -- these cover breaches at the Democratic National Committee and another campaign arm; in a top Hillary Clinton campaign official’s email account; and at state election boards.
Reuters reports that while the ODNI does not dispute the CIA’s general analysis on Russia hacking, the office is not convinced of the evidence that Moscow sought specifically to help Trump defeat Democratic opponent Clinton.
The government source told Fox News the discrepancy comes down to Russia’s intent."
Snippets from the Center
The good, bad and ugly of warmer US-Russia relations
CNN
"The President-elect's Russian gambit seems like a solid foreign policy goal, given that the estrangement between the rivals -- owners of the world's biggest nuclear arsenals -- is deeper than at any time since the Cold War.
An improvement in relations could yield gains for the United States in reviving non-proliferation projects and closer anti-terrorism cooperation.
But there are big questions about whether Trump will be any more successful than his predecessors, whose initial inroads eventually foundered largely due to the behavior of President Vladimir Putin, and whether he will end up emboldening a leader that many -- including key Republicans in Congress -- see as a top US adversary."
Discover more on this topic on AllSides.
Story Of The Week, News, Russia, Donald Trump