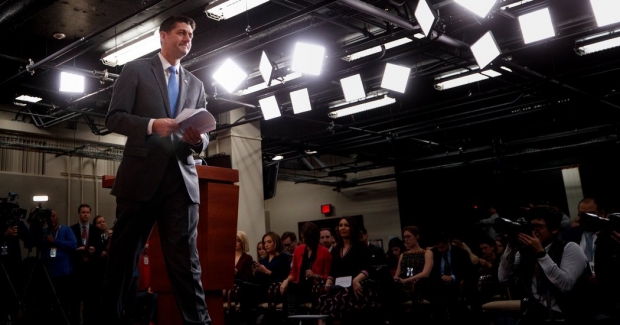 Paul Ryan announced on Wednesday that he will not seek re-election in November. The move sparked debate around Republican odds in the 2018 midterms as well as speculation concerning Ryan's tenuous relationship with President Trump.
What's the best way to combat media bias? Does unbiased news really exist? Check out this article in the Washington Examiner by AllSides CEO John Gable and Editorial Director Billy Binion about consuming a balanced news diet.
Join us for the National Week of Conversation, a week-long event from April 20-28 where Americans with differing viewpoints have conversations that prioritize listening first to understand those we tend to think of as “the other.” Attend a conversation in person or sign up for an online Mismatch conversation where AllSides sets up a structured video conversation between you and your “mismatch”.
Take a look at some other big stories this week: Kevin Williamson's Firing Sparks Debate on Media Bias, Democrats and Republicans Issue Warnings to White House Against Firing Mueller, and Mark Zuckerberg Arrives on Capitol Hill.
Snippets from the Left
Ryan Found Himself on the Margins as G.O.P. Embraces Trump
The New York Times
"Mr. Ryan announced his departure on Wednesday with the gaps in the party as evident as ever, but drawn along new fault lines, with nativists and populists following the lead of President Trump, pitted against what remains of Mr. Ryan’s brand of traditional conservatism.
The speaker, who once dreamed of a more inclusive party, open to black, Latino and immigrant voters enticed by a youthful, optimistic vision, was being left behind.
...
But his move, which will undoubtedly make life harder for his Republican colleagues seeking re-election, prompted instant speculation that there were deeper, unstated reasons. For the past year, Mr. Ryan has navigated a very delicate relationship with the president, after working hard to distance himself from Mr. Trump during his 2016 campaign.
An ardent free trade advocate, Mr. Ryan could only watch as Mr. Trump pulled the United States out of the Trans-Pacific Partnership, a massive trade deal that the speaker had supported, and as he moved to impose tariffs on steel, aluminum and goods from China. A lifelong advocate of relaxed immigration laws, Mr. Ryan did little to stop the hard-liners who backed Mr. Trump’s crackdowns and pushed for his wall on the southern border with Mexico. An advocate for federal law enforcement, he was bulldozed by those in his conference eager to attack the F.B.I. and Justice Department at the president’s behest."
Snippets from the Right
Paul Ryan quit in frustration, but that hardly means Republicans are doomed
Fox News
"Paul Ryan is one of those rare politicians who really does want to spend more time with his family. But there's more to his decision to relinquish power than that.
His frustration in trying to work with President Trump, despite their clashing agendas, was in my view a significant factor in yesterday's announcement that he isn't running for reelection, essentially abdicating as House speaker.
...
Now I'm sure the GOP's challenging prospects in the midterms crossed the congressman's mind, despite his demurral yesterday. But he’s not the typical power-hungry pol, so I don't think that's his main motivation. Nor do I believe Ryan's absence on the ballot will hurt other Republican candidates, except perhaps for the loss of his fundraising prowess.
...
The larger question is whether anyone can run the fractious House GOP. Three years ago, John Boehner quit in frustration. Now Paul Ryan is quitting in frustration. The party's divide is so deep that speaker—or if they lose, minority leader—may be the ultimate thankless job."
Snippets from the Center
House Speaker Ryan to quit, shaking Republicans as elections near
Reuters
"By triggering a House leadership struggle when the party should focus on defending its congressional majorities and advancing Trump’s agenda, Ryan dismayed some Republicans already concerned about their prospects with U.S. voters in November.
...
Trump’s 2018 agenda, including construction of a U.S.-Mexico border wall and an infrastructure proposal, has gained little traction. Ryan’s departure will not likely improve the outlook, said John Feehery, a Republican lobbyist who worked as spokesman for former House Speaker Dennis Hastert.
...
The Republicans’ biggest policy win since Trump took office almost 15 months ago has been the tax overhaul approved in December, an achievement in which Ryan played a major role despite his sometimes strained relationship with the volatile president.
Asked how much Trump and his conduct influenced his decision not to seek re-election for his seat representing a district in southeastern Wisconsin, Ryan told reporters: 'Not at all.'"
Discover more on this topic on AllSides.
US House, Elections, Paul Ryan, Story Of The Week, News