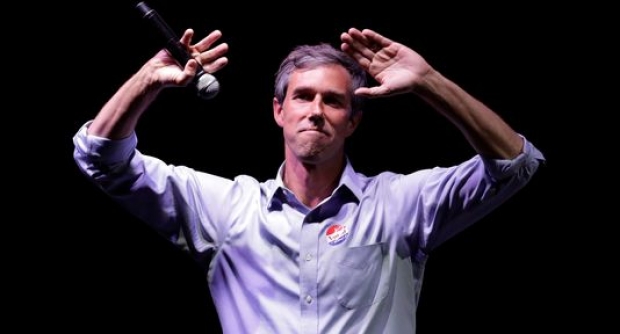 With the close of the 2018 midterm elections, Democrats will take control of the House, while Republicans will expand their Senate majority.
Some lauded the campaign successes of Democrats, who will now have the power to exert a check on President Trump after flipping several Republican House seats across the U.S. Others noted that Democrats gained fewer seats than Republicans did during Obama's and Clinton's first midterm election cycles, writing that President Trump was victorious in fending off an outpouring of financial support for the Democratic party as well as media bias against him.
And check out some other big stories this week: White House Revokes CNN Reporter Jim Acosta's Press Credentials After Testy Exchange With Trump, Jeff Sessions Resigns as Attorney General, and Fox News, NBC, and Facebook Pull Controversial Trump Immigration Ad.
Snippets from the Center
The winners and losers from the 2018 midterm elections
USA TODAY
"Loser: Liberal Democrats
Before Tuesday, liberal-leaning commentators gushed about three Democratic candidates who appeared to be winning over voters in Southern states with unapologetically liberal platforms: Beto O'Rourke in the Texas Senate race, Andrew Gillum in the Florida governor race and Stacey Abrams in the Georgia governor race... Abrams, Gillum and O'Rourke performed well and made their races tight, but all three appear to have been defeated.
...
Winner: House Democrats
Perhaps the biggest outcome of the election: divided government has returned to Capitol Hill. The winners of more than 20 House races have not yet been projected, but Democrats have already won more than the 218 seats required to gain a majority and they are expected to pad their lead as the remaining races are called.
...
Loser: Donald Trump
With Democrats in control of the House, the barks of opposition that have hounded Trump since he took office will now have some bite.
...
Winner: Donald Trump
He might have lost the House, but the president was celebrating on his Twitter feed Tuesday night and Wednesday morning. That's because of the Republicans' strong performance in several Senate races that polls had painted as Democratic-leaning toss-ups."
Snippets from the Left
The lesson of the midterms: resistance works
Vox
"Republicans picked off Senate seats deep in red America, but in the more responsive House of Representatives, Democrats won seat after seat in urban and suburban America, swept to a majority, and brought an end to the Republican monopoly on power. The lesson is clear: Resistance works.
...
The resistance fought hard to combat Trump’s policy initiatives in Congress. By no means did they win at every turn. Trump scored a meaningful policy legacy, but all of it is unpopular. His image on health care is in tatters, the polling on his tax bill is miserable, and Brett Kavanaugh is the least popular newly confirmed Supreme Court justice on record.
...
The congressional Republican Party stood by Trump through it all. They abandoned their 2016-vintage promises to be independent of Trump and hold him accountable, and Trump betrayed his 2016-vintage promises to be independent and check the GOP’s plutocratic instincts. They decided they would rather hang together than risk hanging separately, and for their sins, they paid at the polls."
Snippets from the Right
Newt Gingrich: The one big thing the liberal media never told you about Trump and the midterms
Fox News Opinion
"The big story coming out of Tuesday’s midterm elections is how totally the news media missed the issue of what waves were building.
There was no red wave. If there had been, Republicans would have kept majority control of the U.S. House and had even more pickups in the Senate.
There was no blue wave. If there had been, Democrats would have gained control of the Senate.
There was an underreported green wave, which attempted to drown Republicans in left-wing money.
And there was the usual anti-Republican liberal media wave, which tried to prop up Democrats.
...
Republicans gained Senate seats to an unprecedented degree, because President Trump personally crisscrossed the county holding massive rallies, which dwarfed the size of former President Obama’s rallies.
...
The president defeated both the money wave and the liberal media – and had a very successful midterm election for a first-term president."
Discover more on this topic on AllSides.
Elections, Midterms, Politics, Story Of The Week, News