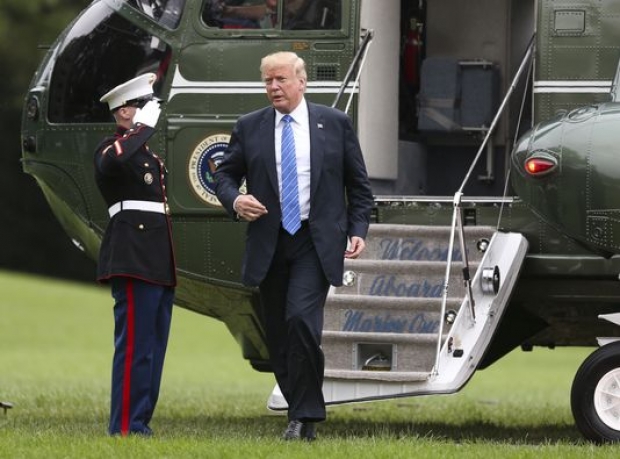 President Trump’s ex-lawyer Michael Cohen recorded a conversation where the two discussed a payment made to a former Playboy model who alleges she had an affair with Trump—an accusation the president had repeatedly denied. Some argue that the tape could be detrimental to the Trump presidency, while others say that it may be insignificant, particularly if the president did not use federal donations.
Check out some other big stories this week: GOP Lawmakers Move To Impeach Deputy Attorney General Rosenstein, Trump Administration to Give Billions in Aid to U.S. Farmers Hurt by Trade War, and Trump Warns Iran To Stop Threats to the US.
And take a look at the new sources we've added. Our data is driven by you, so make sure to weigh in on our media bias ratings.
Snippets from the Center
Trump-Cohen feud: Taped discussion of payoff to Playboy model triggers open warfare
USA Today
"The feud between President Donald Trump and his former personal attorney, Michael Cohen, erupted into open warfare Wednesday with the airing of a taped conversation the two men had in 2016.
The tape intensified scrutiny over efforts to quiet a former Playboy model's allegation that she had an affair with Trump more than a decade ago. It also added to expectations that Cohen is preparing to cooperate with prosecutors examining the business practices of the lawyer, who was long known as Trump's 'fixer.'
...
Those close to Trump believe he has been treated unfairly, and the release of the tape constitutes a violation of attorney-client privilege, said four aides and advisers speaking on condition of anonymity to discuss internal legal matters. Trump recently waived a claim to attorney-client privilege that would have shielded the tapes from prosecutors.
Potentially more troubling for Trump, Davis repeatedly suggested that Cohen is ready to cooperate with prosecutors looking into the matter – a shift that may represent a new phase in the investigation."
Snippets from the Right
Michael Cohen's tape of Trump isn't that big a deal – yet
Washington Examiner
"Everyone is freaking out over a New York Times report that the FBI has secured an audio tape involving President Trump's lawyer, Michael Cohen, and Trump himself. But here's the thing: This audio tape is not the disaster for Trump that some are presenting.
...
According to the Times and Trump lawyer Rudy Giuliani, the tape records Trump and Cohen discussing payment to a woman, Karen McDougal, a model who says she had an affair with the Trump.
Yet unless the recording shows that Trump authorized the payment with federal donations, there would appear to be no laws broken here.
...
There are two caveats, however. First, the audio tape's lends credibility to McDougal's assertion of an affair with the president. That might be a problem for first lady Melania Trump. Second, if Cohen secretly recorded this audiotape, how many others did he record and what do those recordings show?"
Snippets from the Left
Michael Cohen’s Tape Sounds Like He Could Bring Down Trump
The Daily Beast
"The release of a secretly recorded conversation between Michael Cohen and Donald Trump about a proposed secret payment to one of Trump’s supposed mistresses goes a long way towards a potential criminal charge for both men.
...
While there is some debate about whether Trump could be indicted directly or whether impeachment is the sole consequence for his conduct (an issue that almost certainly would need to be resolved by the Supreme Court), his conduct on the tape could support criminal liability for campaign finance violations, bank fraud, wire or mail fraud, and tax evasion. Even if Trump himself did not commit all of these offenses, or even if the crimes never actually occurred, he could be liable for conspiracy because he agreed with others (including Cohen) to commit these acts.
...
If Cohen cooperates, which he has signaled he wants to do, he can guide the prosecutors though every nuance of this tape and countless other pieces of evidence. After working for Trump for over a decade, Cohen could be the prosecutor’s dream cooperator: one who had special insider access to the leader of a powerful, closed, corrupt organization."
Discover more on this topic on AllSides.
Tags:
Politics
Michael Cohen
Donald Trump
Story of the Week
News