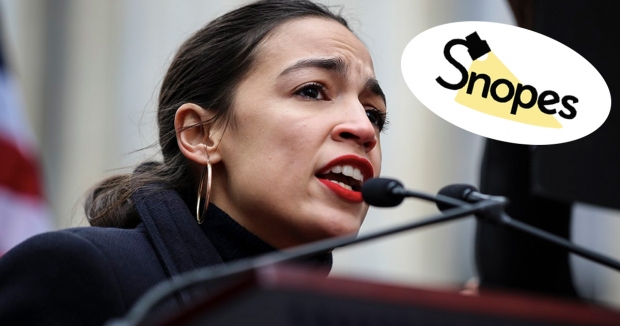 Snopes today offered a clear example of how fact check outlets can be biased when it attempted to “fact check" the opinion that Alexandria Ocasio-Cortez exaggerated the danger she was in during the Capitol Hill storming, which she recently spoke about on Instagram Live.

Opinion statements presented as fact are a very common type of media bias. We recently explained how a Politifact “fact check" was actually a subjective analysis masquerading as objective fact. Today, Snopes is also guilty of “fact checking" subjective statements by AOC critics.

Snopes’ headline reads: “Did AOC Exaggerate the Danger She Was in During Capitol Riot?"

Right off the bat, the headline shows that Snopes is not conducting a fact check. By definition, we can’t fact check a claim that AOC “exaggerated" something, because whether or not she did so is a matter of personal opinion. One person may argue her words were adequate in describing the situation, while another may say she inflated things. Neither person can be proved as right or wrong, because both are offering their subjective interpretation of events. 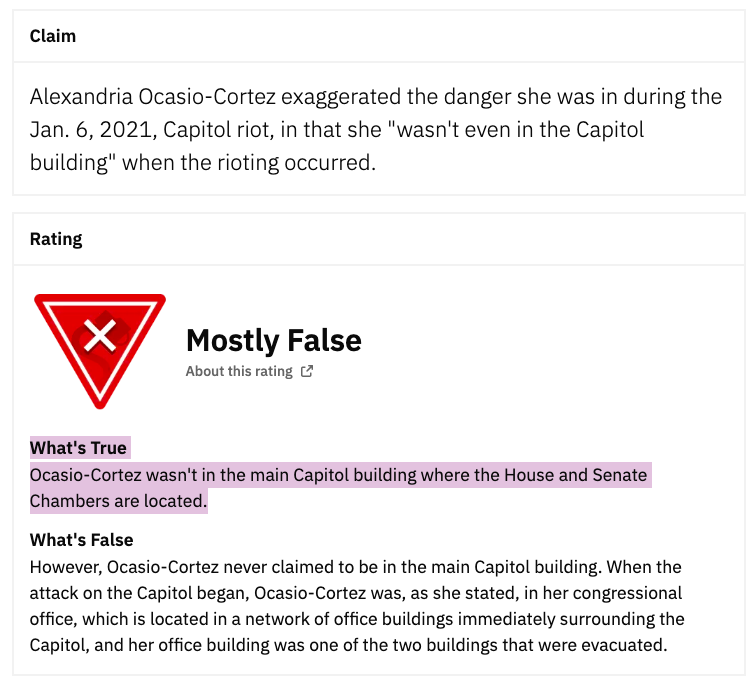 Snopes goes on to lay out the claim: “The Claim: Alexandria Ocasio-Cortez exaggerated the danger she was in during the Jan. 6, 2021, Capitol riot, in that she "wasn't even in the Capitol building" when the rioting occurred."

Snopes rates this claim as “Mostly False," continuing: “What's True: Ocasio-Cortez wasn't in the main Capitol building where the House and Senate Chambers are located."

To many, this is sufficient information to draw the opinion that AOC exaggerated the danger she was in on Jan. 6. To others, like Snopes, it’s not — they think she really was in a lot of danger and was not exaggerating. But neither of those interpretations are things that can be fact checked — they are people’s subjective feelings, opinions, and interpretations. We can factually determine what was going on at the Capitol that day — windows smashed, furniture overturned, people standing around, people praying, people entering a building when they weren’t authorized, etc. — but the level of danger that constitutes is a matter of interpreting what happened.

The facts are simply this: The Capitol was stormed. AOC was not in the main Capitol building during the storming. AOC said she felt traumatized by the events of the day.

Any takeaways that supporters or critics of AOC provide on top of these facts is purely subjective in nature and not able to be analyzed within the realm of fact checking. Snopes blurs the line between subjective opinion and fact checking in this article.

“The online attacks on Ocasio-Cortez downplayed, from a safe distance, not only the sense of fear she felt in the moment during the attack on the Capitol, but also the imminent physical danger that she and others in and around the Capitol really were in during the attack."

An objective fact-check by Snopes may have looked more like this: “Was AOC in the Capitol building when the Jan. 6 riot occurred?" Snopes could then have given the facts of the day — what happened and where AOC was when it occurred — without providing their subjective interpretation of whether or not she exaggerated the danger she was in, or whether or not people ought to have played up or downplayed something.

Understanding the Difference Between Objective Facts and Subjective Claims

Let’s review what objectivity versus subjectivity is, so we can better understand how outlets like Snopes blur that line.

Objective statements or facts are that which is directly observable — things you can see, count, hear, or otherwise observe or prove. Objective facts do not vary, have a viewpoint, or infer value/moral judgements.

Examples of objective statements are:

Alexandria Ocasio-Cortez was in her office in the Cannon Building on Jan. 6 during the Capitol Hill storming.

Alexandria Ocasio-Cortez said, “I’m a survivor of sexual assault. And I haven’t told many people that in my life. But when we go through trauma, trauma compounds on each other."

A large group of unauthorized people entered the Capitol building on Jan. 6. Some smashed windows and overturned furniture.

The stepmother of a former Atlanta police officer was fired from her job.

U.S. traffic has rebounded to about 90 percent of pre-pandemic levels.

The mayor said he expected “crowds in excess of 100,000" near the stadium.

More than 30 healthcare workers in the city have died.

Examples of subjective analysis are:

AOC is exaggerating what happened on Jan. 6 for political purposes and had little reason to feel traumatized.

AOC is justified in the immense fear she felt on Jan. 6 and we should all empathize with her plight.

People were wrong to enter the Capitol building and traumatize lawmakers.

The Capitol Hill storming was a display of feelings of powerlessness at an unjust system.

The World Health Organization is the world’s best hope for fighting pandemics.

Our leaders are cowards when we need them to be brave.

Our justice system is a blight on our nation and makes a mockery of our ideals.

See the difference? One infers judgements and opinions, the other simply states facts.

“The online attacks on Ocasio-Cortez downplayed, from a safe distance, not only the sense of fear she felt in the moment during the attack on the Capitol, but also the imminent physical danger that she and others in and around the Capitol really were in during the attack."

Fact check outlets are often biased — this is why AllSides provides media bias ratings for Politifact, FactCheck.org, and Snopes, and a feed where you can compare fact checks across the spectrum.

One of the main reasons there is so much confusion and bias in the media today is because the line between objectivity and subjectivity is often blurred. When subjective statements are presented as fact, we are less able to understand the world. Comparing headlines and reading perspectives across the political spectrum can help us begin to see how media bias works to distort our view.