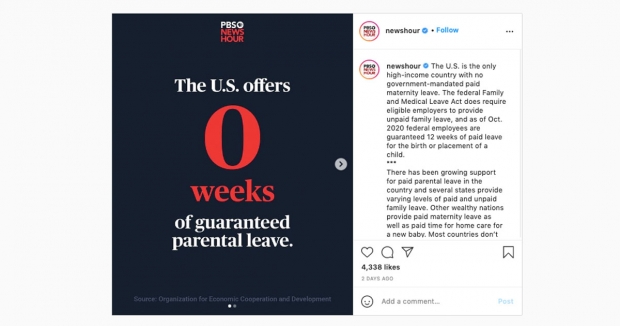 The post includes a graphic that reads, “The US offers 0 weeks of guaranteed parental leave.” The next slide compares “government-guaranteed paid leave for birthing parents” in the US to the UK, Canada, Japan, and Estonia. The bar graph shows the US paling in comparison to these nations, each of which offer progressively higher rates of nationally mandated leave than the U.S.

The first slide is a bit misleading, as the U.S. does offer mandated leave for eligible employers — it just doesn't federally mandate paid leave. PBS points out in its caption that the federal Family and Medical Leave Act does require eligible employers to provide unpaid family leave, but it doesn’t give the full details. The specifics of the federal law are that 12 weeks of unpaid leave is required annually for mothers of newborn or newly adopted children if they work for a company with 50 or more employees. PBS also mentions that “several states provide varying levels of paid and unpaid family leave,” but doesn’t mention specifically that some states go further than federal law and require more leave for employees. Some states extend FMLA laws to smaller companies, while others guarantee paid leave.

A state-by-state breakdown, or mention of differing state laws, would have provided a clearer understanding of the reality for most people across the U.S. In addition, PBS could have given statistics on how many U.S. employers offer paid leave for both parents (less than half — 40% as of late 2018, according to Mercer).

It is a matter of opinion as to whether or not these federal and state laws (or employer offerings) are generous enough, or sufficient at all. It could absolutely be argued that they aren’t, and that a nation should mandate paid time off for mothers. But instead of giving you all the facts and letting you decide for yourself, PBS Newshour’s post seems to be tilted toward giving the perception that the U.S. is insufficient/trailing behind the rest of the developed world in maternity paid leave requirements. Perhaps it is, but again, this is a matter of opinion — and we need all the facts in order to better form our positions.

If PBS wanted to highlight the growing support for federally mandated paid maternity leave, they could have started with the facts of the present state of maternity leave in the U.S, then presented polling data on public opinion, interviews with advocates, and/or explored new bills in Congress supporting such measures.

PBS also states: “There has been growing support for paid parental leave in the country and several states provide varying levels of paid and unpaid family leave. Other wealthy nations provide paid maternity leave as well as paid time for home care for a new baby.” It is true that there has been growing support for paid parental leave in the U.S., with some arguing that generous paid leave allows parents to bond with a newborn, increases rates and duration of breastfeeding, lowers rates of postpartum depression, and ensures greater involvement from fathers later in life. PBS doesn’t mention, though, that some people push back against calls for federally mandated paid parental leave — some arguments given are that it would make it more expensive to hire women and that most women already have access to paid leave. Others argue the entire debate misses the real root issue, which is that most families feel they need to have two incomes, instead of one parent being able to stay home to raise children full-time. They argue federally mandated paid leave wouldn't be necessary if parents could survive on one income.

Journalists are supposed to give the full story and let you decide for yourself — not withhold or omit information in order to convince you of a certain view. At the same time, there will always be limits. Instagram is a limited medium, where journalists are challenged to fit a lot of information into a photo and caption. Still, it’s important to be aware of and point out bias by omission so that we can critically analyze the content we see on social media.