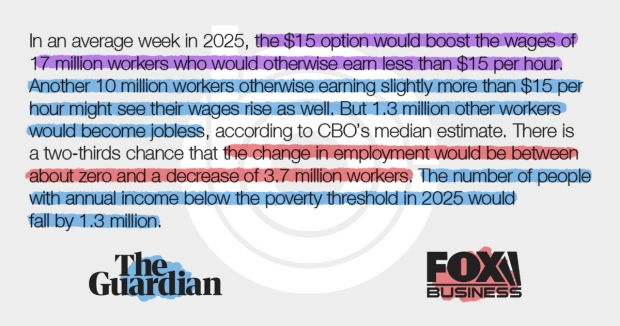 “There are three kinds of lies: lies, damned lies, and statistics.” -Mark Twain

On Tuesday, Democrats in Congress reintroduced a bill to gradually raise the minimum wage to $15 per hour by 2025. Slanted coverage soon followed.


While most coverage of the bill came initially from center-rated and business-focused outlets, the Guardian (Lean Left) and Fox Business (a section of Fox News, Lean Right) were among the few more partisan outlets to take a swing at the story. In doing so, they each demonstrated slant and media bias by omission by selectively using Congressional Budget Office (CBO) predictions to portray the minimum wage as an overall benefit or detractor from the economy.

The articles in question, written by Steven Greenhouse (the Guardian) and Megan Henney (Fox Business), each cite the CBO’s 2019 report entitled “The Effects on Employment and Family Income of Increasing the Federal Minimum Wage,” presumably to inform their readers of the economic data surrounding Democrats’ controversial proposal.

This is commendable — journalism benefits from the apt application of science and data, and these reporters were right to try to provide context for their story. However, the inclusion of some data doesn’t always paint the full picture — a key marker of slant.

For instance, here is the Guardian’s explanation of the CBO’s predictions:

...and here is Fox Business’ explanation:

“A recent analysis published by the Congressional Budget Office, a nonpartisan agency, found that as many as 3.7 million workers could lose their jobs as a result of the minimum wage increase. At the same time, the CBO projects that some 17 million workers would receive a pay boost.”

Clearly, the writers of these articles didn’t get the same thing out of the report.

In the Guardian’s version, the minimum wage will increase 27 million workers’ pay and pull just as many people out of poverty as it makes jobless. In Fox Business’ version, the minimum wage will put millions out of work while offering only 17 million a pay raise. Based on this divide, it’s easy to see how readers of each outlet might come away with a very different understanding of the economic data surrounding this issue.

“In an average week in 2025, the $15 option would boost the wages of 17 million workers who would otherwise earn less than $15 per hour. Another 10 million workers otherwise earning slightly more than $15 per hour might see their wages rise as well. But 1.3 million other workers would become jobless, according to CBO’s median estimate. There is a two-thirds chance that the change in employment would be between about zero and a decrease of 3.7 million workers. The number of people with annual income below the poverty threshold in 2025 would fall by 1.3 million.”

Upon reading the source document, it becomes clear that these reporters cherry-picked certain data points and left out others.

Henney (Fox Business), on the other hand, just used the 17 million figure for “workers [who] would receive a pay boost.” In the case of pay raises, Fox Business’ reporting left out 10 million people earning slightly more than $15 who might get a raise as well.

The slant didn’t stop there. Greenhouse (the Guardian) cites the 1.3 million median job loss figure and the 1.3 million fewer people making poverty wages, but not the 0 to 3.7 million predicted range of employment losses. Henney (Fox Business), meanwhile, only cites the “as many as 3.7 million” figure.

These articles give two separate impressions of what nonpartisan, official economic predictions say about the minimum wage. That’s not how news reporting is supposed to work.

It’s also notable that these statistics are both cited from the second paragraph of the “At a Glance” section of the CBO report. This isn’t necessarily a bad thing, but may highlight the cost of the 24-hour news cycle. The busier and more pressed-for-time reporters are, the less detailed their reports will be. Politically-charged media bias is always a suspect, but it’s entirely possible that the cherry-picking demonstrated in these two articles happened because authors could only fit a limited number of data points.

Examples of bias like this one show why it’s important to get your news from multiple sources, to ask questions, and to track down original source material instead of relying on paraphrasing. Follow us on social media and download the AllSides app to keep your news feed balanced!

This article was written by AllSides.com’s Daily News Specialist Joseph Ratliff. He has a Lean Left bias. It was reviewed by Managing Editor Henry A. Brechter (Center bias) and Director of Marketing Julie Mastrine (Lean Right bias).