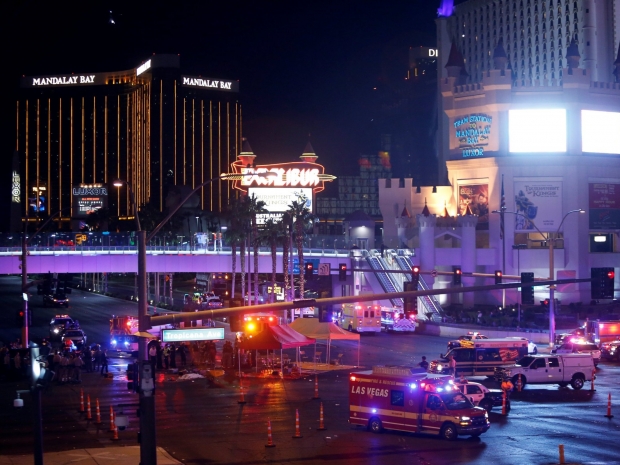 The largest mass shooting in modern American history took place on Sunday night in Las Vegas. The gunman shot from his Mandalay Bay hotel room into a crowd of 20,000 at an outdoor concert, killing 59 and injuring over 500 people. It is still unclear at this time what his motives were, but the events have reignited the gun control debate.
Other news from AllSides:
Snippets from the Left
This Is Precisely The Right Time To Talk About Guns
Huffington Post
"Why does any American require an automatic assault rifle? There is no room for debate about this. There is only one answer. There is no sane reason for any private American citizen to own an automatic assault rifle.
It is precisely the right time to talk about guns. Just as it was time after Columbine, Sandy Hook and Orlando. Of course under this administration and with a majority Republican Congress, the conversation will be silenced before it ever really gets started. But we must demand that the conversation go forward. We should be taking to the streets as we did to stop the health care overhaul. This is about the health and welfare of all of us, especially our children.
Do you want to live in a country where you must worry about your child or your mother or your friend attending a concert? Do you want to live in a country where you must worry about your child or your mother or your friend going to church? Do you want to live in a country where you must worry about your six-year-old going to school?"
Snippets from the Right
Let’s Wait for the Facts, and Get Them Right
National Review
"Regarding Las Vegas, we know very little about the shooter’s motivations, the gun he used in his massacre, and how he acquired said gun, but that hasn’t stopped Hillary Clinton from plowing forward with gun-control talking points. For example: ...'The crowd fled at the sound of gunshots. Imagine the deaths if the shooter had a silencer, which the NRA wants to make easier to get.' I have no idea what difference that would have made, and neither does Hillary Clinton. And she’s relying on a misconception of what a “silencer” does.
...
When the facts come in, we absolutely need to discuss what happened and how it could have been prevented. But until then, let’s grieve and process the staggering loss of life we just witnessed instead of “imagining” what might happen if Hillary Clinton’s political adversaries in the current Congress have their way.
...
There may be lessons for gun policy when all is said and done here. But can’t we hold off on advancing our political agendas until then?"
Snippets from the Center
This timeline shows exactly how the Las Vegas massacre unfolded
Business Insider
"The deadliest shooting in recent US history unfolded — as most do — in a storm of chaos and confusion.
Though the enormity of the situation emerged quickly Sunday night, details were still emerging of exactly what happened more than 48 hours later.
The police have confirmed that the gunman, 64-year-old Stephen Paddock, spent three days in Las Vegas before his attack and managed to amass a huge stockpile of guns.
By the time the general public knew a shooting was underway, Paddock was already dead."
Discover more on this topic on AllSides.
News, Story Of The Week, Las Vegas Shooting, Gun Control, Gun Legislation