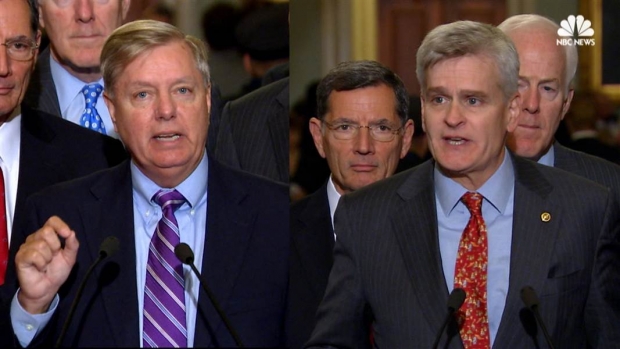 The Graham-Cassidy bill is seen as the last chance Republicans have of repealing and replacing Obamacare. After September ends, the Senate will need 60 votes to pass any healthcare legislation (currently they only need 50, plus a tiebreaker by VP Pence). There are 4 hold-out votes - Sen. Rand Paul (Ky.), Lisa Murkowski (Alaska), Susan Collins (Maine), and John McCain (Ariz.) - but they may vote "yes" if certain concessions are made.
Other news from AllSides:
Snippets from the Right
The Graham-Cassidy Conundrum
National Review
"The public narrative has been that when the leadership gave up, Senators Bill Cassidy and Lindsey Graham kept pushing, putting together their own legislation and a coalition to go with it. But in practice, this means McConnell stepped aside and let other Senate Republicans do the legwork - a way of pursuing secret consensus-building more effectively. Effectively, he doubled down on pursuing Obamacare repeal in secret, and he did so by coordinating a leadership quarantine from the effort until now.
...
Ultimately, this is a traditional compromise bill that gives no one what they truly want. Conservatives charge it with keeping Obamacare’s infrastructure intact; faced with the prospect of Berniecare, centrists hold up Obamacare as the genuine middle-position alternative and see Graham-Cassidy as too reactionary; Democrats, for their part, universally oppose any adjustment of Obamacare in a rightward direction."
Obama spreads untruths about the Graham-Cassidy health bill
Washington Examiner
"This is vintage self-righteousness from the former commander in chief, he cannot see how Republican legislation might be better than his own. But it would be better.
First off, the Graham-Cassidy bill restores some semblance of fiscal sanity to Medicaid. That entitlement program exploded under the Obama administration, as the government shifted millions of Americans onto its rolls, but failed to address its grevious inefficiencies. By transferring federal Medicaid grants to state governors, and allowing them to use that money as they see fit, Graham-Cassidy will promote Medicaid innovation and reform. It will also help to address the growing debt crisis that threatens, as Obama might say, to inflict real human suffering."
Snippets from the Center
The one major reason Graham-Cassidy could pass
CNN
"When it comes to the Graham-Cassidy health care bill, there is one thing Republicans agree on right now: It's their last shot to repeal and replace Obamacare.
That may be all the motivation they need to pass it.
...
And in large part, it's because time is running out. According to the chamber's parliamentarian, senators only have until the end of the month to pass a bill with just 51 votes under the procedure known as reconciliation, and the Senate's last-ditch exercise isn't all that different than the one that ultimately resulted in a health care bill being passed in the House."
Snippets from the Left
How many more people would lack coverage under Cassidy-Graham? We can guess.
Washington Post
"It’s safe to say the new Obamacare rollback measure toward which the Senate is charging would mean fewer Americans have health coverage. Exactly how many is unclear. Some argue it could be more than 22 million people. Others told me it could be fewer.
...
Republicans won’t have to combat a similar number if they vote on the Cassidy-Graham bill next week, which Senate Majority Leader Mitch McConnell (R-Ky.) has announced he intends to bring to the floor. That’s because the Congressional Budget Office ― the official scorekeeper for the legislative branch ― says it will release only a partial analysis by then. It will take several more weeks to estimate the bill’s costs and how many more people may be uninsured than under Obamacare."
Discover more on this topic on AllSides.
Story Of The Week, Obamacare, Obamacare Repeal, Senate, Republican Party, News