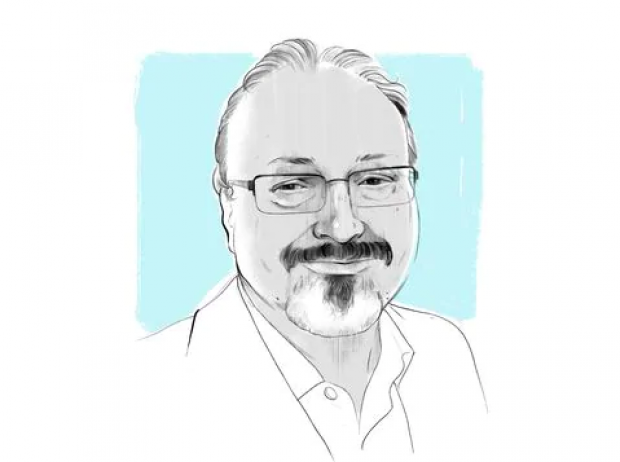 Journalist Jamal Khashoggi, a Washington Post columnist and longtime critic of the regime in Saudi Arabia, was allegedly murdered at the Saudi consulate on October 2, sparking global outrage over human rights abuses at the hands of Crown Prince Mohammed bin Salman.
While Saudi Arabia has been condemned by media outlets across the aisle, some have been particularly critical of President Trump's friendly relationship with the Saudi monarchy, with many arguing that he has failed to take swift action in the face of undeniable evidence. Others have focused on foreign relations with the Saudi Kingdom in general, suggesting that the U.S. should reconsider its relationship with the country.
The AllSides Google News Bias Report was featured in USA TODAY!
And check out some other big stories this week: Federal Deficit Rises to $779 Billion, Highest Since 2012, Canada Legalizes Recreational Marijuana, and President Trump Gives Interview on '60 Minutes,' Talks Climate Change, Foreign Relations, and Defense Secretary Mattis.
From Jamal Khashoggi
What the Arab world needs most is free expression
Washington Post
"I was recently online looking at the 2018 “Freedom in the World” report published by Freedom House and came to a grave realization. There is only one country in the Arab world that has been classified as “free.” That nation is Tunisia. Jordan, Morocco and Kuwait come second, with a classification of “partly free.” The rest of the countries in the Arab world are classified as “not free.”
As a result, Arabs living in these countries are either uninformed or misinformed. They are unable to adequately address, much less publicly discuss, matters that affect the region and their day-to-day lives. A state-run narrative dominates the public psyche, and while many do not believe it, a large majority of the population falls victim to this false narrative. Sadly, this situation is unlikely to change.
...
As a result, Arab governments have been given free rein to continue silencing the media at an increasing rate. There was a time when journalists believed the Internet would liberate information from the censorship and control associated with print media. But these governments, whose very existence relies on the control of information, have aggressively blocked the Internet. They have also arrested local reporters and pressured advertisers to harm the revenue of specific publications.
...
The Arab world needs a modern version of the old transnational media so citizens can be informed about global events. More important, we need to provide a platform for Arab voices. We suffer from poverty, mismanagement and poor education. Through the creation of an independent international forum, isolated from the influence of nationalist governments spreading hate through propaganda, ordinary people in the Arab world would be able to address the structural problems their societies face."
Snippets from the Left
The Saudi Cover-Up Crumbles
The New York Times Editorial Board
"Despite nearly incontrovertible evidence — including grisly audio recordings described by Turkish officials of Mr. Khashoggi’s torture, murder and dismemberment — Mr. Trump insists he does not know what happened inside the Saudi consulate in Istanbul on Oct. 2 or who might have ordered it. And yet Mr. Trump almost certainly does know, if not from reading the newspapers then from the multiple intelligence agencies that report to him.
It stretches the imagination that Turkey has not shared these recordings with American intelligence agencies, and that they, in turn, would not have shared them with the president and Mr. Pompeo, a former director of the C.I.A. who discussed the killing with the Turkish president on Wednesday. Mr. Trump denied knowledge of any recordings (“if they exist,” he said Wednesday); Mr. Pompeo declined to comment.
...
If Saudi Arabia is allowed to get away with some lame story about the apparent murder of Mr. Khashoggi, the world’s growing gang of autocrats will feel even less constraint. There are plenty of measures at Mr. Trump’s disposal that would send the right message, from personal sanctions against those behind the Khashoggi operation to a suspension of arms deliveries to Saudi Arabia. Mr. Trump’s aides, members of Congress and allied leaders need to insist that he take the lead in demanding that Saudi Arabia acknowledge what really happened, and why it’s terribly wrong."
Snippets from the Right
It's time to rethink America's relationship with Saudi Arabia -- It is not our friend
Sen. Rand Paul (R-KY) for Fox News Opinion
"It is time to use our leverage to force change in the Kingdom of Saudi Arabia. We can start by cutting off our military aid and weapons sales to the kingdom.
The killing of Saudi dissident journalist Jamal Khashoggi is many things, including brutal and terrifying to those who report on the Saudis. What it also should be, in light of what it exposes about the Saudi regime, is a turning point in our relationship, where we as Americans stop and ask ourselves what we have been propping up and supporting.
...
There is ample evidence of mass incarceration, indefinite detention, torture, and a complete lack of the rule of law and due process within Saudi Arabia. As a matter of understatement, this is antithetical to American ideals.
...
What we have here is leverage. The Saudis need our help and weapons. And we should make sure that this need causes a change in their behavior.
It isn’t enough to talk tough and then give the Saudis what they want. We have to force their hand into real reforms, internally and abroad.
With the outrage caused by their recent actions, now is the time for bipartisan corrective action."
Discover more on this topic on AllSides.
Middle East, Jamal Khashoggi, Saudi Arabia, Free Speech, Story of the Week, News