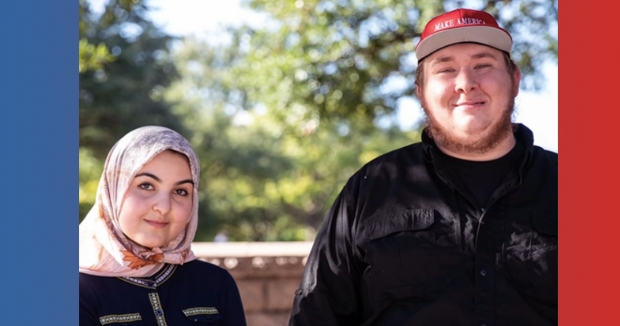 Amina Amdeen is a Muslim who wears a hijab. She’s been in situations where people have tried to remove her hijab from her head. So when she saw a group of protestors trying to light conservative Joseph Weidknecht on fire and snatch a Make America Great Again (MAGA) hat from his head, she took swift action to defend him.

The event took place at a march protesting the election of Donald Trump in Austin, Texas, in 2016. The two somewhat unlikely friends tell their tale on StoryCorps, a nonprofit organization that records conversations between two participants, often with the theme of bridging political divides.

“I don’t think we could be any further apart as people, and yet it was just kinda like this common, 'That’s not okay,’ moment,” Weidknecht said.

These days, it's not uncommon to hear someone has lost friends over politics. Weidknecht says the election cost him many friends due to his beliefs. Amdeen and Weidknecht's story is one America needs to hear, but rarely surfaces in modern media: Americans with very different political beliefs not only acting civil toward one another, but actually becoming friends.

StoryCorps is a nonprofit that invites two people who know each other to participate in recorded interviews. This interview was recorded as part of its One Small Step project, which "encourage[s] people to engage in conversations with someone they might not agree with politically." AllSides rates StoryCorps as a Mixed media bias, meaning it aggregates content from all sides of the political spectrum.

Listen to Amdeen and Weidknecht’s story in their own words below.