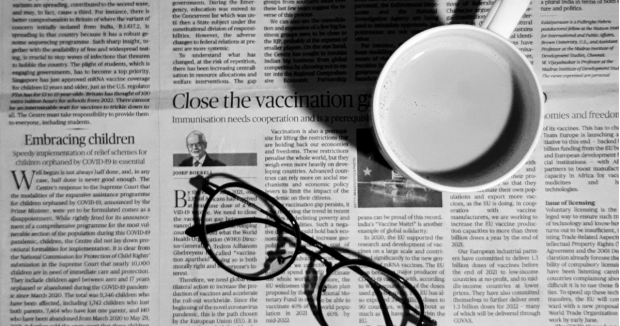 This piece originally appeared on The Conversation, which AllSides rates as Lean Left. It was written by Michael J. Socolow, an Associate Professor of Communication and Journalism at the University of Maine. The writer's bias has not been rated.

It began with a basic “news you can use” feature from National Public Radio. Titled “5 ways to cope with the stressful news cycle,” producer Andee Tagle’s piece, published in late February, offered tips on how to cope with anxiety caused by news consumption in tense times.

Among Tagle’s tips: “Do something that feels good for your body and helps you get out of your head.” Also: “The kitchen is a safe space for a lot of us. Maybe this is the weekend that you finally re-create Grandpa’s famous lasagna … or maybe just lose yourself in some kitchen organization.”

National Review’s Dan McLaughlin tweeted that the piece indicated that NPR employees “really do not envision their audience as grown adults.”

The piece and its condemnation raise issues involving research about the mental and psychological toll of everyday news consumption that’s gone largely unnoticed by the public over the last few years. Recent surveys and research on the subject have only occasionally been publicized in the general press. The COVID-19 global pandemic – and the doomsday news reports it sparked - attracted a bit more attention to this research.

Yet the mental and psychological toll of news consumption remains largely unknown to the general news consumer. Even if the research isn’t widely known, the emotions felt by what one Northwestern University Medical School article called “headline stress disorder” probably exist for an certain unknown proportion of news consumers. After all, if these feelings didn’t exist for at least some of their listening audience, NPR would never have published that piece. Nor would Fox News have published a similar article to help its viewers cope.

The idea that more news, delivered faster through new and addicting technologies, can cause psychological and medical harm has a long history in the United States.

Media scholars like Daniel Czitrom and Jeffrey Sconce have noted how contemporaneous research linked the emergence and prevalence of neurasthenia to the rapid proliferation of telegraphic news in the late 19th century. Neurasthenia is defined by Merriam-Webster as “a condition that is characterized especially by physical and mental exhaustion usually with accompanying symptoms (such as headache and irritability).” Early 19th-century scientific exploration in neurology and psychiatry suggested that too much news consumption might lead to “nervous exhaustion” and other maladies.

In my own research into social psychology and radio listening, I noticed the same medical descriptions recurring in the 1920s, once radio became widespread. News reports chronicled how radio listening and radio news consumption seemed to threaten some people’s mental stability.

One front-page New York Times article in 1923 noted that a woman in Minnesota was divorcing her husband on the then-novel grounds that he suffered from “radio mania.” The wife felt her husband “paid more attention to his radio apparatus than to her or their home,” which had apparently “alienated his affection” from her.

Similar reports of addiction, mania and psychological entanglement spawned by new media emerged again as television proliferated in the American home in the 1950s, and again with the proliferation of the internet.

The public discussion of psychological addiction and mental harm caused by new technologies, and the ensuing moral panics they spawn, appears periodically as new communication technologies emerge. But, historically, adjustment and integration of new media occurs over time, and disorders such as neurasthenia and “radio mania” are largely forgotten.

“Headline stress disorder” might sound ridiculous to some, but research does show that reading the news can make certain subsets of news consumers develop measurable emotional effects.

There are numerous studies looking into this phenomenon. In general, they find some people, under certain conditions, can be vulnerable to potentially harmful and diagnosable levels of anxiety if exposed to certain types of news reports.

The problem for researchers is isolating the exact subset of news consumers this happens to, and describing precisely the effect that occurs in response to specific identified news subjects and methods of news consumption.

It is not only probable, but even likely, that many people are made more anxious by the widespread distribution of frightening news. And if a news consumer has a diagnosed anxiety disorder, depression, or other identified mental health challenge, the likelihood that obviously distressing news reports would amplify and inflame such underlying issues seems almost certain.

We all eat; but some of us eat far too much. When that occurs, everyday behavior is transformed into actions that can threaten health and survival. Likewise, most of us strive to stay informed, but it’s likely that in certain situations, for certain people, staying informed when the news is particularly frightening can threaten their mental health.

Therefore, the question is not whether the problem is real, but how research might quantify and describe its true prevalence, and how to address the problem.

And that’s precisely why the NPR article caused such a stir. Many people who consume news without problem couldn’t fathom why others might benefit from learning how to cope with “headline stress disorder.”

In reality, the criticism aimed at NPR says nothing about those who find our current run of bad news particularly anxiety provoking. It does say a lot about the lack of empathy from those who would scoff at the idea.