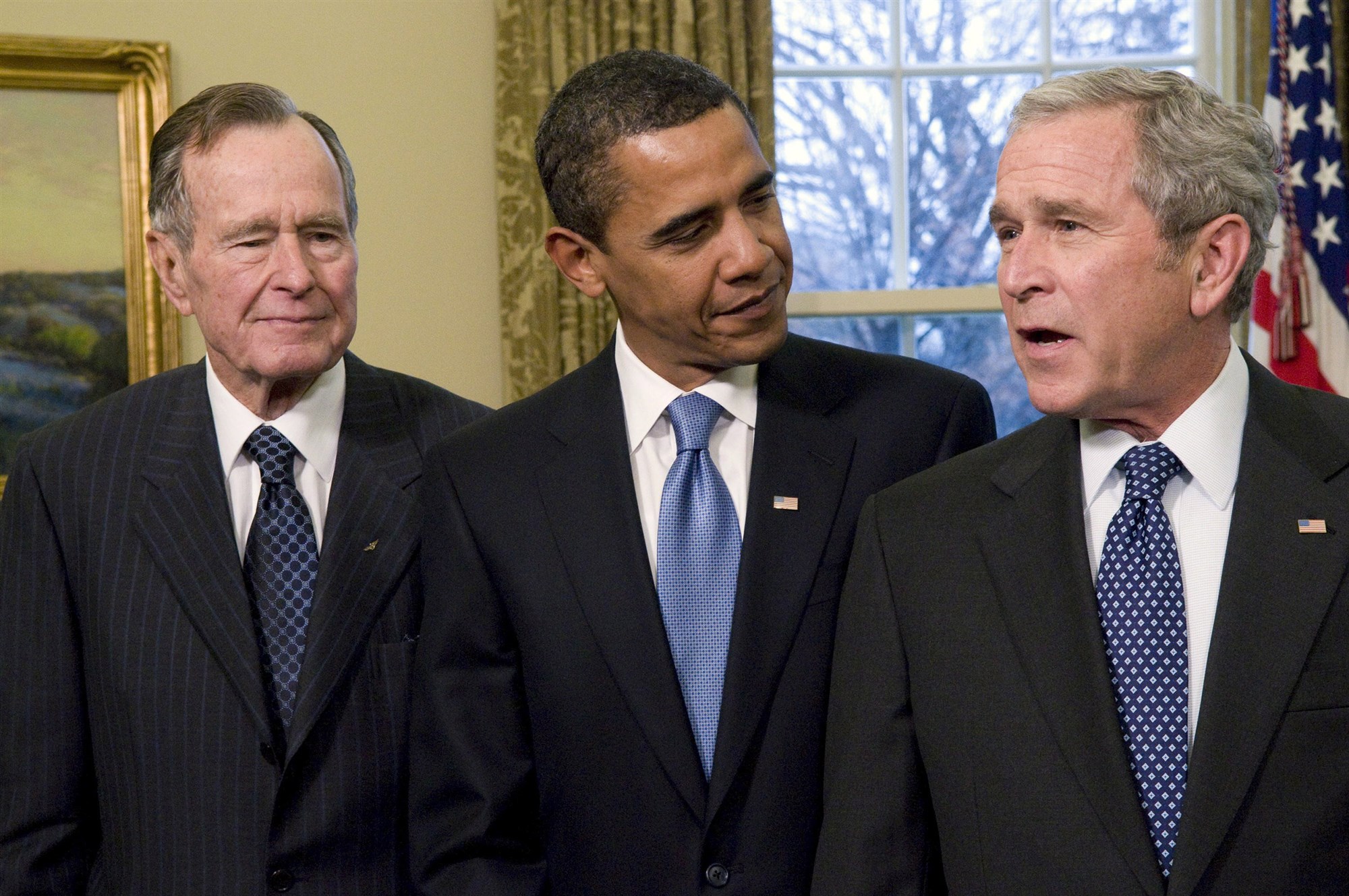 George H. W. Bush, the 41st president of the United States, died on Friday evening.
Tributes have lauded his public devotion to his family and his accomplishments as a leader, such as signing the Americans with Disabilities Act into law and his success in helping end the Cold War. Critics have mainly taken issue with his racial politics and his response to the AIDS crisis. Many praised the former president for his commitment to civility and respectful debate with his political adversaries.
Mismatch was featured on the front page of the San Francisco Chronicle! A part of AllSides for Schools, the program matches you with your political opposite for a respectful one-on-one conversation about the hot-button issues of the day. Learn more.
Check out some other big stories this week: Trump Signs New Trade Pact With Mexico and Canada, Trump Says He Will Formally Cancel NAFTA, Putting Pressure on Congress to Pass New Deal, and US and China Agree to Suspend New Trade Tariffs.
Snippets from the Left
The long fallout of President George H.W. Bush's complicated racial legacy
NBC News
"Bush’s tough-on-crime stance in his 1988 presidential campaign, including in his speeches and an ad from an outside group about a black criminal named Willie Horton, has been cited by many historians of racial politics and even some Republicans as helping to drive decades of politics low on justice or equity.
...
On the campaign trail, he frequently brought up Horton and the specter of uncontrolled violent crime. He made references that [Lee] Atwater had intentionally crafted to sow fear of black Americans while not sounding overtly racist to white voters.
...
He lauded volunteerism and what he regarded as decency. He criticized people with HIV and AIDS but signed bills passed by a Democratic-controlled Congress that created critical funding for their health care. Bush signed the Americans With Disabilities Act, which transformed much of America into a place more accessible for the disabled. He elevated Colin Powell, then a four-star general and a firm supporter of diversity and inclusion efforts but conservative on matters of war, as chairman of the Joint Chiefs of Staff.
...
'I have seen many Republicans who came up in the Reagan and Bush era who say: ‘Oh my God. Trump’s party is not my party. Oh my god, Trump,'' [Leah] Wright Rigueur said. 'But Trump is a symptom of what has been going on for a long time. Trump is a byproduct of the idea that we can toe the line and subtly cross it, feed the beast and somehow not be connected to it.'"
Snippets from the Center
GOP laments Bush’s death as end of ‘a culture of civility’
Associated Press
"One of Bush’s former senior aides, Ron Kaufman, now a Republican national committeeman from Massachusetts, said Bush’s death marked 'the end of a culture — a culture of civility.'
Above all, Kaufman and other Republican leaders — many Trump supporters — lamented the partisan divide that dominates modern politics in America, made even starker when compared to the style and substance of Bush.
'The Bush family raised the level of public decency in American politics,' former South Carolina GOP Chairman Matt Moore said. 'They’re just kind and generous. We need more of that, frankly, in American politics.'
...
'Even though in some respects the political direction of the country is off in another direction, we’ll never forget George H.W. Bush and the contributions he made,' said Bruce Ash, a Republican national committeeman from Arizona. 'It wasn’t just his patriotism, and it wasn’t just his service. It was his decency.'"
Snippets from the Right
With George H.W. Bush's passing comes belated appreciation for his tenure
Fox News
"The late former President George H.W. Bush became the synonym of a decent and well-meaning leader following his retirement from frontline politics, with many belatedly appreciating his four-year presidency that provided much-needed stability in a turbulent world at the time.
...
Bush’s presidency lasted just one term, with some attributing that to his failure to communicate a vision of America and its place in the post-Cold War world. He himself admitted that he struggled with 'the vision thing' and was mortified by the breaking of a pledge not to introduce new taxes.
...
Bush presided during the disintegration of the Soviet Union, which had been the nemesis of America for decades. Yet the communist empire fell apart without the violence that normally accompanies such occurrences.
...
His administration’s decision to build an international military coalition, which included some Arab states as well, to push Iraq out of Kuwait in 1990 has also become a textbook example of restrained American foreign policy, which avoids getting into long-lasting military conflicts."
Discover more on this topic on AllSides.
Tags:
Politics
George H. W. Bush
Story of the Week
News