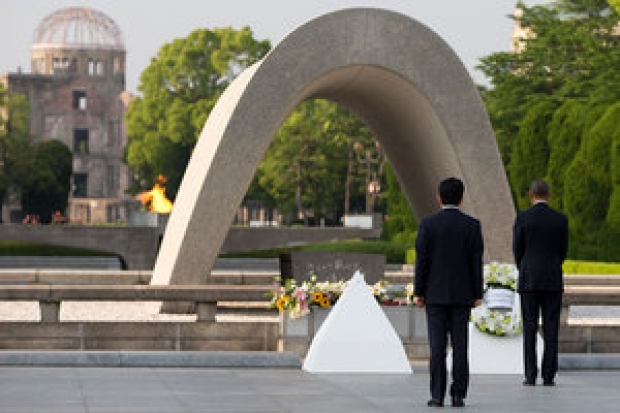 The danger of nuclear weapons may not be a fun thing to talk about, but it is critical to our future. Let's start talking about it.

Our good friend, Joan Blades, agrees, and she is starting the conversation in living rooms across the country. She invited John Gable, our founder, to participate in one of these conversations. Check out this article she wrote for the Christian Science Monitor about it ...

The generation that first built and deployed nuclear weapons has left us with the enormous responsibility of keeping humanity safe from their unparalleled destructive force. No matter who wins the elections in November, it is up to all of us to reduce this terrible threat.

Inspired by President Obama’s recent words in Hiroshima about a world without nuclear threats, I reached across party lines to co-host a Living Room Conversation – a self-facilitated, six person dialogue between individuals with diverse viewpoints – with my friend John Gable, a Republican who worked for Mitch McConnell and both Bush presidencies, also the co-founder of AllSides. We all wanted to better understand the opportunities and obstacles to achieving a world without nuclear threats.

It’s been more than 70 years since the United States dropped the atomic bomb on Japan, and while steep reductions have been made since the height of the Cold War, there are still 15,000 nuclear weapons on the planet – most of which are much more powerful than the bombs that devastated Hiroshima and Nagasaki. The primary question we all sought to answer is: How do we want the next 70 years to unfold, and what can we do to achieve that vision?

We were a diverse group: four women and two men, three Republicans and three Democrats, racially and culturally mixed, with ages ranging from 19 to 71. The core value of this kind of conversation is really hearing people we don’t typically talk to, perhaps even discovering common ground and building relationships.

Our conversation revealed that we are all concerned about current US plans to “modernize” our aging nuclear weapons and delivery systems – viewed by some as building a whole new arsenal. Mr. Obama has set in motion plans to spend by some estimates between $700 billion and $1 trillion dollars during the next three decades on this endeavor.

Is this the way to go about building a world without nuclear threats? We have inherited a Mexican standoff that has become ever more complicated with non-state actors and more countries gaining – or aspiring to gain – nuclear capacity. Does it still make sense for nations to have nuclear weapons on high alert when the cold war ended years ago? Are the dynamics that allowed nuclear deterrence to succeed thus far still sufficient? How do we reduce the risks of nuclear weapons being used worldwide? Many of us are unnerved by our history of near misses.

Nobody had the answer to these tough questions. But we all agreed that safe storage of nuclear materials and weapons, as well as ensuring that mistakes are not made with nuclear weapons, is a key priority. And $1 trillion is a huge investment. We’d like to review plans for how that money would be used. We agree that the post-cold war world has created new challenges to keeping the world safe. While the solutions to these challenges and others are not clear, we believe that stepping up to navigate a path to the secure future we all desire is crucial.

Research shows that leveraging the "wisdom of crowds" – the combined ideas and experiences of experts and citizens – tends to lead to better decisions. Experts alone can be limited by their own biases and groupthink. At this time, citizen voices are not at the table as nuclear weapons modernization plans take shape. In fact, most people under 40 don’t even have nuclear weapons on their list of concerns. How do we include more voices at the table?

And collaborative rather than adversarial relationships lead to better problem solving. Building understanding and trust is a first step on the path to the future we all want. Failing to pass a budget will not end of the world as we now know it. Failing to manage our nuclear weapons just might.

We fundamentally agree on the future we would like to see. We all love our children. We all want our communities to prosper. This world is an astonishing and beautiful place. It is our privilege and responsibility to protect it.

But how can the US be a trusted world leader in a country where our citizens are increasingly polarized and leadership can careen from left to right and back again?

To be sure, a single conversation is not going to solve the threat of nuclear catastrophe. But it can begin to build relationships that may prove invaluable when differences are significant.

It is our responsibility to find a path to a safer world. We must take advantage of the best ideas of experts and citizens alike. And critically, we must build relationships, deepen trust and recognize our shared core values while holding our differences as a strength rather than an obstacle. It is time for our country’s leaders to work together as well – no matter how elections turn out – to ensure a safer future for generations to come.