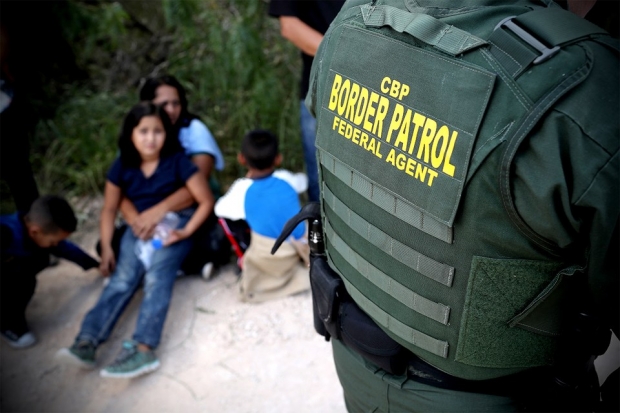 The Trump administration's new "zero tolerance" policy at the border sparked outrage this past week, particularly in light of reports that children were being separated from their parents.
Some on the Right point to the fact that former President Obama carried out the same tactic, although it is acknowledged that his administration did so to a lesser degree. Certain factions have also expressed general support for President Trump's crackdown on illegal immigration, but the administration has received blowback on the family separation issue from high-profile conservative figures, including former First Lady Laura Bush, as well as current First Lady Melania Trump. Many on the Left have accused the president and Attorney General Jeff Sessions of creating a human rights crisis.
The president on Wednesday signed an executive order prohibiting the family separation practice, but still vowed to enforce strict border security.
Check out some other big stories this week: Trump Administration Announces Withdrawal From United Nations Human Rights Council, Supreme Court Sidesteps Decision on Gerrymandering, and President Trump to Create 'Space Force' as Sixth Military Branch.
And take a look at our most recent fact check article about the state of the economy.
Snippets from the Right
Obama Rips Trump on Family Separation but Ignores His Own Record
The Daily Caller
"Trump’s policy of criminally prosecuting illegal immigrants at the U.S.-Mexico border results in the separation of families because of a court settlement in 1997. Families must be separated because of the court settlement, which does not allow children to be held in adult prisons.
Obama himself separated many families at the U.S.-Mexico border, though he prosecuted illegal immigrants at a much lower rate. Department of Homeland Security data shared with The Daily Caller earlier shows his administration prosecuted nearly 500,000 illegal immigrants between 2010 and 2016.
Department of Health and Human services data similarly shows that nearly 200,000 children were referred to detention facilities between 2012 and 2016, though there is no way to parse whether they arrived unaccompanied or were separated from families."
Snippets from the Left
The Trump Administration Is Lying About Its Family-Separation Policy
Vanity Fair
"Facing mounting outrage in the media over its new 'zero-tolerance' policy at the border, the Trump administration is deliberately misleading Americans about the thousands of migrant children it has forcibly separated from their families. The objective, according to people close to Donald Trump, is twofold: 'deterrence,' as Chief of Staff John Kelly explained last month, and political extortion.
...
The images emerging from these detention centers, where traumatized young children are kept in chain-link pens, have drawn comparisons to some of the worst episodes in American history, including the internment of Japanese Americans during WWII. Instead of ending the controversial policy, however, President Trump has promoted a contradictory and confusing message about family separation. At times, he has blamed Democrats for what he has described as their “law” (it is not a law); at others, he has suggested that family separation is indeed his policy, but that Democrats have forced him to take action by not agreeing to new immigration-reform legislation.
...
The history of the policy, however, does not support the administration’s narrative. It is true that at the height of the 2014 migrant crisis, when there was a surge in unaccompanied minors crossing the border, the Obama administration placed a large number of families in detention centers. But these families—many of them fleeing violence in Central America—were allowed to remain together while their claims were being processed. Under Trump’s “zero-tolerance” policy, however, all adults caught crossing the border are criminally prosecuted, with no exceptions. As a result, thousands of children have been taken away from their parents and treated as if they had tried to cross the border alone."
Snippets from the Center
Trump signs executive order on immigration, but says 'zero tolerance' will continue
USA TODAY
"President Donald Trump, bowing to a deepening humanitarian crisis along the southwest border, signed an executive order Wednesday that promises to halt family separation while insisting that the administration's 'zero tolerance' policy to prosecute all illegal immigrants would continue.
'We’re going to have strong, very strong borders, but we’re going to keep the families together,' Trump said. 'I didn’t like the sight or the feeling of families being separated.'
...
The order's title, 'Affording Congress an Opportunity to Address Family Separation,' puts the onus on lawmakers to provide a long-term fix with legislative action.
It authorizes DHS to keep families together when they are detained at the border, unless officials determine that the child's welfare is at 'risk.' It also authorizes the Defense Department to provide facilities for housing those families.
...
Still, prior to his announcement, Trump again blamed Democrats for the problems, asserting that Republicans wanted security.
'I am working on something - it never ends!' he tweeted."
Discover more on this topic on AllSides.
Immigration, Illegal Immigration, Donald Trump, Barack Obama, Story of the Week, News