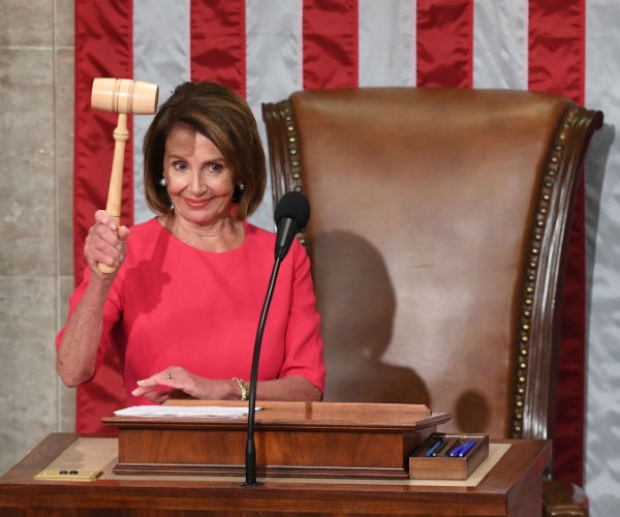 As Democrats took control of the House of Representatives on Thursday, Nancy Pelosi won the speakership, vowing to focus on climate change, health care, and LGBTQ equality.
Some criticized Pelosi and the Democrats for their agenda, characterizing it as fiscally irresponsible, weak on border security, and obstructionist in their plans to investigate President Trump. Others hailed the new Speaker as a political powerhouse capable of outsmarting Trump and savvily executing the party's legislative goals over the next two years.
Check out some other big stories this week: Trump Holds First Cabinet Meeting of New Year; Chuck Todd Says 'Meet the Press' Is 'Not Going to Give Time to Climate Deniers'; and Former NY Times Editor Criticizes Paper's 'Unmistakably Anti-Trump' Bias.
Snippets from the Center
Nancy Pelosi Wins Speaker Race, Reclaims Gavel for Second Time
Wall Street Journal
"Mrs. Pelosi picked up the majority of votes needed to win the speaker’s gavel and lead the House in an era of divided government. She will take the reins of an ideologically diverse Democratic caucus into the 2020 presidential race. She won 220 votes to 192 for Republican minority leader Kevin McCarthy of California. Eighteen members voted for other candidates and three members voted present.
...
'This House will be for the people,' Mrs. Pelosi said in prepared opening remarks. She said she wanted to work 'to lower health costs and prescription drugs prices, and protect people with pre-existing conditions; to increase paychecks by rebuilding America with green and modern infrastructure—from sea to shining sea.'
...
Both chambers are expected to focus on reopening portions of the government which have been closed for 13 days due to a funding lapse. House Democrats plan to put forward a package of six full-year spending bills that would fund most of the shut-down part of the government through September. Separately, they will propose a short-term extension of current funding through Feb. 8 for the Department of Homeland Security."
Snippets from the Right
If Nancy Pelosi Were a Republican
Newsmax Opinion
"Nancy is hell-bent on passing socialist legislation, denying any funding for the border wall, investigating President Trump and his family in every conceivable aspect of their current and former lives, and possibly impeaching the president.
Pelosi isn’t remotely shy about her objectives. She is proud to carry the open-borders mantle, not caring about the injurious consequences. I believe she can and will cause a lot of damage to America and to Trump.
...
If Nancy Pelosi were Republican — a fearless, feared, persevering defender of freedom, small government, and the Constitution — her fervor would be contagious, and the U.S. would be moving on a prudent trajectory.
Unfortunately, neither is true.
Instead, with a national debt of nearly $22 trillion — and endlessly climbing — we are bleeding, and we don’t even know it."
Snippets from the Left
Speaker Pelosi should inspire Americans — and terrify Trump cronies
Jennifer Rubin
"The transfer of power in about two hours should inspire confidence among Americans — and fear among Trump cronies and sycophants. Pelosi remains the only female speaker, is the first speaker since Sam Rayburn to reclaim the gavel after losing it and, therefore, claims the title of the most formidable Democrat currently on the stage and ranks among the top tier of speakers from either party. She has reached higher than any other female politician. Moreover, she will now preside over a House with the power of the purse, of oversight and of impeachment.
It is her day insofar as she will have the ears and eyes of the press, if not the entire country, riveted on her as she tells the country, in effect, 'Help has arrived!' She need only control her own members (those freshmen are about to learn how much power the speaker really has) to shift the onus of the shutdown to the Senate and White House.
As Pelosi plunks down bill after bill in front of McConnell and Trump, she’ll be able to say, 'We’re doing our job — why aren’t they?' McConnell and Trump better come up with something better than the president’s gusher of lies (sorry, getting taxpayers to pay for a wall he said Mexico would fund is not 'keeping a campaign promise'), exaggerations (there aren’t 30 to 35 million illegal immigrants in the United States, as he claims) and insults. For the first time, he’s going to face a consummate politician capable of running circles around him. 2019 should be a fascinating year in politics."
Discover more on this topic on AllSides.
US House, Politics, Nancy Pelosi, Democrats, Donald Trump, Story Of The Week, News