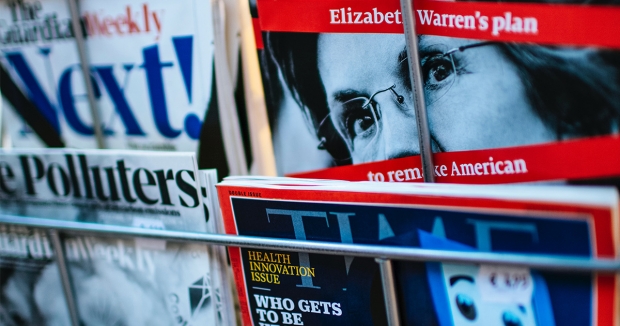 You hear a whole lot of talk about “narrative” these days.

Who is setting the narrative? Which candidate is winning the news cycle? Which party’s message is breaking through?

It all gets to feeling a bit tactical. I guess that’s the point. We live in the age of the attention economy, with politicians, corporations, law firms and everyone else seeking to shape the way we receive information and understand the world.

The news media in particular is widely distrusted today (only 40 percent of Americans trust “mass media”). Yet no one would doubt the importance of the media industry as an institution. How important has Fox News, the Wall Street Journal and talk radio been in channeling the beliefs of conservatives in a way that allows the majority of right-leaning America to feel like they have a voice in a national conversation that can seem deaf to their values? How important has CNN, MSNBC and the New York Times become in giving voice to liberal and progressive America’s opposition to the Trump administration in a recent era of deep despair for the American left in particular?

But this very separation we all live in leads us to ally with one universe of “narratives” over the other—and that’s part of the problem, isn’t it? There’s even a standard narrative as to how this happened, a “fall from grace” story that most of us know:

Once upon a time there was honest journalism. Walter Cronkite and the big networks were trusted by all Americans. Then came the commercialization of information, the 24-hour news cycle, the repeal of the fairness doctrine, talk radio and then Fox and MSNBC (before we even get to social media).

The beginning of this story is wreathed in nostalgia, and we all have to be wary of seeing the past through rose-colored glasses. As far as the present is concerned, there is a debate to be had over whether the problem with American media today is corporate interests, liberal bias, political cronyism and/or just plain old sloppy journalism.

We’re having these conversations at Braver Angels and you have the opportunity to join them. But, perhaps unlike much of the mass media, we are also telling our own story about and to the American public that you are a part of.

This story is a story of all of us: It is the story of the Trump supporting former small town sheriff named Greg Smith who came to see himself in a liberal Muslim immigrant named Kouhyar Mostashfi with whom he would grow a bond of brotherhood. It is the story of a lesbian activist named Sheila Kloefkorn who would find herself cherishing the trust of a conservative Catholic named Glenn Stanton with whom she parts on politics but shares a love of humanity. It is the story of a violinist from Vermont named Sage Snider who looked past politics she thought were ugly to fall in love with the beauty in the souls of conservatives in Nashville through the music of Bluegrass. It is the story of a man from Mississippi named David Blankenhorn who across the arc of his life would be scorned for speaking up for the rights of Black people and the gay community just as he would be reproached for standing for the dignity of southerners and conservatives.

These are but a sprinkling of the stories we find in Braver Angels. Stories that show us the majestic breadth of humanity and make up the complex family of America. Across our differences we have a part in each other’s history and a stake in each other’s future.

The media may not be able to paint this fuller picture of America. But until they do, we will.

John Wood, Jr. is the National Ambassador at Braver Angels. He has a Center bias.

Sign up for the next AllSides Talks event on Trust.