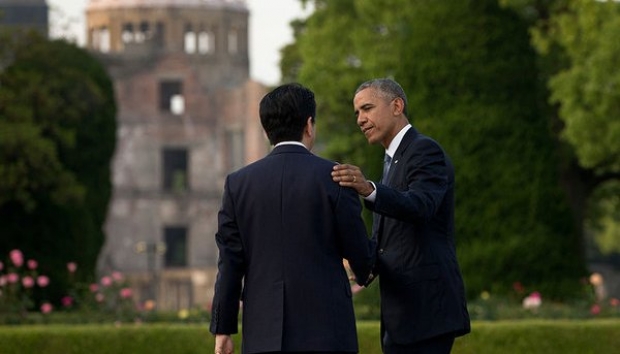 And how can you be enthusiastic about it?

Lots of people are very enthusiastic about their choice for President, despite these problems and historically low favorability ratings for the frontrunners. And these people are not evil or dumb, despite what your friends or chosen media outlets are telling you.

They are just human, and we humans love to convince ourselves that we are right, even if it means lying to ourselves.

Take a look at two big stories last week: new revelations about the Clinton email scandal and the Obama Hiroshima trip. As we see all the time at AllSides.com, the news coverage and people's response to these events ran the gamut.

My op-ed for the Christian Science Monitor late last week showed how we often perform fantastic mental gymnastics to believe what we want to believe, and to prove we are right. The op-ed was titled "The politics of perception: why we always think we're right". Here it is as originally published in the Politics Voices section of the Christian Science Monitor. (This post also appeared on LinkedIn here.)

Steven Colbert’s take on how people would react to the State Department’s recent reportstating that Hillary Clinton violated federal standards in her use of a private e-mail server – and that past secretaries of State were slow to follow standards – hit the nail on the head:

Funny or disheartening, this is nothing unusual. We love being right.

Another case in point – President Obama’s recent trip to Hiroshima.

Many Obama supporters see this as a historic trip supporting his vision of a world with fewer nuclear weapons. Others note that United States disarmament is slowest since 1980 and that we are planning to seriously modernize our nuclear weapons.

For Obama’s supporters expecting better from a president who speaks so eloquently about the need to reduce nuclear weapons, this contradiction is the result of being forced to compromise with Republicans.

For many hawks, these actions reflect Obama’s recognition of reality, including the dismal reliance of our nuclear defenses on outdated 1970s technology.

For peaceniks, this shows once again Obama’s lack of true conviction for the cause of peace.

For detractors from the right, this is another example of rhetoric versus reality, a dangerous practice as it sets America up with false hopes and false narratives that direct us toward wishful thinking and away from practical solutions to real problems.

Once again, prior beliefs are confirmed, regardless of which side of the debate you support.

This tendency is remarkably powerful. And being smarter might make you even more susceptible to this bias.

This is one of the reasons I believe there is no such thing as unbiased, at least not when people are involved. (And don’t blindly trust technology like Facebook’s Trending Topics, either.) Everyone is biased by what they know, what they don’t know, and all of their life experiences.

So faced with that reality, how can we as individuals in a representative democracy approach and respond to the issues of today in the best possible way, not overly influenced by biases that may lead us down the wrong path?

Last weekend, I participated in a two-hour conversation with five others about the future of nuclear weapons. We followed the Living Room Conversations structure – a powerful format designed to revitalize civil discourse in America and bridge the gap between conservatives and liberals. We made sure this small group represented a breadth of perspectives and experiences, including political ideology (half left, half right), ages (from 19 to 71), gender (four women, two men), and ethnicity (four white, two minority). Not perfect, but OK.

It’s been more than 70 years since the first and last nuclear bombs were used, and we all shared the common desire to see no nuclear bomb incidents in the next 70 years. No one walked in the room with a pre-conceived solution, but you did hear some stereotypical positions.

From the left, we heard the guns versus butter argument and the “no more nukes – it’s just logical” position. On the right, we heard more breakdowns of today’s nuclear threat (current stockpiles, proliferation, nonstate and rogue-state actors, and safety), plus a willingness to discuss proactive measures, such as Israel’s bombing of nuclear weapon facilities in Syria.

But you also saw an appreciation for people from the other side and even some of their positions. Though I personally have hawk tendencies, I was moved by the guns versus butter argument, and want to know more about how the $700 billion will be spent on modernizing our nuclear weapon systems. Though the college student expressed a traditional “no nukes – we can talk this out” bent, she was the most interested and vocal about learning more about the nuclear threat from our ex-military participant.

Yes, we can have civil conversations about hot topics. And yes, even though our stances rarely change overnight, they can be improved, moderated and changed over time when we are in a safe environment exposed to a variety of perspectives, facts and personalities. And working together becomes even easier when we realize we are all in the same boat, as social psychologist Jonathan Haidt points out.

There is much more to discuss about bias, polarization and how we as a society can reach beyond that. I’ll save that for later articles. So for now …

Especially when it comes to life and death issues like nuclear weapons, let’s go beyond our petty difference and biases. We can listen and learn from each other, and protect ourselves and future generations. It’s worth the effort.