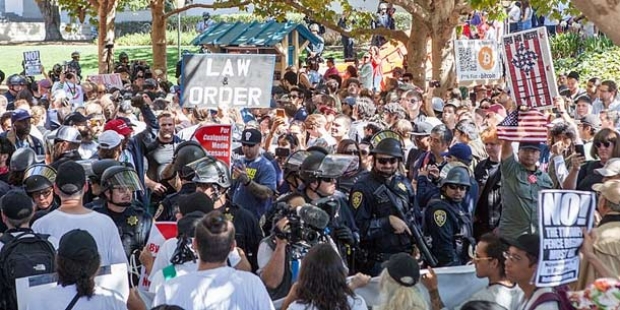 Should all speech be protected? Is some speech too hateful for the public sphere? When it comes to free speech on campus, the left and right diverge on how to move forward. But is there common ground?

This article is the first in a series representing a collaboration between The Saturday Evening Post and AllSides. The purpose of the series is to take a divisive issue and explore not only the differences but also the commonalities on both sides of the debate.

Clashes over free speech have dogged the country for the past several years, whether at Google or on the football field. But perhaps no part of society has been more plagued by dissension than the university setting, where the arrival of a conservative speaker sometimes incites violent protests.

UC Berkeley’s September 2017 attempt at a “Free Speech Week” was an odd conclusion to a year full of conflict over the First Amendment. After a great deal of buildup and media hubbub, the event, which publicized several right-wing pundits, ultimately unraveled in front of the entire nation. While the school cited a lack of student preparation, the organizers said that a laundry list of bureaucratic hurdles doomed any success from the start. Regardless of the reason, its demise is emblematic of a larger issue — the debate over the parameters of free speech.

Like most political issues these days, the conversation has rapidly devolved into a showdown across the aisle: right vs. left, with little room for gray. But amidst the disagreement, is there any common ground?

Serena Witherspoon is a UC Berkeley student who identifies as progressive. The roster of speakers slated for Free Speech Week raised many eyebrows (Witherspoon’s included), with guests like Ann Coulter and Milo Yiannopoulos who are as known for their inflammatory approach as they are for their right-leaning political views.

“I found the list of speakers intentionally offensive to the communities on campus,” Witherspoon said. “I looked up videos of each of these people speaking to get a better idea of who exactly was being invited. I was particularly struck by the anti-trans, anti-gay, anti-undocumented messages that were openly expressed.

“As a campus that is home to many trans, gay, and undocumented students, inviting these speakers is inviting hate to be openly expressed against our own campus community,” she said.

It’s an argument that Mike Wright, who spearheaded the attempted Free Speech Week, has often heard during his tenure at school. “This is something that a lot of people don’t really, I think, understand. The idea is that if you want to hear from someone you must endorse everything that they say,” he said. But Wright, who is former editor-in-chief of the school’s conservative Berkeley Patriot, argues that’s not true. “We just want to hear from a range of perspectives that we don’t often hear from on this campus.”

Much like Witherspoon, Wright doesn’t see eye to eye with many of the speakers who were invited to the Free Speech Week. He’s a conservative, but a self-avowed “middle-of-the-road” variety, who is as interested in hearing ideas he disagrees with as ones he accepts as truth. “Being surrounded by things that make you uncomfortable makes you stronger, makes you better able to articulate what you believe and understand why you believe it,” he said. For Wright, this diversity of thought is of utmost importance.

Dr. Alison Reed, a Professor of English at Old Dominion University, is a recent graduate of UC Berkeley’s SoCal sister school, UC Santa Barbara. Over the last few years, she watched with nervous attention as Milo Yiannopoulos worked the University of California circuit — first at UCSB in 2016, and then eventually on to UC Berkeley the following year.

When it comes to Reed’s politics, she jokes that she’s likely on the watch list of “so-called, ‘dangerous liberal professors.’” Although her partisan preferences clearly differ from Wright’s, she shares his appreciation for diversity, which is all the more meaningful to her after transitioning from student to instructor. But it’s for this same reason that she opposed Yiannopoulos’ speeches, as she views his incendiary nature as antithetical to that mission.

“I really don’t think that any institution that proclaims diversity, multiculturalism, and inclusivity can use institutional monies to support hateful speakers,” says Reed. She firmly believes that offensive rhetoric leads to tangible violence against the marginalized, citing the white nationalist protests in Charlottesville, Va. that resulted in the death of Heather Heyer.

“If you invite speakers to campus who openly advocate for hate and genocide, you’re saying that as an institution you do not truly care about dialogue or diversity,” she says.

Enter Robby Soave, a libertarian journalist and Associate Editor at Reason magazine. Much like Wright, he’s a free speech advocate and an unapologetic critic of censorship. But, like Witherspoon and Reed, he finds the contentious list of speakers unproductive, at best.

“[Conservative student organizers] want to bring someone who isn’t really a conservative or a spokesperson for their group, but will make headlines because they’ll generate this over-the-top, shut-down event,” he says. Referencing Yiannopoulos as the quintessential prototype, Soave says these pundits “don’t have a deep reservoir of conservative knowledge, who really their purpose is to be shut down by this cabal of students who oblige, time after time.”

“It’s a serious blow to actual intellectual engagement and discussion on campus,” he says.

As division continues to mount on college campuses, all four people see the need for respectful dialogue. But their differences probe at a central question: Can civil discourse really be “civil” when the subject matter is hateful?

Although Mike Wright compiled the scandalous list of guests for Berkeley’s Free Speech Week, he says the overall approach to discussion matters to him most of all. “I really support the idea of us sitting down and having reasoned discussion that hears from all sides in a very civil and polite manner.”

Civility is important to Witherspoon in her progressive politics, as well. The Berkeley sociology major works for Living Room Conversations, an organization that hosts group discussions on hot-button issues with people across the political spectrum. They provide a step-by-step model for civil discourse to combat polarization.

With her work at LRC, her opposition to Berkeley’s Free Speech Week boils down to her desire to assuage partisan division. “The intent seemed to be to shock and offend the larger populace of the school. I am willing to engage with ideas different from my own, but I did not agree to the terms set forth by the free speech week organizers, nor was I asked,” says Witherspoon. “I feel that the ‘Free Speech’ organizers are more concerned with making a statement than the outcomes that statement has for those around them.”

However, Wright saw his Free Speech Week as an opportunity to alleviate polarization — not inflame it.

“I think that the ability for people to hear from the other side could be helpful [in curbing partisan rancor],” he says. In a sense, he hoped he could bridge two divides — on a smaller scale, between the conservative speakers and the UC Berkeley faculty that “fundamentally distrusted each other,” and on a loftier scale, between peers with conflicting political beliefs.

Dr. Reed sides squarely with Witherspoon here. While some worry that limitations on free speech unfairly silence certain ideas, she argues that the real casualties are minority students who are defenseless against a set of beliefs that imperil their safety.

“Hate speech is not free. Its price is paid in human lives,” says Reed.

Reason’s Soave takes issue with labeling anything as “too hateful” for a public forum, and he’s quick to point out that, while reporting on the issue, he’s seen people who inevitably disagree on just what, exactly, crosses the line. What’s more, he asserts that a government with a conservative bent would be more inclined to block speech from the left — not the right.

“Hate speech would invariably be enforced not against people like Milo, but against leftist activists,” he says. However, that doesn’t mean he wants to engage with every right-wing speaker making the rounds.

“I think at this point the best thing is to not go to Milo events, and certainly not to Spencer events,” he says, referring to Yiannopoulos and the notorious white supremacist, Richard Spencer. “Even if you wanted to go to protest him, the strongest protest that can be sent to these people are empty auditorium seats,” says Soave.

A Rejection of White Nationalism

This repudiation of the white nationalist mantra is also something the four agree on completely, with Wright stating that he did not want to invite anyone to Berkeley’s Free Speech Event who would espouse such views.

As a student of color, this is particularly personal for Witherspoon. “I appreciate the term anti-fascist and I think that we should all oppose fascism and the alt-right and white supremacy,” she says. “I think that accepting hate speech does lead to a more fascist tolerant society and creates a toxic environment where people of color do not feel able to live at a full capacity.”

Although all four are in the same camp — insomuch that white supremacist, fascist views are worthy of full rejection — the two sides split on how to combat them. Should the ideas themselves be outlawed? Or should students simply stop carrying out heated protests, which inevitably push white nationalists into the media spotlight?

A Long History of Conflict

It’s a debate that likely won’t end soon, and it’s one that started long ago. In the 1960s, members of the New Left fought to openly express their then-provocative ideas on campus, protesting participation in the Vietnam War and giving voice to women, gays, and people of color. Republicans opposed this freedom of expression.

UC Berkeley was the original setting.

The paradox isn’t lost on Soave, who has watched the tables turn over the last ten years. “For so long before that it was always, even on colleges, religious conservatives [who wanted to censor liberal ideas],” he says.

While it’s a rapid role reversal, perhaps it speaks to a fine line between two entrenched political parties. Although Democrats and Republicans may be in ultimate agreement on the end-game — a commitment to civil discourse, a desire to abate political polarization, and a stark opposition to fascism and white supremacy — they decidedly diverge on how to move forward.