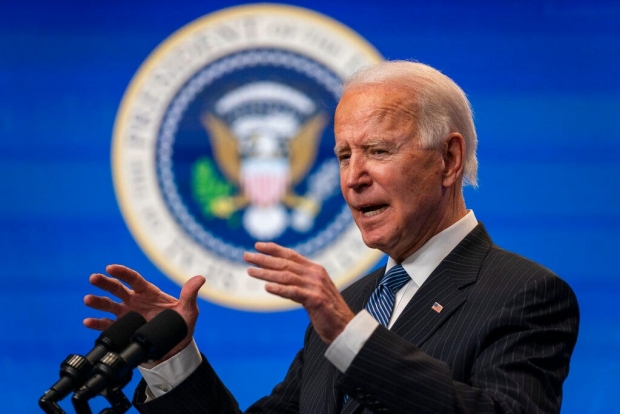 Editor's Note: This article originally appeared on usatoday.com under the headline, "Biden said he wanted to unite Americans. Then he moved further to the political left."

In our world where agreement, especially among the politically fractured media, is rare, there seems to be a general consensus on one thing: President Joe Biden is governing further left than expected. From The New York Times on the left to the National Review on the right, the press is in general agreement.

But is Biden uniting or dividing the country while he moves left?

Biden’s inaugural address sounded notes of unity, but historically that has been a standard feature for new presidents, with the noted exception of President Donald Trump’s inauguration.

When Biden said we just needed “enough of us” to come together, that encouraged many of us devoted to bridging divides because it had the sound of realism. Maybe these weren’t shallow words.

Many welcome an end to presidential tweet storms and the nonstop media reactions to them. With a president who is less combative with the press and shares a similar political philosophy with the majority of journalists, the public is enjoying a relative calm after the storm.

But division comes in many forms.

Within Washington, D.C., observers watch how legislation is formed. Disagreement is expected (and often a good thing), but how an administration engages with the other side for the common good matters.

Does the this administration actively reach out to and collaborate with the other side? That doesn’t appear to be the case, at least not yet, based on the content of major legislation and the lack of meetings at the White House with Republican leadership.

Critics charge that meetings with Republicans are just for show as Biden aides attempt to redefine bipartisanship by pointing to GOP voters’ support of his bill, even if it didn’t get a single vote from Republican lawmakers. Conversely, many Biden supporters say Republicans aren’t willing to work with them.

The parties disagree, and then it often devolves to the “she hit me first — no, you did” banter of a grade school playground. In other words, politics as usual.

The most worrisome danger sign, however, is Biden’s rhetoric around the new Georgia election legislation.

Biden explicitly described the election law as racist by comparing it to Jim Crow laws once used in the South to enforce racial segregation. This got lots of news coverage across the spectrum, dominating headlines and effectively defining the Georgia laws for many people.

Then some pushback started to get attention. The Washington Post noted that Biden falsely claimed that the law “ends voting hours early” (its fact-checker gave it Four Pinocchios — a “whopper”).

More attention was given to research that shows voter ID laws don’t significantly reduce voter fraud or turnout, the two main arguments from opposite sides of the debate.

Commentators, especially on the right, challenged the comparison, calling it “a big lie."

Another way to look at it is as politics as usual, especially around voter laws.

Dan Schnur, a centrist professor at University of California, Berkeley, and a former national director of communications for Sen. John McCain, says that “neither side can back up their claims.” Both sides use this kind of fearmongering to “whip their most devoted supporters into a frenzy.”

Partisans will remain divided on the specifics of the law. Inflaming those divisions drives passions and motivates voters. It is often good election politics and can lead to one party or the other gaining more power and changing election laws, often to their own advantage.

That is why it is essential for the rest of us to work together, talk with each other across divides, and insist our politicians collaborate at least a little.

Republican West Virginia Sen. Shelley Moore Capito, who was part of a bipartisan group hosted by Biden in January, recently told PBS: “I always thought, when you negotiate, you come from two different positions, and both people move. That didn't happen. We moved as a group of Republicans. The president never moved and basically left us in the dust.”

While these tactics might lead to short-term political successes, we the people suffer with decreasing confidence in our system and one-sided legislation that often favors some groups over others.

That’s divisive, and that’s politics. Both parties do it. Not all effective politics is divisive, but division works.

Are Biden’s actions dangerously divisive, simply necessary in this partisan political world, or positive steps for the overall good? Your answer probably depends on your own political leaning, but make no mistake, both parties often rely on dividing us to support their own agenda.

That is why it is essential for the rest of us to work together, talk with each other across divides, and insist our politicians collaborate at least a little.

Left to their own devices, politicians will do whatever works best to get them elected, and that usually means dividing us against each other.