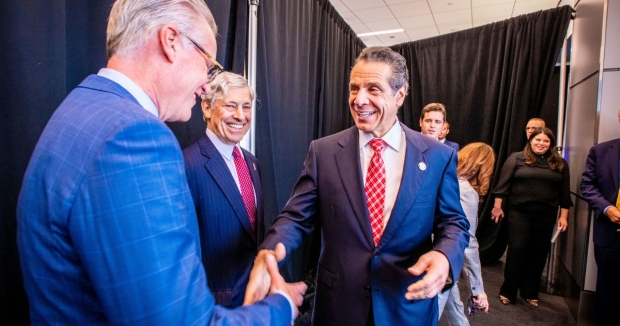 I believe Lindsey Boylan and Charlotte Bennett and Anna Ruch.

I believed Christine Blasey Ford and Karen McDonough and Stormy Daniels. And Monica Lewinsky and Kathleen Willey and Paula Jones. And Anita Hill and Mary Jo Kopechne, for that matter.

Why in the world is this so difficult?

Sexual predators don’t belong in office. They belong in rehab – or in prison. But once again, we are seeing a predictable, lamentable, execrable outbreak of selective outreach and equally selective myopia that springs from the worst type of political polarization, knee-jerk partisanship and a tunnel-visioned means-justifies-the-ends approach to public policy and governance.

Democrats argued that Clinton shouldn’t be impeached because he supported abortion rights and health care reform. Republicans defended Trump because he promised to build a wall at the U.S.-Mexico border and cut taxes. Conservatives fought for Clarence Thomas and Kavanaugh because they wanted the Supreme Court to move to the right. Liberals rationalized Ted Kennedy because they wanted the Court to shift leftward. Caught in the middle of the partisan crossfire were generations of young women who were objectified, harassed, assaulted or worse, while those who should have known better chose to look away.

This was supposed to have changed a few years back, when the grotesqueness of Harvey Weinstein lit a fire that led to the creation of a #MeToo movement which quickly leaped the cultural fence from the entertainment industry to the campaign trail. A newly awakened political patriarchy confronted its past, vowed to do better, and quickly sacrificed Al Franken and Roger Ailes to prove their newly-discovered sense of outrage.

One of the most notable side stories to emerge at the height of the #MeToo frenzy was the admission by many leading Democrats that their defense of Clinton back in the 1990’s was ill-considered and should not be repeated. But in that Trump-ian era, those recriminations quickly passed. Before long, Senator Kirsten Gillibrand, the first of Franken’s colleagues to call for his resignation, began to suffer considerable political blowback that contributed to the swift end of her presidential campaign.

Trump himself was the driving force behind this reorientation. During his 2016 presidential campaign, the emergence of video that recorded him speaking in crude and misogynistic terms to an Access Hollywood reporter caused many leading Republicans to call for him to leave the race. When Trump persevered, leaders in both parties concluded that such behavior was not necessarily fatal.

But it was Kavanaugh’s Supreme Court confirmation that fully restored the primacy of partisanship over morality. Republicans decided to stand with their nominee, questioning the veracity of Blasey Ford’s accusations for little reason other than she was challenging someone on their side and not the other. As a result, Democrats seem to have concluded that they could no longer unilaterally disarm in the political battles of the day — even if it meant sacrificing the safety of young women who happened to work in close proximity to powerful men.

Throughout, the hypocrisy in both parties has been obvious and pervasive. Republicans who were outraged at Clinton and Kennedy’s conduct found reasons to ignore or defend Trump’s transgressions. Democrats who had stood by Clinton then fought to hold Trump and Kavanaugh accountable. Now the allegations against Cuomo have put the New York governor’s party in an uncomfortable position once again, forcing them to explain whether they support or oppose his removal from office.

While some Democrats have called for his resignation, most are content to hide behind the state attorney general’s investigation into the accusations against Cuomo. But that will only buy them a certain amount of time until the inquiry has been completed. At which point, they’ll be forced to decide whether to stand with their party – and its disgraced governor – or on the side of principle that allows a young woman to go to work each day without being forced to prepare for the possibility of harassment or assault.

Most Republicans have already decided that party comes before such principle. Let’s see if the Democrats do any better.

Want to talk about this topic more? Join Dan for his weekly webinar “Politics In The Time of Coronavirus” on Tuesday mornings at 11 AM PST. You can register for it here. https://www.lawac.org/EventDetail/eventid/30843. Or read more of Dan’s writing at: www.danschnurpolitics.com.