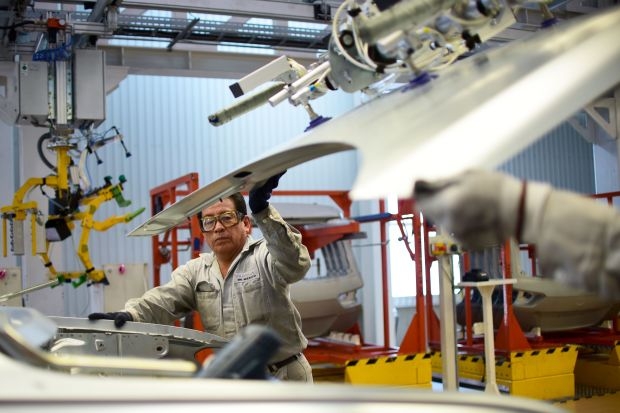 The U.S. and Canada on Sunday reached a new trilateral trade deal with Mexico which will supersede the North American Free Trade Agreement (NAFTA).
Supporters of the revised pact, known as the U.S.-Mexico-Canada Agreement (USMCA), have characterized it as a win for free trade, while detractors have said it will merely fix problems that President Trump created prior to the contentious negotiations.
Take a look at the media coverage surrounding Brett Kavanaugh's confirmation. We'll continue to update it as events unfold.
And check out some other big stories this week: Senate Begins Reviewing FBI Report On Kavanaugh, U.S. Will No Longer Grant Visas to Diplomats' Same-Sex Partners Unless They're Married, and Justice Department Sues California Over Net Neutrality Law.
We're thrilled to announce the second National Week of Conversation! The first was a rousing success, with over 130 organizations participating, and more than 120 public and countless private conversation events in 32 different states. Join us Oct 5-13 as we bridge divides, one conversation at a time.
Snippets from the Center
Trump Aims to Model New Trade Deals on Revised Nafta
Wall Street Journal
"The Trump administration aims to step up trade talks with other countries, using its new pact with Canada and Mexico as a template to redefine rules on everything from foreign exchange and labor markets to how U.S. partners do business with China.
U.S. Trade Representative Robert Lighthizer called the new North American trade deal a 'paradigm-shifting model' of American policy that sends a tough message to the rest of the world. The U.S. will be less worried about running afoul of the World Trade Organization, a watchdog Washington helped create. Instead, it will focus more on using trade deals to confront what officials describe as 'nonmarket' forces distorting world commerce.
And Washington will no longer see trade pacts as a way to foster global supply chains for its corporations. Instead, it will prioritize tougher standards for goods flowing into the U.S. in a bid to steer more manufacturing back home.
The underlying principle, as Mr. Trump himself said in unveiling the North American accord this week, is that trade partners should consider it “a privilege for them to do business with us.” Access to the U.S. market will become increasingly contingent on countries adopting American rules and standards, from intellectual property protections to higher wages."
Snippets from the Right
A Victory on Trade
Townhall Opinion
"President Trump has been right in his criticism of NAFTA and other trade deals that have left the United States at a disadvantage, sidelining American goods, stifling job growth and allowing other countries to steal America's intellectual property.
...
At first, Mexico refused to alter its trade policies, but now it has. Canadian Prime Minister Justin Trudeau announced strong opposition to making compromises or changing what Trump said was a tariff as high as '270 percent on U.S. dairy products.' However, hours before a midnight deadline, CNN reported, '...the U.S. and Canadian governments agreed to a deal that would allow U.S. farmers greater access to Canada's dairy market and address concerns about potential U.S. auto tariffs.'
...
Democrats, like Senate Majority Leader Chuck Schumer, can only say they want to see details. How do they oppose more jobs and higher wages for American workers?
Past presidents of both parties have mostly bowed to globalists and other nations that have put the interests of their countries first. President Trump, starting with his campaign, promised to put American interests first, not to the detriment of other countries -- they also are benefitting -- but to even out unfair deals that have harmed America and Americans."
Snippets from the Left
Trump’s ‘New’ Canada-Mexico Trade Deal Has All Kinds Of Improvements? Thanks, Obama.
HuffPost
"With critical elections approaching, President Donald Trump on Monday declared a rebranded trade deal with Mexico and Canada a major victory for himself ― even though it relies on key elements negotiated by his predecessor, President Barack Obama, for an agreement Trump had called a disaster.
...
But the majority of the 'new' items in the deal announced late Sunday were negotiated over a period of years by the Obama administration as part of the Trans-Pacific Partnership. That agreement included a dozen nations in the Americas, Southeast Asia, Japan and Australia, reducing trade barriers and increasing environmental and labor standards.
...
One significant change to both NAFTA and TPP involves the rules regarding automobile manufacture. NAFTA currently requires 62.5 percent of a car’s value to be made in North America to move across borders tariff-free. The revised deal would increase that to 75 percent, and would require that at least 40 percent of the labor for the car be paid no less than $16 an hour.
[Jared] Bernstein, who is now a senior fellow at the liberal Center on Budget and Policy Priorities, said those new rules could help American workers by reducing the incentives for U.S. automakers to build new plants outside North America, and by reducing the wage differential between the United States and Mexico."
Discover more on this topic on AllSides.
Tags:
Trade
NAFTA
USMCA
Donald Trump
Story of the Week
News