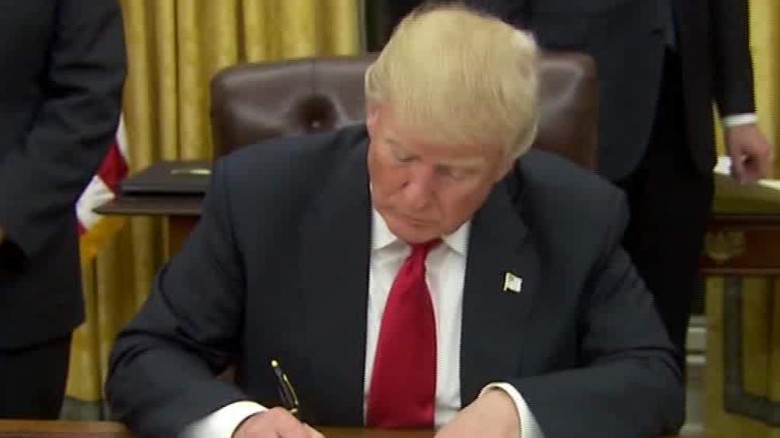 Donald Trump has been president for almost a week now. And it's been a busy week. On Saturday, the new president signed his first executive order which signaled the start to dismantling to Obamacare. Monday morning Trump announced the US would be pulling out of TPP. On Tuesday, Trump signed executive orders funding both the Keystone and DAPL pipelines. Wednesdayhe vowed that there will be major investigations into widespread voter fraud that he alleges occurred during the 2016 presidential election. Finally, this morning, he threatened to cancel his meeting with Mexico's president Nieto if Mexico refused to pay for the border wall. The result of which was for Nieto to cancel it before Trump could.
The AllSides Dictionary continues to enlighten and interest people across the spectrum. The Times Higher Education wrote an article about the academics behind this project: Academics use new dictionary to aid students in era of fake news.
Snippets from the Left
It’s Been a Long Week
Slate
"In his first week in office, Donald Trump has begun to inflict immense damage across a wide range of policy areas. He is starting to build the wall, ban refugees, and bar Muslim immigrants. He has cut billions of dollars in funding from U.N. agencies and green-lighted the Keystone XL pipeline. He has placed a freeze on government hiring and prohibited international NGOs that receive U.S. funding from doing so much as uttering the word abortion.
More damage is in the works. With encouragement from the White House, Congress is already preparing to gut Obamacare and slash taxes on the rich. Judges in Texas are hearing a challenge to marriage equality and governors from Missouri to New Hampshire may soon ratchet up restrictions on labor unions."
Snippets from the Right
Trump Week One: The return of the nation-state
Rich Lowry, NY Post
"The first week of the Trump administration has been a vindication of the American nation-state.
Anyone who thought it was a “borderless world,” a category that includes some significant portion of the country’s corporate and intellectual elite, has been disabused of the notion within about the first five days of the Trump years.
Trump’s inaugural address was widely panned, but early polling indicates it was popular, which isn’t surprising since the broadly nationalistic sentiments in the speech were bound to strike people as common sense."
Trump’s Herky-Jerky First Week
Peggy Noonan, WSJ
"Every new administration begins awkwardly...But the Trump Hundred Days looks to be more awkward than usual.
...It was said that Reince Priebus, the new chief of staff, will never be able to herd these cats. It was said the cats will use him as a scratching post....Those who observed the transition say Mr. Trump will, inevitably and due to nature and habit, be a spokes-of-the-wheel chief executive, when he’d be better off with a strong chief of staff and clear lines.
We’ll see. So will he. White House management styles evolve, usually as early trouble develops."
Snippets from the Center
What's Trump done so far? His productive first week and how it stacks up to previous presidents
CNN
"'An executive order is a legally binding document that declares government policy. Unable to reverse a law passed by Congress, it is more often used to delegate and direct government agencies and departments.
Since taking the inaugural oath, Trump has, so far, signed four executive orders.
Day 1: Minimizing the Economic Burden of the Patient Protection and Affordable Care Act Pending Repeal
...Day 4: Expediting environmental reviews and approvals for high profile infrastructure projects...Day 6: Border security and immigration enforcement improvements...Day 6: Enhancing public safety in the Interior of the United States"
Discover more on this topic on AllSides.
Tags:
Story of the Week
News
Donald Trump
White House