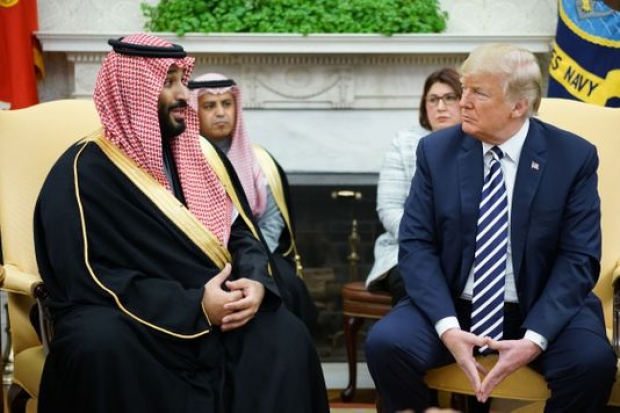 President Trump announced that the US will remain a "steadfast partner" of Saudi Arabia, signaling there will be no new punishment for journalist Jamal Khashoggi's murder.
Some have criticized Trump for not being harsh enough on the Saudi regime, as the CIA concluded that Crown Prince Mohammed bin Salman facilitated the killing. Others have said that his approach is strategic and will preserve US-Saudi relations and counterterrorism efforts in the Middle East.
Happy Thanksgiving Eve! Nervous about those inevitable political discussions that happen around the dinner table? Take a look at our suggestions for how to navigate tricky conversations with your political other.
Check out some other big stories this week: Judge Rules Asylum Claims Must Be Accepted,House Oversight Committee to Probe Ivanka Trump's Email Use, and White House Restores Jim Acosta's Press Credentials.
Snippets from the Center
Statement from President Donald J. Trump on Saudi Arabia, Khashoggi murder
President Donald Trump, as published in USA TODAY
"After my heavily negotiated trip to Saudi Arabia last year, the Kingdom agreed to spend and invest $450 billion in the United States. This is a record amount of money. It will create hundreds of thousands of jobs, tremendous economic development, and much additional wealth for the United States.
...
The crime against Jamal Khashoggi was a terrible one, and one that our country does not condone. Indeed, we have taken strong action against those already known to have participated in the murder. After great independent research, we now know many details of this horrible crime. We have already sanctioned 17 Saudis known to have been involved in the murder of Mr. Khashoggi, and the disposal of his body.
...
King Salman and Crown Prince Mohammad bin Salman vigorously deny any knowledge of the planning or execution of the murder of Mr. Khashoggi. Our intelligence agencies continue to assess all information, but it could very well be that the Crown Prince had knowledge of this tragic event – maybe he did and maybe he didn’t!
...
In any case, our relationship is with the Kingdom of Saudi Arabia. They have been a great ally in our very important fight against Iran. The United States intends to remain a steadfast partner of Saudi Arabia to ensure the interests of our country, Israel and all other partners in the region. It is our paramount goal to fully eliminate the threat of terrorism throughout the world!"
Snippets from the Right
Trump's mealy-mouthed statement on the Jamal Khashoggi murder is actually prudent
Washington Examiner
"President Trump was right to make a deliberately blurry finding on Saudi Crown Prince Mohammed bin Salman's culpability for the Oct. 2 murder of Saudi dissident, Jamal Khashoggi at the Saudi consulate in Istanbul, Turkey.
...
The key here is that while Khashoggi's murder was a foul atrocity that shames bin Salman and Saudi Arabia, it is in the U.S. interest that the murder not seriously damage the U.S.-Saudi relationship. And were Trump to directly blame bin Salman, it would cause a major rupture in U.S.-Saudi relations and the likely realignment of Saudi foreign policy away from America and towards Russia.
Trump recognizes this. While Trump's statement pays undue attention to Saudi arms purchases from the U.S., it also explicitly identifies America's Middle Eastern balance of power interest in constraining Iran, and bin Salman's effort to strengthen regional counter-terrorism efforts against groups like al Qaeda and ISIS.
...
Ultimately, Trump's choice here was between risking American security and directly recognizing the brutal murder of a decent man. And in the cause of realism...Trump has made the right choice."
Snippets from the Left
Trump slanders Khashoggi and betrays American values
Washington Post
"PRESIDENT TRUMP on Tuesday confirmed what his administration has been signaling all along: It will stand behind Saudi Crown Prince Mohammed bin Salman even if he ordered the brutal murder and dismemberment of journalist Jamal Khashoggi. In a crude statement punctuated with exclamation points, Mr. Trump sidestepped a CIA finding that the crown prince was behind the killing; casually slandered Mr. Khashoggi, who was one of the Arab world’s most distinguished journalists; and repeated gross falsehoods and exaggerations about the benefits of the U.S. alliance with the kingdom.
...
As with Russian President Vladi­mir Putin’s interference in the 2016 election, Mr. Trump is justifying his affinity for a brutal and reckless leader by disregarding the findings of the U.S. intelligence community. The Post reported Friday that the CIA has concluded with 'high confidence' — a rating it does not apply lightly — that Mohammed bin Salman ordered the murder of Mr. Khashoggi, who while living in self-imposed exile in Virginia, wrote columns for The Post that were moderately critical of the crown prince.
...
Mr. Trump bases his continued backing for the regime on false claims, including his thoroughly debunked boast that Saudi Arabia will 'spend and invest $450 billion' in the United States. He says the kingdom has 'been very responsive to my requests to keeping oil prices at reasonable levels,' though Riyadh is reportedly preparing to cut production to raise prices.
...
Mr. Trump concluded his statement by inviting Congress 'to go in a different direction.' As in the Russia case, it must do so... The alternative is a world where dictators know they can murder their critics and suffer no consequences."
Discover more on this topic on AllSides.
Middle East, Saudi Arabia, Donald Trump, Jamal Khashoggi, Mohammed Bin Salman, Story Of The Week, News