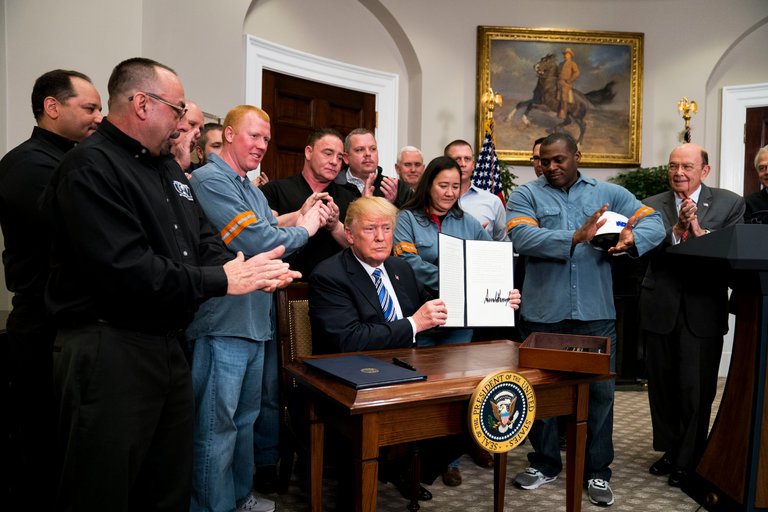 President Trump officially announced new tariffs on steel and aluminum, exempting Mexico and Canada. Critics argue this could spark a trade war, while some in favor say that this is part of his 'America First' agenda. The plan also has unlikely supporters in large unions and some Democrats who contend that the tariffs will level the playing field between the U.S. and outside competitors like China. However, in general, his decision has drawn bipartisan opposition from Congress and the media.
Other news from AllSides:
Snippets from the Left
Trump Authorizes Tariffs in Defiance of Allies at Home and Abroad
The New York Times
"President Trump defied opposition from his own party and protests from overseas on Thursday as he signed an order imposing stiff and sweeping new tariffs on imported steel and aluminum. But he sought to soften the impact on America’s closest allies with a more flexible plan than originally envisioned.
After a week of furious lobbying and a burst of last-minute internal debates and confusion, Mr. Trump agreed to exempt, for now, Canada and Mexico and held out the possibility of later excluding allies such as Australia. But the order, which would go into effect in 15 days, could hit South Korea, China, Japan, Germany, Turkey and Brazil and foreign leaders warned of a trade war that could escalate to other industries and be aimed at American goods.
...
More than 100 Republican lawmakers sent a letter to Mr. Trump on Wednesday imploring him to drop plans for sweeping tariffs, which would upend years of free-trade orthodoxy among party leaders in Washington and potentially prompt retaliation and a wider trade war with other countries. Their letter came a day after Mr. Trump’s chief economic adviser, Gary D. Cohn, announced his resignation after his failure to forestall the president from pursuing tariffs."
Snippets from the Center
Trump Signs Metals Tariffs Sparing Some Allies
Wall Street Journal
"When Mr. Trump and aides first announced plans a week ago to impose tariffs of 25% on steel and 10% on aluminum imports, they said in the following days that those numbers were fixed and that no countries would be excluded. The goal, they said, was to give hard-hit domestic producers sufficient protection from foreign competition to ensure their long-term health, a condition the White House deems vital for American national security.
But both Mr. Trump and a senior administration official, speaking Thursday morning ahead of the3:30 p.m. announcement, indicated that the planned tariff policy had evolved significantly during fierce internal debates over the past few days, as well as warnings from close military allies that blocking their exports could undermine their relations with the U.S."
Snippets from the Right
Trump tariffs blur lines between allies and enemies, European Central Bank says
Washington Examiner
"The immediate impact of President Trump’s tariffs on steel and aluminum won’t be that large, said European Central Bank President Mario Draghi. Their effect on foreign relations is another matter.
...
The U.S. Federal Reserve, which grew its own balance sheet to $4.5 trillion with a similar strategy, has begun allowing it to shrink as conditions improved in the world’s largest economy.
Now, however, some members of Congress and Wall Street money managers are concerned that such economic gains may be imperiled by Trump’s plan to impose tariffs of 25 percent on steel imports and 10 percent on aluminum imports.
...
If the tariffs do spark a trade war, it could halt the economic momentum achieved through the GOP’s December tax cuts and Trump’s efforts to loosen regulations, the U.S. Chamber of Commerce has warned."
Discover more on this topic on AllSides.
Tags:
Trade
tariffs
Donald Trump
Story of the Week
News

END_OF_DOCUMENT_TOKEN_TO_BE_REPLACED
Go ad-free!   About these ads