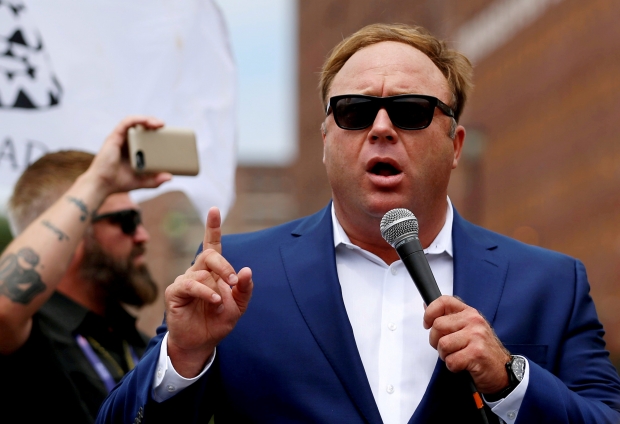 Facebook, Apple, Youtube, and Spotify have all banned conspiracy theorist Alex Jones of Infowars, citing hate speech violations. Although Twitter CEO Jack Dorsey originally stated that the platform would not censor Jones' content, the company also removed several of his videos and tweets after a CNN article found them to be in violation of Twitter's standards. Supporters of the decision say that Jones' content incites violence against marginalized groups, while opponents claim that the tech companies are prejudiced against conservative speech.
Check out some other big stories this week: Paul Manafort's Former Business Partner Testifies that the Two Committed Tax and Bank Fraud, New York Times Faces Criticism for Hiring Sarah Jeong, a Writer With a History of Anti-White Tweets, and CNN's Jim Acosta and White House Press Secretary Sarah Sanders Clash.
Snippets from the Left
Farewell, Infowars. You won’t be missed.
Washington Post
"The First Amendment states that 'Congress shall make no law . . . abridging the freedom of speech.' That’s it. It does not say that private companies are required to host your speech on their platforms, or that they must promote your content. You can say what you like, but no one else is obliged to help you get your message out.
...
When it comes down to it, false statements and purposeful conspiracy-mongering cause public harm. Often, a lot of harm. In December 2016, a man shot up the Comet Ping Pong pizzeria in Washington following a rumor, amplified by Jones, that it was hosting a pedophile ring. Parents of children murdered at Sandy Hook Elementary School can’t visit their children’s graves because they are hounded by Infowars-inspired harassers. In June, an armed man in an armored vehicle barricaded himself near the Hoover Dam in support of QAnon, only the latest of the cockeyed theories that Jones has promoted.
...
Still, there’s likely to be further fallout from Facebook, Apple and YouTube’s decisions. It’s possible the deplatforming of Jones will further excite those who claim that speech is being silenced, or who are looking for more evidence of “deep state” intervention. Of course, that would have happened anyway — conspiracists gonna conspire, after all.
Snippets from the Center
Apple, Other Tech Firms Remove Links to Infowars Content
Wall Street Journal
"Eliminating easy access to Infowars podcasts marks a rare, prominent foray for Apple into an issue confronting many major internet companies: how to remove hateful or conspiratorial messages from their platforms without infringing on free speech.
...
Infowars, a site that frequently promotes conspiracy theories, and its host Alex Jones have often been at the center of the debate over controversial content. In July, Facebook banned Mr. Jones from its platform for 30 days for posting comments that violated policies governing hate speech and bullying.
...
The tech giant 'does not tolerate hate speech' and has 'clear guidelines that creators and developers must follow to ensure we provide a safe environment for all of our users,' Apple said in a statement. 'We believe in representing a wide range of views, so long as people are respectful to those with differing opinions.'"
Snippets from the Right
Alex Jones winning: He's now more popular than ever
Washington Times
"He’s well on his way to becoming a martyr — meaning, many of those who don’t even like his content or appreciate his style are gearing up, nevertheless, to defend his right to speak on these social media stations.
This seems counterproductive to those who would silence him, yes? Google “Jones” and what appears is a page filled with Alex Jones news. It’s not just free advertising for Infowars; it’s turning Jones himself into the cause celebre of the conservatives’ censorship fight.
...
Good for him. That’s not just the capitalistic way. It’s the classic way of getting back at one’s enemies. Rather than going away, Jones is growing larger.
...
No doubt the tech giants and social media executives meant to silence Jones and make him go away. But what they’ve done instead is made him even more noticeable, more influential, more pertinent in today’s news cycles.
They’ve pretty much made him a martyr of the free speech movement."
Discover more on this topic on AllSides.
Technology, Alex Jones, Infowars, Facebook, YouTube, Apple, Spotify, Story Of The Week, News