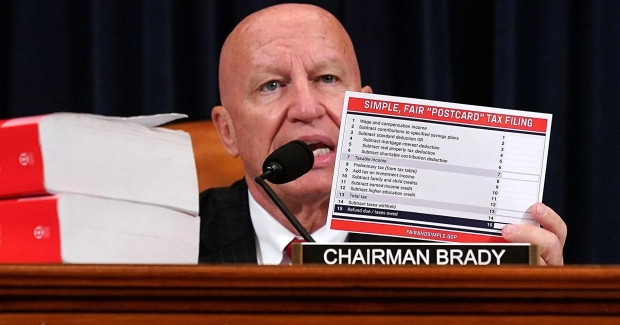 Today, the GOP proposed tax bill passed the House of Representatives with a vote of 227-205.House Speaker Paul Ryan called it the "single biggest thing we can do to grow the economy" and touted the fact that this is the first time since 1986 the tax bill has been rewritten, showing the strength of the status quo. However, no Democrats voted for the bill, 13 Republicans opposed it, and 400 millionaires across the country came out against the bill even though they will presumably benefit from tax cuts. The bill now heads to the Senate where it remains unclear what the vote will be. The tax bill had recently been combined with a repeal of the Affordable Care Act after several unsuccessful attempts to dismantle the ACA on it's own.
Other news from AllSides:
Snippets from the Left
House passes GOP tax bill, upping pressure on struggling Senate effort
Washington Post
"Trump and Republican leaders in Congress are aiming to pass a bill that would cut taxes by as much as $1.5 trillion by the end of the year. Both the House and Senate bills deliver the majority of the cuts to businesses and wealthy Americans, but there are significant differences between the bills that will have to be resolved.
...
Trump and GOP leaders have long claimed that their plan will create economic growth that will offset the bill’s $1.5 trillion revenue cut, negating any long-term impact on the national debt.
House Ways and Means Committee Chairman Kevin Brady (R-Tex.) told reporters last month that 'dynamic scores' of the tax plan, taking economic growth into account, would be available before a floor vote. But neither the Joint Committee on Taxation nor the Trump administration has released any analysis showing whether the GOP’s economic claims are viable."
Snippets from the Right
House passes Republican tax bill, future in Senate unclear
Fox News
"House Speaker Paul Ryan celebrated the passage, calling it 'nothing short of extraordinary.'
'This country has not rewritten its tax code since 1986,' Ryan said on Capitol Hill, surrounded by Republican lawmakers. 'The powers of status quo in this town are so strong, yet 227 men and women of this Congress broke through that today.'
The White House in a statement called the bill’s passage a “big step toward fulfilling our promise to deliver historic tax cuts for the American people by the end of the year.”
...
The Senate version, which is working its way through the Finance Committee this week, is facing a lot of obstacles, including pushback from GOP senators. Sen. Ron Johnson, R-Wis., announced his opposition Wednesday to the GOP's tax bill. GOP Sens. Susan Collins of Maine, Jeff Flake of Arizona and Bob Corker of Tennessee have expressed concerns about the bill but have not signaled which way they would vote."
Snippets from the Center
House passes sweeping tax bill in huge victory for GOP
The Hill
"The measure was approved by a vote of 227-205. No Democrats voted for the bill, while 13 Republicans broke ranks to oppose it.
'Passing this bill is the single biggest thing we can do to grow the economy, to restore opportunity and help these middle-income families who are struggling,' Speaker Paul Ryan (R-Wis.) said ahead of the vote.
Once the bill reached the magic number for passage, Republicans in the chamber erupted into applause.
Democrats mockingly joined in, with some singing 'na na na na, hey hey, goodbye,' like they did when the chamber passed an ObamaCare repeal bill earlier this year.
Besides Rep. Walter Jones (R-N.C.), who had concerns about the bill's impact on the debt, all of the GOP no votes came from the states of New York, New Jersey and California."
Discover more on this topic on AllSides.
Taxes, House Of Representatives, GOP, Story Of The Week, News