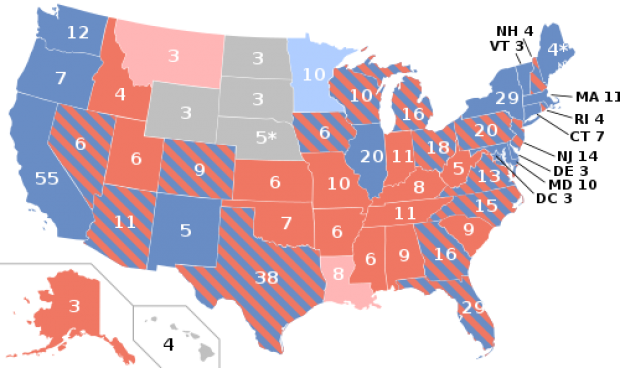 Contradictory media coverage is never more apparent than in an election year, and the biases on each side of the news spectrum get stronger the closer we get to November. This is a season when even the “hard numbers” of polling statistics are described in strikingly different ways, as we found a number of times this week. The contrasts start as high up as the headline itself, and go deeper from there, as you’ll see in our snippets today and in the coverage we’ve curated on yesterday’s National Security Forum.
But first, we’re excited to tell you about our new partnership with the Christian Science Monitor. We are supporting their new "Politics of US" weekly series which aims to increase our understanding of polarizing issues and our respect for people with differing views. This aligns perfectly with AllSides. Check out their first topic, Guns, which utilizes several of our new features.
See other news featured by AllSides such as Analysis of National Security Forum, Nine Weeks Out, Race Near Even, Labor Day 2016 and the latest AllSides News.
Snippets from the Left
The swing state math still looks terrible for Donald Trump
Vox
“With about two months left in the campaign, the national race between Hillary Clinton and Donald Trump has gotten closer, but Clinton still appears to be solidly ahead in more than enough swing states to deliver her the presidency.
Yes, the race seems to have tightened since Clinton’s peak in the early August post-convention period…
But current polling averages for both RealClearPolitics and HuffPost Pollster do still show Clinton leading Donald Trump in almost every traditional swing state. Furthermore, Clinton remains not only ahead but pretty comfortably ahead in states that would be enough to provide her with a majority of electoral college votes.”
Snippets from the Right
Swing State Polls: All Tied Up in Battlegrounds, Including...Texas?
Townhall
“The same batch of data has Trump up three in Ohio, tied in North Carolina, tied in Georgia, and clinging to a two-point lead in Mississippi.  Feel free to read all about this massive poll of 75,000 voters across all 50 states here, but basic common sense dictates that if Trump is really leading in Ohio, and has closed a wide gap in places like Wisconsin and Colorado, he is...not trailing by a point in Texas.  That's not possible and it doesn't remotely align with other evidence.  Conversely, if he's genuinely battling Hillary Clinton to an approximate draw in Mississippi and is in danger of dropping Arizona and Georgia, he cannot be competitive in Michigan and Florida.  There are data points in this poll that point to a very competitive race in which Donald Trump may be able to pull out a win (although its results out of Nevada, Pennsylvania and Virginia present significant hurdles).”
Snippets from the Center
Will Trump or Clinton win? The 11 states deciding the race
The Hill
“A new CNN/ORC poll on Tuesday morning showed Trump leading by 2 points nationally, sending shockwaves through Democratic ranks. Clinton’s advantage in the RealClearPolitics polling average was down to 3.3 points, less than half of what it was at its peak.
For all that, however, the Democratic nominee remains the favorite to win the White House — in part because of her strength in the battleground states that will decide the election.
Clinton has succeeded in making some Republican redoubts competitive, including Georgia and Arizona. But the election will come down to the same states that have decided most recent presidential contests.”
Discover more on this topic on AllSides.
Story Of The Week, News, Polls