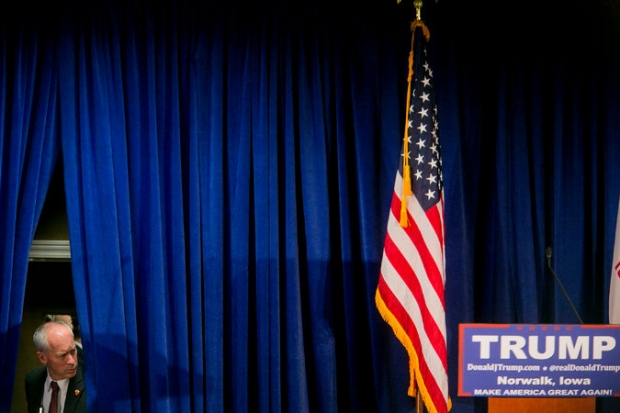 Front-running GOP candidate Donald Trump not only pulled out of the debate this week after Fox News refused to remove Megyn Kelly as a moderator, he also quickly announced a competing event of his own.
Was this a smart campaign move on Trump’s part or will it hurt him? Who will suffer more as a result: Trump, Fox News, or Trump’s opponents? As this issue is personal to Fox News, we decided we needed to do something unique and bring you two different viewpoints from the Right today in addition to snippets from the Center and Left.
See other news featured by AllSides such as Planned Parenthood Filmmakers Indicted, SOTU and Polarization, Inmates Escape from CA Jail and the latest AllSides News.
Snippets from the Right
OPINION: Donald Trump can't bear to have anyone question his record. That's why he won't debate
Fox News
It seems pretty clear that Trump does not like taking questions about his prior record and past statements.  That is the gist of his rage against Megyn Kelly.  She had the audacity to ask him not about what he will do, but about what he had done and said.  Trump knows his record is his biggest weakness.
Since Trump announced last summer, few in the media have dared review Trump’s record.  His record is a Democrat funder who supports socialized medicine like Bernie Sanders, gay rights, abortion rights, open borders, high taxes, and gun control.  Only recently and opportunistically has he pivoted on most of those issues.
Megyn Kelly dared ask him about his prior statements on women.  He no doubt fears this time she will ask him about his prior positions...
Snippets from the (Opposing) Right
OPINION: The GOP Establishment Has As Much To Lose As Donald Trump If He Boycotts
TheBlaze
But if Trump does go through with his debate boycott and still wins Iowa on Monday then he will have broken the strangle-hold of the GOP establishment and banished an entire entrenched class to the ash-bin of irrelevancy, at least for this election cycle. It is as if Trump watched the Seinfeld episode where George Costanza does the opposite of every traditional impulse he ever had and soars to new heights of social and career success.
One also gets the feeling that, deep down, some in the conservative movement would rather see Hillary win, than lose their lifestyles and power.
If Trump wins Iowa without a debate appearance, the conservative establishment may even have to take down their signs that read: “All conservatives are equal…but some are more equal than others.”
Snippets from the Left
OPINION: Note to Networks: Bump Trump, Cover Debate
Huffington Post
On Wednesday afternoon, U.S. Senator John McCain (R-AZ), a two-time presidential candidate, was asked on CNN what he thought of Donald Trump refusing to participate in Thursday night's presidential debate. His first answer went as follows:
"Anyone who is running for office and gets to pick who the moderator is, that's the destruction of free press as we know it."
Of course McCain is right. And of course FOX NEWS is rightly backing up Megyn Kelly, the original target of Trump's baseless complaints, and going ahead with the debate.
…
So if U.S. veterans like McCain and Rieckhoff -- who fight for their fellow veterans all the time -- can take a stand on principle and give the straight-arm to what is clearly another contrived Trump publicity stunt, can't a group of television journalists take a stand, too?
Snippets from the Center
6 Questions Ahead Of The Trump-Fox Split-Screen 'Squirmish'
NPR
There's some risk for Trump in not going to the debate. He can look presumptuous, entitled and untouchable. Maybe he really is the "Teflon Don" of this race. It's certainly not what a typical front-runner would do. That candidate would play it safe, have a good debate and position himself to win the first two contests.
…
Some candidate might figure out a way to use Trump's absence as an opportunity. But the likelihood, again, is Trump will spin this into a win, as the other candidates are forced to participate in a game without the star player whom everyone came to see.
Discover more on this topic on AllSides.
News, Donald Trump, Debate, Fox News