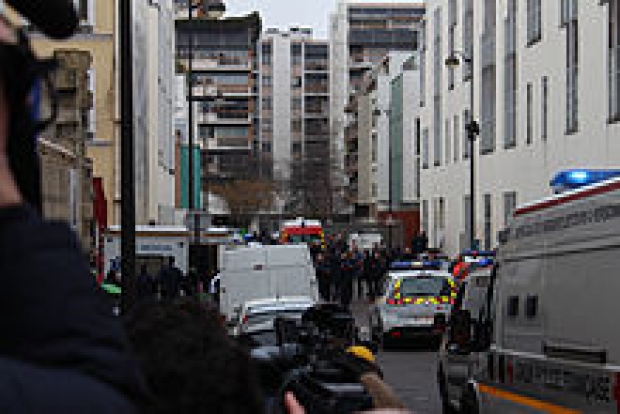 After the shocking terrorist attack at the French satirical magazine, Charlie Hebdo, an intense manhunt continued today. In addition, crowds gathered worldwide in support of the victims and we are seeing a range of reaction across the media spectrum. Different journalists and outlets chose to emphasize different viewpoints.
Snippets from the Left
Muslims Around The World Condemn Charlie Hebdo Attack
Huffington Post
"Muslim leaders and activists immediately denounced the terrorists actions, reiterating the verse in the Quran that tells Muslims when one kills just one innocent person, it is as if he has killed all of humanity.
The Grand Mosque of Paris, one of the largest in France, issued a statement on its website shortly after the attacks, saying its community was "shocked" and "horrified" by the violence.
…Countless Muslim activists, leaders and authors took to social media Wednesday to express horror and dismay at the attack..."
Snippets from the Right
Opinion: Will we ever learn? Obama White House can't admit Paris attacks 'Islamic terrorism'
Fox News
"Phrasing the problem of “violent extremism,” as the Obama administration has done repeatedly, of being a problem exclusively of only Al Qaeda and now ISIS, is intellectually spurious and truly dangerous to our national security.
Indeed, the responses from our own president, French President Hollande and British Prime Minster David Cameron all spouted the same empty pabulum in asserting that the Paris attack had nothing to do with Islam or any religion for that matter. But the hollow comments coming from our own leaders are steeped in the stench of appeasement and cowardice."
Snippets from the Center
Opinion: Charlie Hebdo goes on, and that matters
USA Today
"Charlie Hebdo stirred up controversy with its irreverent, sometimes crass take on the world. It particularly offended Muslims with its treatment of the prophet Mohammed.
Extremist zealots, not known for their senses of humor, hope to control the conversation through fear. Whether it's shooting up up Paris newspaper offices, beheading journalists in the Middle East or ruthlessly and relentlessly persecuting reporters and editors in despot-ruled nations. the goal is the same: Kill the messengers and make the message go away.
But it can't."
Discover more on this topic on AllSides.
- John and the AllSides team
Paris, Terrorism, News