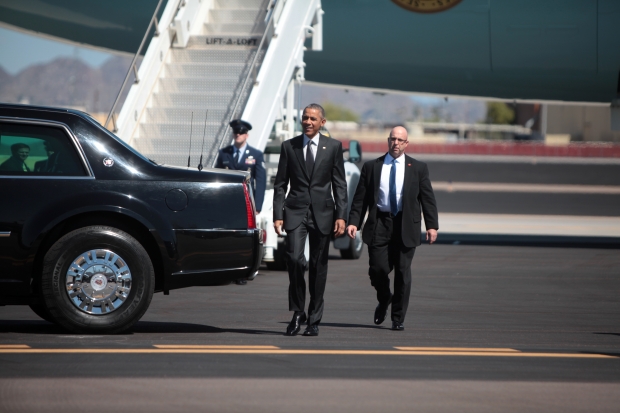 On Earth Day this week, President Obama gave a talk in the Florida Everglades about climate change, declaring it an imminent threat to the planet and to Florida's economy. The President has been calling for laws to control greenhouse gases and carbon pollution amid support from the Left that believes climate change to be one of the most dire issues of our time. Many conservatives either question climate change or see those laws as harmful to the economy while having little if any positive effect on the overall climate.

Snippets from the Right
The Insiders: Obama's global warming distraction
Washington Post
"President Obama is living in a world of denial.  He uses global warming as a distraction to dodge the real problems we face and avoid critiques of his performance.  If he did face reality, there is a lot he could do to try and juice economic growth.  There is also a lot he could do to take the reins and provide American leadership around the world.  He could deploy artful diplomacy to help us through some of the critical problems that the likes of Graham Allison, Larry Summers and Doug Holtz-Eakin have articulated. It may take a crisis to get the president’s attention, but let’s hope somewhere there are advisers telling him that urgent matters need his focus and global warming is simply not the priority that he wants it to be. America urgently needs the president to be the leader that the world needs today."
Snippets from the Left
Obama Just Called Out Florida's Climate Deniers in Their Own Backyard
Mother Jones
"The choice of venue was appropriate from an environmental perspective—the Everglades is already acutely feeling the impacts of sea level rise—but it was also telling from a political standpoint.
...
Florida is home not just to Senator Marco Rubio, a GOP presidential contender who maintains that humans can't affect the climate, but also to Governor Rick Scott, who landed in headlines last month after apparently barring state employees from talking about climate change.
"Climate change can no longer be denied," Obama said today. 'It can't be edited out. It can't be omitted from the conversation... Simply refusing to say the words 'climate change' doesn't mean climate change isn't happening.'"
Snippets from the Center
In Florida's Everglades, Obama wades into climate change politics
Reuters
"'Climate change is threatening this treasure and the communities that depend on it," Obama said in a speech to a small crowd at the park's welcome center. "If we don't act, there may not be an Everglades as we know it.'
With less than two years left in his presidency, Obama hopes to make addressing climate change one of his legacy accomplishments. He wants to finalize rules to curb greenhouse gas emissions from power plants and marshal support for a global deal this year to limit carbon pollution.
With climate shaping up as an issue in the 2016 presidential campaign, the trip also gave Obama a chance to draw a contrast with Republicans who want to overhaul his proposed regulations."
Discover more on this topic on AllSides.
Climate Change, Barack Obama, Earth Day, News