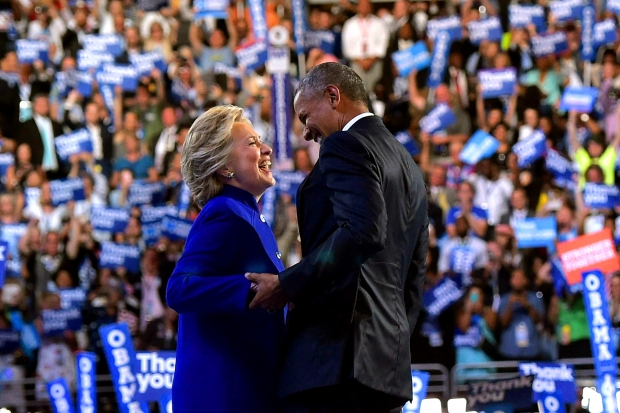 If you were an alien dropped from outer space to the U.S. last week and you watched the Republican and Democratic National Conventions, you might assume these conventions have been discussing two different countries entirely. You might even decide there are two different Donald Trumps and Hillary Clintons, based on how the two camps describe each other. As we did last week for the GOP convention, this week we bring you some contrasting coverage of the 2016 DNC.
Want to discuss the issues facing America with a panel of top opinion leaders- but without the divisiveness you saw at the conventions? Join us online at the American Citizens Summit startingMonday August 1st lasting until Thursday the 4th. This online event features leaders and organizations around the nation, building bridges across partisan divides for a more effective democracy. I'll be speaking at the Politics, Civics and Technology session, while others, from Grover Norquist (conservative president of Americans for Tax Reform) to Joan Blades (liberal co-founder of MoveOn.org) will cover a vast array of topics. Sign up for this FREE online event.
See other news featured by AllSides such as Obama Talks Hillary’s Experience, Bill Clinton Speaks for Hillary, Highlights from DNC Night 1 and the latest AllSides News.
Snippets from the Left
OPINION: The Clear and Present Danger of Donald Trump
The New York Times
"Every living person who has held the office of the presidency – three Democrats and two Republicans, spanning 32 years in the White House – views Trump as unfit to hold it. Were he to win, the country could enter a period of instability few of us have known. The third night of the Democratic convention was the night that the party tried to raise the level of alarm about the Trump danger. It wasn’t just Obama. Joe Biden delivered a withering attack on Mr. Trump as a sadist who enjoys nothing so much as firing other human beings. John Hutson, a retired Navy admiral, noted that more than 120 Republican foreign-policy experts recently said Mr. Trump would 'make America less safe.'"
Snippets from the Right
Obama passes baton to Clinton, stirs up '3rd term' charges
Fox News
"Republicans immediately fired back, with party Chairman Reince Priebus issuing a statement saying, 'Tonight reinforced that the Hillary Clinton, Tim Kaine ticket is nothing more than two career DC insiders who want nothing more than to continue the failed Democrat status quo.' ... Without question, the sitting president depends on his former secretary of state to help preserve his legacy... But Republicans point to the other side of the picture – a debt nearing $20 trillion, tensions growing in America’s cities and an Islamic State threat that even top security officials suggest is growing in its reach and unpredictability."
Snippets from the Center
Hillary Clinton's challenge: Igniting excitement
CNN
“The former Secretary of State faces four formidable challenges tonight: unifying the Democratic Party at a time when many Sanders supporters insist they will not fall in line; assuaging concerns about her trustworthiness; convincing independent voters that that Trump is unfit to be commander-in-chief; and generating excitement about her own campaign during a year of intense negativity. While many Democratic delegates here in Philadelphia initially believed that Clinton would have no problem dispatching Trump, given his erratic behavior and divisive rhetoric, they said in interviews this week that they were alarmed by how close the race looks, particularly in states like Ohio, Pennsylvania and Florida.”
Discover more on this topic on AllSides.
Tags:
News
Hillary Clinton
DNC
Democratic Party