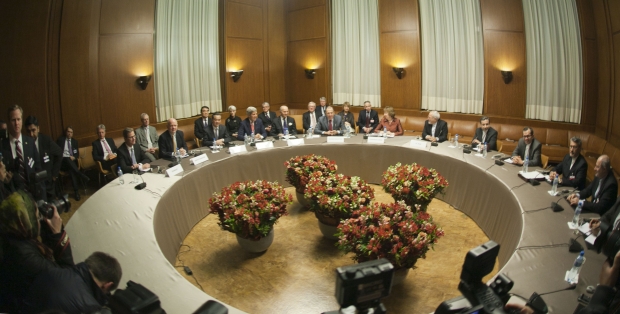 It's been an eventful week in politics with Marco Rubio and Hillary Clinton announcing their runs for president. In the midst of all the headlines about Clinton and Rubio, we also saw the White House signal that the president is ready to sign a measure giving Congress a voice on the proposed Iran nuclear accord. What does this yield mean, and why did it happen after months of resistance? These are some of the questions explored, with differing views, this week.
Snippets from the Left
Neocons’ humiliating defeat: How the hotheads lost the Senate’s Iran debate
Salon
"…Sen. Bob Corker, the chairman, and Sen. Ben Cardin, worked out a deal to bring the bill to the full chamber. It addressed each of the White House top concerns: language in the original bill that (1) prevented the Obama administration from suspending sanctions against Iran during a 60-day congressional review period and (2) required the administration to certify that 'Iran has not directly supported or carried out an act of terrorism against the United States or a United States person anywhere in the world' every 90 days. In the deal, reached late Monday night, the 60-day window would be halved to 30 and the certification would be removed. (The administration would still have to regularly report on Iran’s sponsorship of terrorism.)
The changes made the bill 'benign' enough, to use the word of Corker-Menendez skeptic Sen. Chris Murphy (D-CT), that the White House could support it."
Snippets from the Right
Unanimous: Senate Foreign Relations Defies Obama Veto Threat on Iran, 19-0
Townhall
"You'll notice that the White House has fully retreated from Obama's veto threat, suddenly announcing that the president is actually quite pleased to sign the legislation after all. Why the change of heart? First, this train was leaving the station. Rather than getting publicly humiliated by a strong front of Republicans and Democrats, Obama is "voluntarily" joining the party. (Incidentally, it's extraordinary that this man had to be dragged kicking and screaming into finally supporting legislation designed to tap the brakes on runaway executive power. He's come a long way). Second, Democrats were able to wring a few changes out of committee Republicans."
Snippets from the Center
White House willing to sign compromise Iran bill as it clears committee hurdle

"'What I'm most proud of is we've kept the pure integrity of the process in place and the President cannot lift -- while Congress is reviewing this -- cannot lift the congressionally mandated sanctions, which is what they've been trying to do and push for over the past couple of weeks,' Senate Foreign Relations Committee Chairman Bob Corker told reporters Tuesday, as he headed into a classified briefing on the emerging Iran agreement with Secretary of State John Kerry and other top administration officials.
..
House Speaker John Boehner on Tuesday said he expected the House to take up the Corker bill once the full Senate votes on it, saying the proposal has taken 'center stage.'
He reiterated his stance that Congress should 'absolutely have the opportunity to review the deal,' adding the administration 'appears to want a deal at any cost.'"
Discover more on this topic on AllSides.
Iran, US Congress, News