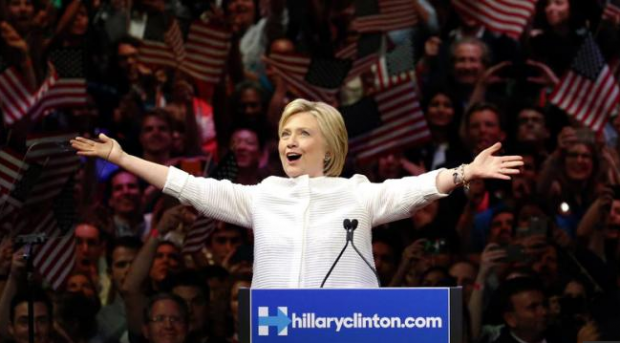 This week, after securing a majority of the pledged delegates nationwide and winning more primaries, Hillary Clinton became the first woman to be the presumptive U.S. presidential nominee of a major political party. Today, after a meeting with Senator Sanders, President Obama publicly endorsed Hillary Clinton. As these events are unfolding, we bring you a snapshot of reactions to Hillary’s nomination across the media’s political spectrum.
See other news featured by AllSides such as Sanders Stays In - For Now, Hillary Clinton Wins California, Judge Problem for Trump and the latest AllSides News.
Snippets from the Right
Hillary Clinton’s Nomination Sends a Terrible Message to Our Daughters
TheBlaze
“So if you want your daughter to sacrifice her integrity on the altar of ruthless ambition, you won’t find a better example for your little girl than Hillary. If you want her to compromise her character in order to accumulate personal wealth and accolades, Hillary sends the right message. If you want her to be vain and petty, Hillary has certainly blazed a trail that she ought to follow. If you want her to be conniving and vicious, Hillary will light the way. If you want her to pursue success at any price at all, and to destroy whoever stands in her way, and then to finally stand atop the mountain alone and bitter and vengeful and ungrateful, then look to none other than Hillary Rodham Clinton.
But if we want our daughters, first and foremost, to be honest, honorable, virtuous and decent, then we should point to Hillary as a cautionary tale, not a role model. For us, Hillary is not an example of success.”
Snippets from the Left
This Is What Making History Looks Like
Huffington Post
“Forty-four presidents have been elected in the United States over the past 228 years. Not once have voters had the option to choose a female candidate in a major party. Until this cycle.
Hillary Clinton officially became the presumptive Democratic nominee on Monday night. But it was sealed with pomp and circumstance on Tuesday. Victories in New Jersey and New Mexico, and early results from California, gave her enough pledged delegates to claim a majority…
But the numbers were a boring datapoint in an otherwise historical, emotional night. Well before the first state was called, the Clinton campaign changed her Twitter profile picture to read ‘History made’ and released a video that spotlighted the barrier she had broken. Her crowd was packed with cheering women and fathers who had brought their daughters to witness the celebratory event in Brooklyn.”
Snippets from the Center
Hillary Clinton’s Time Arrives, but Are the Times Right for Her?
Wall Street Journal - News
“…just beyond the history-making character of her candidacy, and the early fights she had to wage to earn her own spot on stage, Mrs. Clinton has taken on the look of a thoroughly conventional politician who has checked all the boxes needed to create a strong presidential-campaign resumé…
There was a time, and not so long ago, when such a resumé would have been enough to ward off pesky unconventional challengers and guarantee a respectable reception, at least within one’s own party. But 2016 isn’t such a time, and Mrs. Clinton has had to face the reality that such a resumé, for at least some voters, isn’t an asset to be burnished but a problem to be overcome.
‘I honestly believe that we are in one of the most populist eras in modern American history,’ says Mo Elleithee, a former Democratic Party official and Clinton supporter who now is executive director of the Institute of Politics and Public Service at Georgetown University. ‘The old left-right paradigm is gone, and it doesn’t exist outside of the’ New York-Washington axis.”
Discover more on this topic on AllSides.
News, Hillary Clinton, Election: Presidential