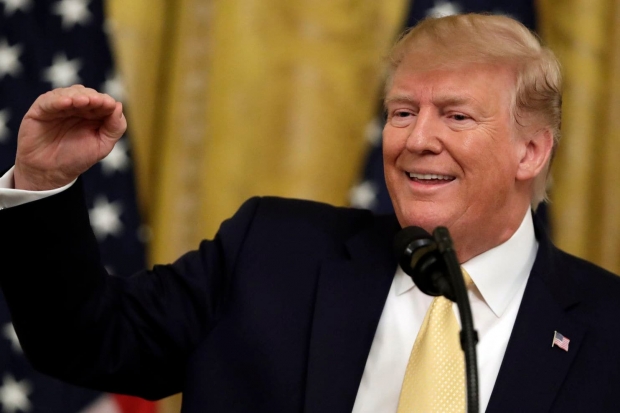 The 'Social Media Summit' hosted by President Donald Trump at the White House on Thursday made headlines throughout the country, prompting a wide variation of coverage and reactions.

The summit hosted nearly 200 guests, many from conservative or right-leaning websites. Most outlets covering the event acknowledged that Trump invited these pundits while excluding notable social media companies. Specific descriptions of the guests varied; some voices on the left labeled the group as "right-wing extremists" or "conservative activists", and some on the right called them "far-right firebrands" or "social media provocateurs." Some left-leaning outlets ran fact-checks on Trump's summit speeches, while others on the right focused coverage on some of the event's little-known guests. James O'Keefe, founder of the corruption-exposing website Project Veritas, was an oft-mentioned attendee; some on the left referenced scandals and ethical questions surrounding O'Keefe, and some on the right drew attention to his work relating to Google's alleged anti-conservative bias.

A House Divided: Polarization and Media Bias. We've reached a state of mass intellectual isolation, and politics have become more polarized than ever. Here's why you should care.

""Trump, who regularly lashes out at the mainstream news media for their work which he brands as “fake news,” made social media a key part of his 2016 run for office as well as his 2020 reelection campaign. But he and other Republicans have long claimed that online platforms employ tactics to silence their voices, allegations that major social media companies have denied."

"Dozens of pro-Trump online personalities convened in the stately East Room to discuss what they say is censorship on social media platforms, rubbing elbows with several members of Trump’s cabinet and his White House team, and his son Donald Trump, Jr."

"The president used the event to air grievances over his treatment by Big Tech, but also to praise some of the most caustic voices on the right, who help energize Trump’s political base. “Some of you guys are out there,” he told them. “I mean it’s genius, but it’s bad.”"

"Trump singled out for praise James O’Keefe, the right-wing activist whose Project Veritas organization once tried to plant a false story in The Washington Post. In May 2010, O’Keefe and three others pleaded guilty in federal court to a misdemeanor in a scheme in which they posed as telephone repairmen in Sen. Mary Landrieu’s New Orleans district office."

"Mr. Trump acknowledged that social media had enabled him and others in the room to gain large followings, and signaled he understood that some pro-Trump content could cross a line."

"Several analysts doubted any concrete action would come of the summit, seeing it more as a way for Mr. Trump to fire up his base. A 1996 law protects internet services that host third-party speech from liability for content, and proposals to remove that protection are unlikely to win support in Congress soon."

"Trump spoke at length about what he falsely suggested was a deliberate attempt by social media companies to prevent him from gaining followers, alleging that "a lot of bad things are happening.""

"Trump said it used to take him a mere "short number of days" to gain 100,000 new followers, but it now takes "10 times as long" even though, he claimed, his personal brand is "much hotter" than it was when he was gaining followers more quickly."

"Democratic lawmakers and watchdog groups said they were most alarmed that Trump had invited supporters who have a history of targeting the president’s political opponents with inflammatory tweets, misleading videos and hard-to-debunk conspiracy theories. At one point, the president praised James O’Keefe, the founder of Project Veritas, which has released widely criticized, highly edited videos of his subjects."

"The Southern Poverty Law Center charged that the president is “essentially conducting a hate summit at the White House,” said Heidi Beirich, the director of the group’s work to track online extremism."

"With a captive audience crammed into the East Room of the White House, the president took the opportunity to bash tech companies, highlight his poll numbers, personally commend Project Veritas provocateur James O’Keefe, mistakenly say that Arnold Schwarzenegger is dead while referencing a canceled TV show, and — like any good Twitter user — complain that he’s not getting retweets like he used to."

"Trump asserted that the complex issue of Israel’s Golan Heights — the subject of political meetings and summits for 50 years — was, in fact, fixed by a tweet he fired off during a visit."

"Conservative talk show host Bill Mitchell tweeted he was attending the event, as did Jim Hoft, the founder of the website Gateway Pundit, and an anonymous Twitter user named "eDoCarpnktum," who has made pro-Trump memes and had more than 100,000 followers. Charlie Kirk and Benny Johnson of the pro-Trump millennial organization Turning Point USA also attended."

"Shortly before the summit took place, Twitter experienced an outage, which prevented some users from being able to use the service. Twitter CEO Jack Dorsey, around the same time, announced plans for the company to experiment with a new feature allowing people to hide replies to their tweets."

"“Some of you are extraordinary. The crap you think of is unbelievable,” Trump said during a White House social media summit, which included conservative personalities like Project Veritas’ James O’Keefe and Republican Rep. Matt Gaetz of Florida. The president also criticized Facebook for expressing “terrible bias.”"

"“This has the appearance not of a social media summit but a political rally and call for the right,” Democratic Sen. Mark Warner of Virginia told reporters. He called it “absurd” that people like O’Keefe and other pundits, who get retweeted thousands of times, can be invited to the White House and complain about bias."

""Sebastian Gorka, a former adviser to Trump, was sitting near the front row with several social media provocateurs during Trump’s announcement about the census while the White House press corps was forced to the back of the garden. After Trump’s speech, one of the attendees sarcastically told Playboy correspondent Brian Karem, who was with the White House press corps, “don’t be sad.”"

"Karem responded, telling the attendees of the Social Media Summit that they are people “eager for demonic possession,” video of the incident shows."