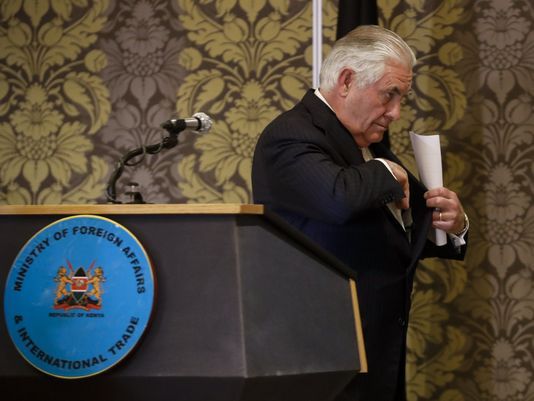 President Trump ousted Rex Tillerson as Secretary of State, announcing that CIA director Mike Pompeo would be his replacement. Some speculate that he was fired over disagreements related to Russia, while others posit that Trump wanted someone who would take harsher stances on Iran and North Korea.
Other news from AllSides:
Snippets from the Center
Why Secretary of State Rex Tillerson was fired now and what it means for North Korea talks
USA TODAY
"Secretary of State Rex Tillerson was fired via Twitter after returning from an Africa trip during which he was out of the loop on North Korean talks and contradicted the White House position on Russia's responsibility for poisoning a former double agent in the United Kingdom.
...
Trump is heading into an unprecedented face-to-face meeting with North Korea's Kim Jong Un over that country's nuclear program. The timing of Tillerson's dismissal was designed to allow Trump to put a new team in place before those talks, a White House official said on condition of anonymity to discuss a personnel decision.
Trump's nominee to replace Tillerson is CIA Director Mike Pompeo, whose hard-line stances on Iran and North Korea are closer to Trump's.
Trump conceded Tuesday that he and Tillerson often were not on the same page. 'I actually got along well with Rex, but really, it was a different mind-set. It was a different thinking.
'With Mike Pompeo,' he said, 'we have a similar thought process.'"
Snippets from the Left
Rex Tillerson Gets Fired the Day After He Criticized Russia
The New Yorker
"On Monday, Rex Tillerson, the departing Secretary of State, cut short a visit to Africa to fly back to Washington. Before he left, he remarked that the nerve-gas attack recently carried out on a former Russian spy in Salisbury, England, was a 'really egregious act,' but he also said it wasn’t entirely clear who was responsible. Later on Monday, though, the State Department issued a statement in which Tillerson expressed his 'full confidence' in the British government’s assessment that the Russian state was almost certainly the culprit.
...
This was arguably the strongest condemnation of Russian behavior that the Trump Administration has ever issued. And it turned out to be one of Tillerson’s final official acts as Secretary of State. At8:44 a.m. on Tuesday, Donald Trump announced Tillerson’s firing on Twitter.
...
It is certainly true that Tillerson’s departure wasn’t entirely unexpected. Although he has avoided criticizing Trump publicly, behind the scenes the former ExxonMobil C.E.O. hasn’t hidden his contempt for the President. Last summer, after Trump gave a wacko speech to the Boy Scouts of America, an organization Tillerson used to lead, Tillerson reportedly came close to resigning.
...
After those revelations, which Tillerson didn’t explicitly deny, there were frequent suggestions that Trump was considering replacing him with Pompeo, a former Republican congressman. Despite this acrimony, the fact remains that Trump announced Tillerson’s firing barely twelve hours after he had forcefully sided with the British government against the Kremlin. Either Trump decided that Tillerson’s show of defiance was the last straw, or he was oblivious (or indifferent) to the impression that firing him at this juncture would create."
Snippets from the Right
Tillerson’s Firing Likely Unrelated to Russia
National Review
"Popularly on social media, and even among a few foreign-policy mandarins, I’ve seen the theory floated that Donald Trump may have fired Secretary of State Rex Tillerson because Tillerson suggested Russia was behind the murder of an ex spy in the United Kingdom. This seems far-fetched.
The relationship between Tillerson and Trump has been strained almost from the beginning. And rumors of Tillerson’s imminent ouster have been around since late last year. If anything, Trump’s preferred replacement, Mike Pompeo is a notable Russia hawk. And Pompeo received loads of endorsements from other Russia hawks from Lindsey Graham to Bill Kristol.
...
My own theory is that Trump feels himself settling into the job of president and empowered to have a staff to his liking."
Discover more on this topic on AllSides.
Tags:
State Department
White House
Rex Tillerson
Donald Trump
Story of the Week
News

END_OF_DOCUMENT_TOKEN_TO_BE_REPLACED
Go ad-free!   About these ads