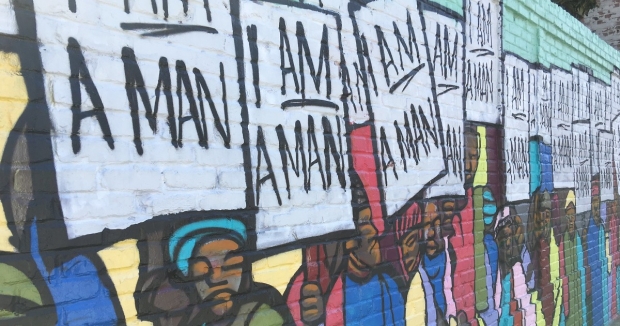 This blog was originally included in an email campaign from our friends at Braver Angels.

“Racial reckoning” is an ominous phrase.

We heard it a lot in the aftermath of the killing of George Floyd. We still hear it. It’s meant to suggest a final calling to account of society’s conscience and our political system with respect to all of its complicity with inequity and injustice. In that sense, it also carries a liberating sound to some.

But the conversation over race in America spins out from many different directions. And the contexts in which it unfolds vary in ways that we must understand. Race is not mere tinder for cable pundits to set aflame for the sake of ratings, or political candidates for the sake of votes. Whether it lies at the center of our social understanding, or stands as something that we simply can’t avoid, it is undeniably the case that righting our relationship to race is a prerequisite to our depolarizing America.

We were standing next to each other in a community meeting in Los Angeles at a school he and I both support—a school filled with black and brown kids in inner-city L.A. It was a meeting organized by the LAPD.

For Jack, talk of systemic racism is a distraction from the nuts and bolts questions of how we build good schools. What does race have to do with teaching kids how to study, giving them good examples to follow, and equipping them with skills for life? Focusing on systemic racism gives kids an excuse to give up when they could be called upon to reach their potential.

But that’s not the attitude I discovered at a Black Lives Matter chapter meeting I was invited to speak to briefly just days before. The prison system is “modern day slavery for black Americans,” a formerly incarcerated activist named Ijomba stated. “I’m an abolitionist. We need to abolish it!”

The black men in this meeting had experienced violence and abuse at the hands of law enforcement, according to their stories.

Why would I disbelieve them? Yet how also could I disbelieve the stories of young black and Latino community members who voluntary rose to tell stories of how their lives had been saved, not in the heat of violence, but in the day to day support of police officers who mentored them in community programs, introduced them to scholarship opportunities that were sending them to college, and who had dug into their own pockets to buy them new pairs of shoes when they had nothing to walk to school in?

All of these experiences are real. But they fly right past each other in the storm of our conversations over race, law enforcement, and systemic inequity more broadly in the votes- and ratings- driven economy of modern American politics.

But if you want to be a force for change in the Braver Angels way when it comes to the conversation over race in America, then I ask you to be willing to hear everyone’s stories. For perhaps it is in our stories that the true nature of both our racial problems, and their solutions, reveal themselves.

John Wood Jr. is a national leader for Better Angels, a former nominee for congress, former Vice-Chairman of the Republican Party of Los Angeles County, musical artist and a noted writer and speaker on subjects including racial and political reconciliation. He has a Center bias.