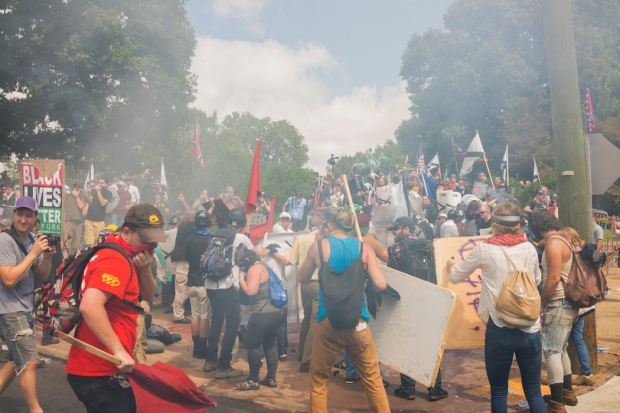 By now you have probably read about the protests in Charlottesville last Saturday that ended with 34 people wounded and 1 dead. There was a protest and counter protest focused on the removal of the Robert E. Lee statue, the Confederacy's top general. The original protest was led by a group of White Nationalists, some of whom have been identified and lost their jobs over their participation, which has led to a debate of how far freedom of speech can be taken. The President made a comment that day condemning the “egregious display of hatred, bigotry and violence on many sides” without mentioning the hate group. A day later he called out the KKK and Neo-Nazis before returning to his original stance blaming "many sides". This series of events has promptedConfederate monuments to be removed nationwide (some forcibly, others lawfully), an action which President Trump denounced in a series of tweets.
Two people on the AllSides team graduated from the University of Virginia, where the riots occurred. They both hated the violence but were also concerned about the possible repercussions to free speech. Here's what one of them, Billy Binion, wrote for the Huffington Post: A UVA Alum Weighs In On Charlottesville: Casting Out Hate With Civility.
Our newest offering for Schools - Mismatch - launching this coming Monday, August 21st. Learn more about Mismatch or sign up now!
Snippets from the Center
Trump defends monuments to pro-slavery Confederacy, inflames tensions
Reuters
"President Donald Trump on Thursday decried the removal of monuments to the pro-slavery Civil War Confederacy, echoing white nationalists and refusing to let go of a controversy that has inflamed U.S. racial tensions and threatens to further derail his policy agenda.
As a crisis deepened over Trump's response to violence last Saturday in the Virginia college town of Charlottesville arising from a white nationalist protest against the removal of a Confederate statue, the White House knocked down rumors that Trump economic adviser Gary Cohn might resign.
U.S stocks were rattled amid speculation that Cohn would quit over Trump's comments on the Charlottesville events and were down in afternoon trading. A White House official said Cohn 'intends to remain in his position' as National Economic Council director at the White House."
Snippets from the Left
The Hate He Dares Not Speak Of
New York Times
"Let’s discard the fiction that President Trump wasn’t placating white supremacists by responding so weakly to the neo-Nazi violence that killed Heather Heyer, a 32-year-old counter demonstrator in Charlottesville, Va., on Saturday. The neo-Nazis heard his message loud and clear. '
He didn’t attack us,' crowed The Daily Stormer, a white supremacist website, about Mr. Trump’s statement after the two days of racist demonstrations. 'Refused to answer a question about White Nationalists supporting him. No condemnation at all. When asked to condemn, he just walked out of the room. Really, really good. God bless him.'
...
Mr. Trump is alone in modern presidential history in his willingness to summon demons of bigotry and intolerance in service to himself."
Snippets from the Right
Charlottesville and a 'new generation of white supremacists'
Fox News
"On Monday, President Trump elaborated on his response to the violence that unfolded at the 'Unite the Right' rally on Saturday by condemning groups that cause violence in the name of racism, like 'the KKK, neo-Nazis, white [supremacists], and other hate groups.' But he also raised eyebrows by vouching for some of the Charlottesville protesters who, he said, were merely defending the memorials honoring Confederate soldiers.
...
A poster made by the organizers of Saturday's rally appears to reveal some of the organizations (though not all) that were taking part. The poster, and the rally it promoted, featured a variety of obscure symbols, flags and slogans -- all of which appear to be part of a broader effort on the part of racist groups to buck the more recognizable traditions and symbols used by older organizations like the Klan, in the ultimate hopes of attracting fresh blood to their movement."
More snippets from the Right
OPINION: Yes, 'many sides' are ripping Charlottesville, America apart
Bill O'Reilly, The Hill
"President Trump condemned the violence 'on many sides.' That quickly drew the ire of the far left as well as the media which generally despise everything the president does. The cry of false moral equivalency almost immediately filled the cable news airwaves, and the pages of liberal newspapers.
In cases where Americans are fighting other Americans, clarity is desperately needed. Trump would have been wise to articulate his anger with "many sides" in very specific terms.
...
The hard truth is that hatred is on the march in America and extremism is the reason. Social media makes it easy for troubled loons to band together and provoke confrontations. Irresponsible, agenda-driven media stokes the hate even further."
Discover more on this topic on AllSides.
Tags:
News
Story of the Week
Donald Trump
Charlottesville