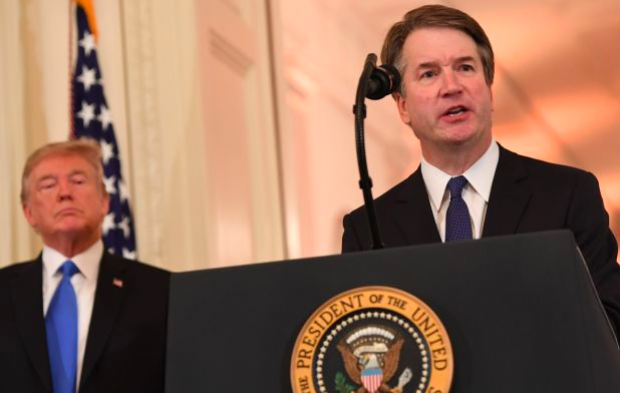 President Trump announced the nomination of Judge Brett Kavanaugh to the Supreme Court, who, if confirmed, will fill the vacancy left by Justice Anthony Kennedy's retirement. Many on the Right have praised the selection as a victory for constitutional conservatism, while some on the Left have expressed concern that he will imperil abortion and LGBT rights.
Check out some other big stories this week: NATO Summit Opens, Trump Pardons Oregon Ranchers Whose Case Sparked Wildlife Refuge Standoff, and White House Suspends Billions in Obamacare Insurer Payments.
And take a look at our infographic showing how political bias fools us.
Snippets from the Right
Kavanaugh for the Court
Wall Street Journal Editorial
"President Trump kept everyone guessing to the end about his Supreme Court selection Monday, but in nominating Brett Kavanaugh he also kept his promise to select a Justice 'who will faithfully interpret the Constitution as written.' Judge Kavanaugh has an exemplary record that suggests he will help to restore the Supreme Court to its proper, more modest role in American politics and society.
Mr. Trump stressed the 53-year-old Judge Kavanaugh’s legal credentials Monday evening, and well he should. His 12 years on the D.C. Circuit Court of Appeals includes more than 300 opinions that span nearly every significant constitutional issue including the separation of powers and federalism. The Supreme Court has adopted the logic of 11 of his opinions in whole or part. He has the experience and intellect to be a leader on the Court, not merely a predictable vote on this or that issue.
...
We firmly believe that liberals have much less to fear from a conservative majority than they imagine. A genuinely conservative Court might even help progressives by liberating them to focus once again on the core task of self-government—persuading their fellow Americans through elections, not judicial fiat."
Snippets from the Left
Brett Kavanaugh, Trump’s Supreme Court Pick, Is Probably the End of Abortion Rights and Same-Sex Marriage
Daily Beast
"When President Trump Monday nominated Judge Brett Kavanaugh to the Supreme Court, he probably doomed the right to abortion, same-sex marriage, and maybe even contraception.
But while Kavanaugh’s record on women’s and LGBT rights is sparse, it gives good reason to suspect that he could be the swing vote to strike down Roe v. Wade, the abortion-rights case. This, after all, is what Trump promised in 2016: that Roe would be 'automatically' be overturned should he be elected. And Kavanaugh has been praised by numerous right-wing organizations.
...
As for LGBT issues, Kavanaugh’s record is thin, but enough to worry LGBT activists, who fear he will limit or overturn gay people’s constitutional right to marriage. In a case anticipating the Supreme Court’s Hobby Lobby case, Kavanaugh held that the Affordable Care Act’s requirement that qualified insurance plans include contraception coverage violated the religious freedom of employers."
Snippets from the Center
Trump picks conservative judge Kavanaugh for Supreme Court
Reuters
"President Donald Trump nominated Brett Kavanaugh for the U.S. Supreme Court on Monday as he aimed to entrench its conservative control for years to come, but the federal appeals court judge faces a tough confirmation fight in the bitterly divided Senate.
...
Kavanaugh is a well-known figure in Washington and has been involved in some of the biggest controversies of the past two decades. He helped investigate Democratic former President Bill Clinton in the 1990s working for independent counsel Kenneth Starr. He was on Republican George W. Bush’s team in the contentious Florida recount fight in the 2000 presidential election, then served as a senior official in Bush’s White House.
...
The new justice can be expected to cast crucial votes on other matters of national importance including gay rights, gun control, the death penalty and voting rights. The court could also be called upon to render judgment on issues of personal significance to Trump and his administration including matters arising from Special Counsel Robert Mueller’s ongoing Russia-related investigation and several civil lawsuits pending against Trump."
Discover more on this topic on AllSides.
Supreme Court, Brett Kavanaugh, Donald Trump, LGBT Rights, Abortion, Story Of The Week, News