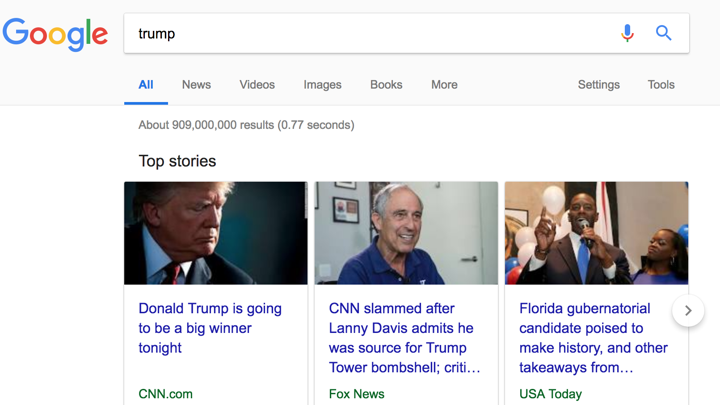 President Trump on Tuesday accused Google of manipulating its search engine to display negative coverage of his administration after Paula Bolyard published an article on the conservative site PJ Media alleging that 96% of results for "Trump" news were from left-leaning outlets.
Many on the Left have criticized the claim as baseless and unscientific, asserting that the mainstream media outlets that appear in the top results are the most reliable. Some on the Right have expressed agreement with Trump that major technology platforms work to censor conservative voices, although many have balked at the idea of using government regulation as a solution. Experts have argued that Google's search algorithm is biased, but in a technological sense—not a political sense.
Check out some other big stories this week: Primary Contests Held in Arizona and Florida, U.S. Court Rules North Carolina Gerrymandered Map Is Unconstitutional, and John McCain, Senator, Presidential Nominee and Prisoner of War, Dies at 81.
Snippets from the Left
Why Google Doesn't Rank Right-Wing Outlets Highly
The Atlantic
"Google says it is optimizing for relevant answers and high-quality content, not 'political ideology.' But—and this is the part Google won’t say—what if relevance and quality are not equally distributed across the media?
...
Of course the mainstream organizations—with larger staffs, generally better-trained journalists, and deeper roots in the field—would rank higher. The New York Times and Washington Post have thousands of journalists between them. Last year, The Times’ subscription revenue broke a billion dollars. The institutions of modern conservative journalism are simply not staffed or funded at the same level as what gets called the mainstream media.
...
Many right-wing outlets are embedded inside advocacy groups, like the Heritage Foundation’s The Daily Signal. Others are tiny blogs without the human resources to do original reporting: According to its staff page, HotAir, which Bolyard cited, has four editors (one of whom is pseudonymous). Even The Blaze, another outlet Bolyard cited, is reportedly down to fewer than 50 employees; the august Weekly Standard looks to have an editorial staff of only 35.
...
But even if the methodology is flawed, Google applies it equally to all the media organizations in its news universe. It might not be a 'free' marketplace of ideas, but it is a marketplace with fairly well-known and nonpartisan rules. If right-wing sites aren’t winning there, maybe Google isn’t the problem."
Snippets from the Right
BIASED MUCH? Top Google News Story — CNN Claims Google News Isn’t 'Rigged'
Daily Wire
"In the midst of the Tuesday fury over allegations that Google News uses a biased algorithm that results in far fewer links to conservative news sites, the top story on Google News was a CNN article defending Google News.
You can't make this stuff up, people.
...
The piece lays out what President Trump has said about reports of Google bias, then provides a platform for the search engine to deny, deny, deny.
...
The hilarity came after PJ Media conducted an informal study on Monday and found that liberal news outlets appear in Google News search results far more frequently than conservative outlets, which are often completely missing. When searching 'Trump,' for instance, CNN had 'nearly twice as many results returned as the second-place finisher, the Washington Post.'
...
Later on Tuesday, Trump warned Google, Facebook and Twitter, saying the social platforms are 'treading on very, very troubled territory and they have to be careful.'"
Snippets from the Center
Trump warns Google, Facebook and Twitter in row over bias
BBC News
"US President Donald Trump has warned Google, Twitter and Facebook they are 'treading on troubled territory' amid a row over perceived bias.
...
An aide said the administration was 'looking into' the issue of regulation.
...
Analysts say there is little to back up Mr Trump's claim and that it is unclear how he could take action.
Some said attempts to alter search engine results could violate the First Amendment, although his administration could make it difficult for Google by looking into its dominance of the market.
...
Mercedes Bunz, a senior lecturer in digital technology at King's College London, told BBC News it was highly unlikely that Google was deliberately ranking news according to political bias.
'Google's news algorithm is optimised for actuality and proximity of an event but it is generally not optimised to look for political orientation,' she said.
'However, it has a tendency to rank web pages higher that a lot of people link to.'"
Bonus: Snippets from a Technology Guru
Google doesn't have a political bias. It has a technology bias.
Big Think
"Trump is right about one thing: Google’s algorithms do have biases, but they’re almost surely technological—not political.
Google prioritizes search results based on three key criteria: relevancy, freshnes, and authoritativeness. Some of that prioritization process is controlled by bots. For example, a story filed seconds ago by a major media outlet would score higher in the ‘freshness’ category and would therefore have a greater chance of appearing higher up in the search results. Similarly, a story would be considered more ‘relevant’ if its headline and the words in the article closely align with your search query."
Discover more on this topic on AllSides.
Tags:
Media Bias
Technology
Google
Donald Trump
Story of the Week
News